What do Austin, Mankind, Goldust, and Degeneration-X have in store for us this week? Let’s find out!

Vince interviews Stone Cold Steve Austin in the ring. While Austin decries that Sunday will be “payback time,” we revisit last week’s episode when Austin cost Ahmed Johnson a chance to win the IC title. Austin then claims “wrong place, wrong time” for both the Nation of Domination and Ahmed Johnson.

Suddenly, Johnson emerges and heads to the ring. While the Hershey faithful chants “Aus-tin,” Johnson mentions that he lost respect for Austin due to his actions last week. He then challenges Austin to a match TONIGHT. As Austin questions the Hershey faithful, they respond with a healthy “hell yeah.” 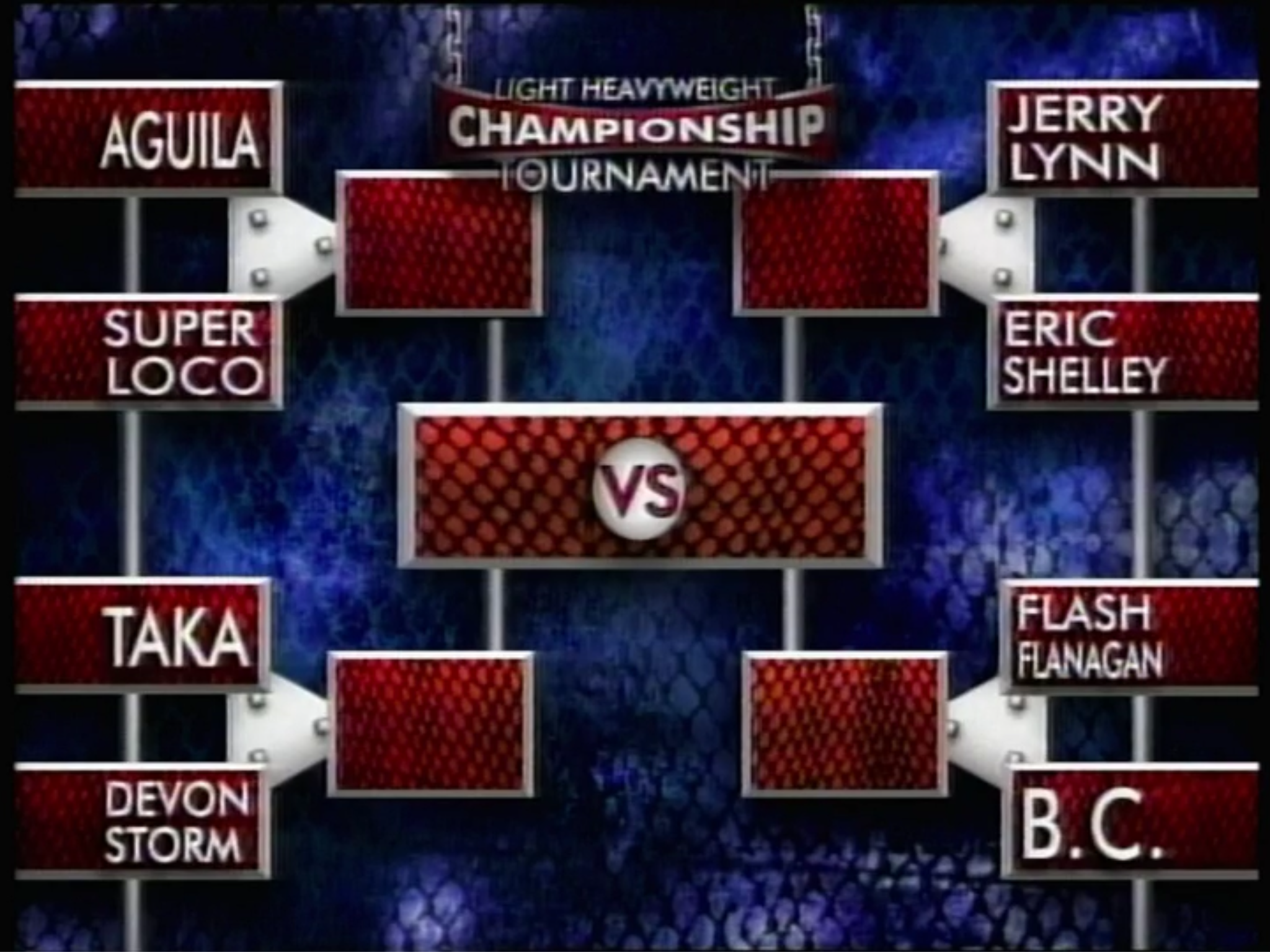 Summary: Tons of high spots, but Super Loco’s penchant for botching them stood out like a sore thumb.

In a pre-recorded interview, Terri tells a happy tale about being home in the Runnels family. On the other hand, Dustin chastises and tells her that he wasn’t the goody-goody stay-at-home husband and dad while she was on hiatus with Brian Pillman. He then drops the “I found somebody” bomb on her while Terri sits in disbelief. As Terri cries in emotional pain, Dustin’s “starting over” on a quest to fulfill himself. He then angrily states “you can take this ring, this marriage, Marlena, and you can shove it up your ass!” DAMN!

RAW is WAR is sponsored by Tiger Electronics and Milton Bradley’s Karate Fighters.

Lengthy video airs of the build-up to the WWF title match at the upcoming PPV.

Next, Ahmed Johnson comes to the ring anticipating Austin but gets Kane instead. As Kane reverses an Irish whip, he chokeslams Johnson. He then sets the turnbuckles ablaze and tombstones Johnson twice. Abruptly, Mankind hits the ring and applies the Mandible claw to Paul Bearer. He then CREAMS Kane with a turnbuckle bolt, but Kane sat up shortly afterward.

Afterward, Austin heads to the ring and proves his point about Ahmed Johnson. When he challenges “anyone in the dressing room,” the Nation of Domination eventually appears at the entrance. The Hershey faithful then chants “Rocky sucks” while the Road Warriors ambush the NoD from behind. After Austin supplies Kama Mustafa with a Stone Cold Stunner, officials separate the Road Warriors and NoD. Austin then smiles as he exits stage left.

At the entrance, “Ravishing” Rick Rude introduces Degeneration-X. Michael Cole then interviews WWF European champion Shawn Michaels in the ring while we revisit last week’s show when Michaels interfered in the WWF title match. In response to the Hershey faithful’s chant of “Shawn is gay,” Michaels kisses HHH on the lips. He then kisses Chyna the same way. Methinks he goes both ways.

While the Hershey faithful chastises Degeneration-X's bedroom habits, HHH and Chyna school-boy Cole. Michaels then refers to himself as God, but HHH stops him and subtly insults Hogan and WCW. When Michaels mentions his appearance next week, he promises to be “naked” and taunts Ken Shamrock. HHH then summons Commissioner Slaughter.

Speaking of Slaughter, he comes to the ring, but HHH & Michaels put welder’s helmets on. But that’s not enough! Next, they apply windshield wipers to the helmets to completely insult Slaughter. The commissioner then declares that Michaels will face Shamrock TONIGHT much to Michaels’ chagrin. 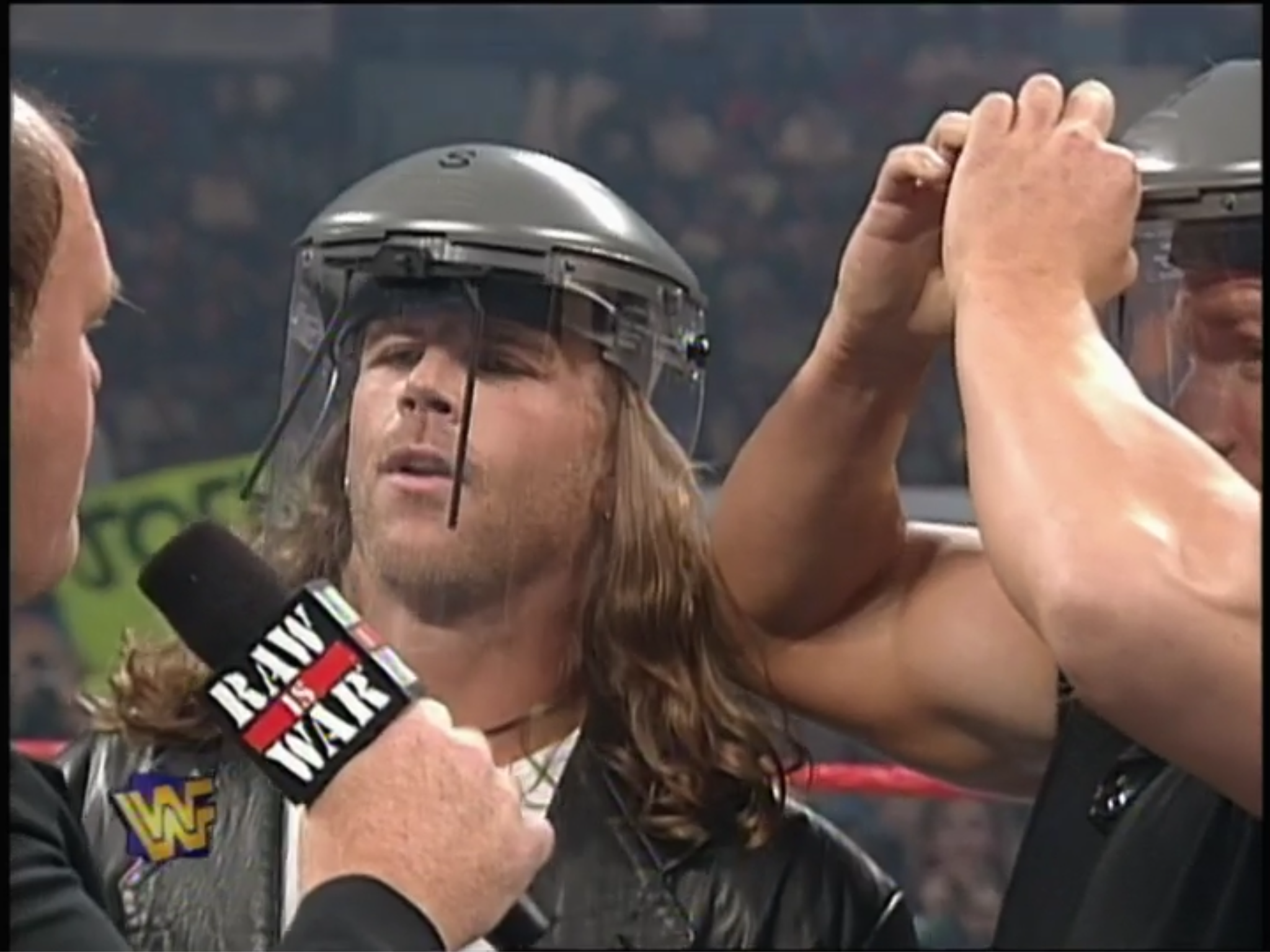 Prior to the commercial break, Mero disturbs Sable in her dressing room while she’s got her top down but her back turned.

Before the next match, Vega cuts a pre-taped promo on Mero.

After the match, Cole attempts to interview Sable at ringside; however, Mero interrupts and tells “Gilligan” to interview him instead.

Summary: Pointless gimmick match acting as an appetizer for the US versus Canada match at the PPV.

After the match, Vader gets pummeled until an unknown enters the ring and throws martial arts kicks. Smartly, Neidhart tackles him thinking he’s just an intruding fan while Vader protects him. For those unaware, this marks Steve Blackmon’s WWF debut.

Prior to the next match, we revisit last week’s episode when Jammes and Gunn cost Los Boricuas the match against the Road Warriors.

Prior to the next match, we revisit last week’s episode when Shamrock made Bret tap while the referee was down. Later, Michaels interfered which allowed Bret to retain the WWF title.

Summary: Good TV match, but it was extremely obvious (almost too obvious at times) that Michaels was walking Shamrock through the whole match.

After the match, HHH delivers the Pedigree to Shamrock onto the Haliburton as the show goes off the air.

Conclusion: Plusses of the show include the Goldust heel turn, Degeneration-X making Slaughter look foolish, and Austin playing mind games with Johnson. Minuses involve the rest of the episode. Although matches were teased, the upcoming PPV is completely about the main event. I fear for the undercard. Can Austin, Degeneration-X, and Goldust cause a shift in the ratings this week?

Who won? Nope, Nitro SLAUGHTERS RAW again, this time by a 1.4 margin. To say the least, RAW needs a huge kickstart to overtake Nitro. I wonder what it’ll take for it to happen.

IN OTHER NEWS THIS WEEK: Remember Bischoff’s upcoming surprise next week? WE HAVE A HEEL TURN, er, I mean, a HUGE defection/acquisition! Bret Hart, who was in Calgary while this episode aired, officially gave notice to the WWF so that he can sign with WCW. But wait! He’s still the WWF champion! While It's obvious that Bret will have to lose the belt to Michaels at the PPV, the story leaked to the Internet on 11/3. That might not seem like much now, but back then it was UNFATHOMABLE! the WWF will have to do something truly radical to explain Bret’s sudden departure. More on this story will be covered at a later date, so...