Can Shamrock become WWF champion by defeating Bret? Will Johnson beat Owen for the IC title? How will Austin be involved? Let’s find out!

To open the show, Vince interviews the Nation of Domination in the ring. As they make their entrance, we revisit last week’s episode and the graffiti-laden locker room allegedly perpetrated by the Hart Foundation. Faarooq then questions Vince about racism in the WWF. Although Vince apologizes, Faarooq chastises him for furthering an anti-African-American agenda. 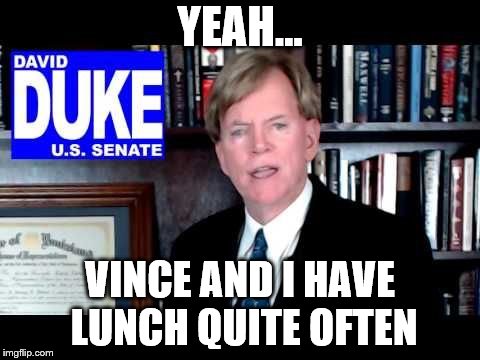 I don’t think so, Senator.

On cue, Shawn Michaels appears on the Titantron to offer his $.02 and refers to Bret as the “Grand Wizard.” When HHH mentions that the Hart Foundation dropped the “N-word” last week, the NoD rushes up the ramp and brawls with the Hart Foundation. Apparently, Bret injures his ankle during the melee. I smell foreshadowing.

After the match, Michaels stands on the broadcast table and tells McMahon to “suck it.” I wonder how Milton-Bradley felt about that.

JIM CORNETTE’S SHOOT: This week, Cornette examines the word ICON and how often it’s tossed around in professional wrestling. He then mimics Savage and runs down Michaels for being petulant. To put the cherry on top, Cornette dismisses the cage match at Halloween Havoc ‘97 as two aging wrestlers presenting a farce for the wrestling masses. He then puts over Undertaker, Ric Flair, and Steve Austin as true icons.

HOT TAKE; Of the three shoots thus far, this is Cornette’s finest work. He not only disparages WCW but also criticizes Bret and Michaels as well.

Survivor Series ‘97 will be sponsored by Milton-Bradley's Karate Fighters.

Prior to the show going on the air, the WWF celebrated Oklahoma legends:

Prior to the next match, we once again revisit Summerslam ‘97 when Owen inadvertently yet severely injured Steve Austin with a piledriver. Also, Vince shills the November ‘97 issue of RAW Magazine. 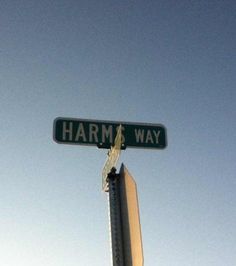 Summary: For understandable reasons, the Tulsa faithful’s sole reaction was for Austin’s involvement. HE IS OVER! Of course, the reasoning behind his attack was to preserve Owen’s title reign for the PPV.

After the match, Austin exits through the Tulsa faithful while the NoD stands at the top of the ramp. 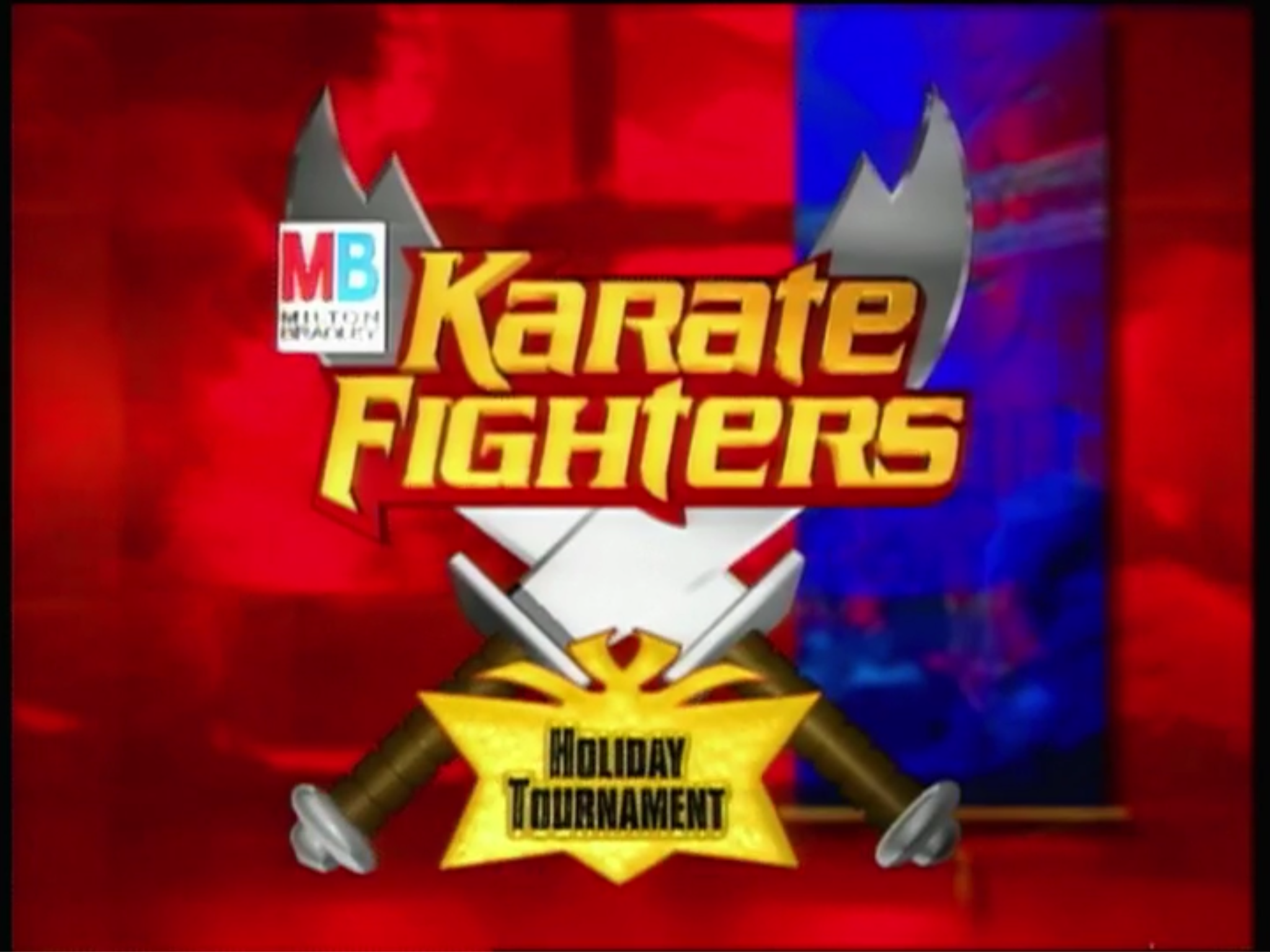 KARATE FIGHTERS HOLIDAY TOURNAMENT: Are you kidding me? Parody versions of both Vince and JR throw it right to the “arena.” It’s the battle of the Lawlers as Jerry faces Brian Christopher. Lawler wins and taunts his son about calling his mama. Here’s the bracket: 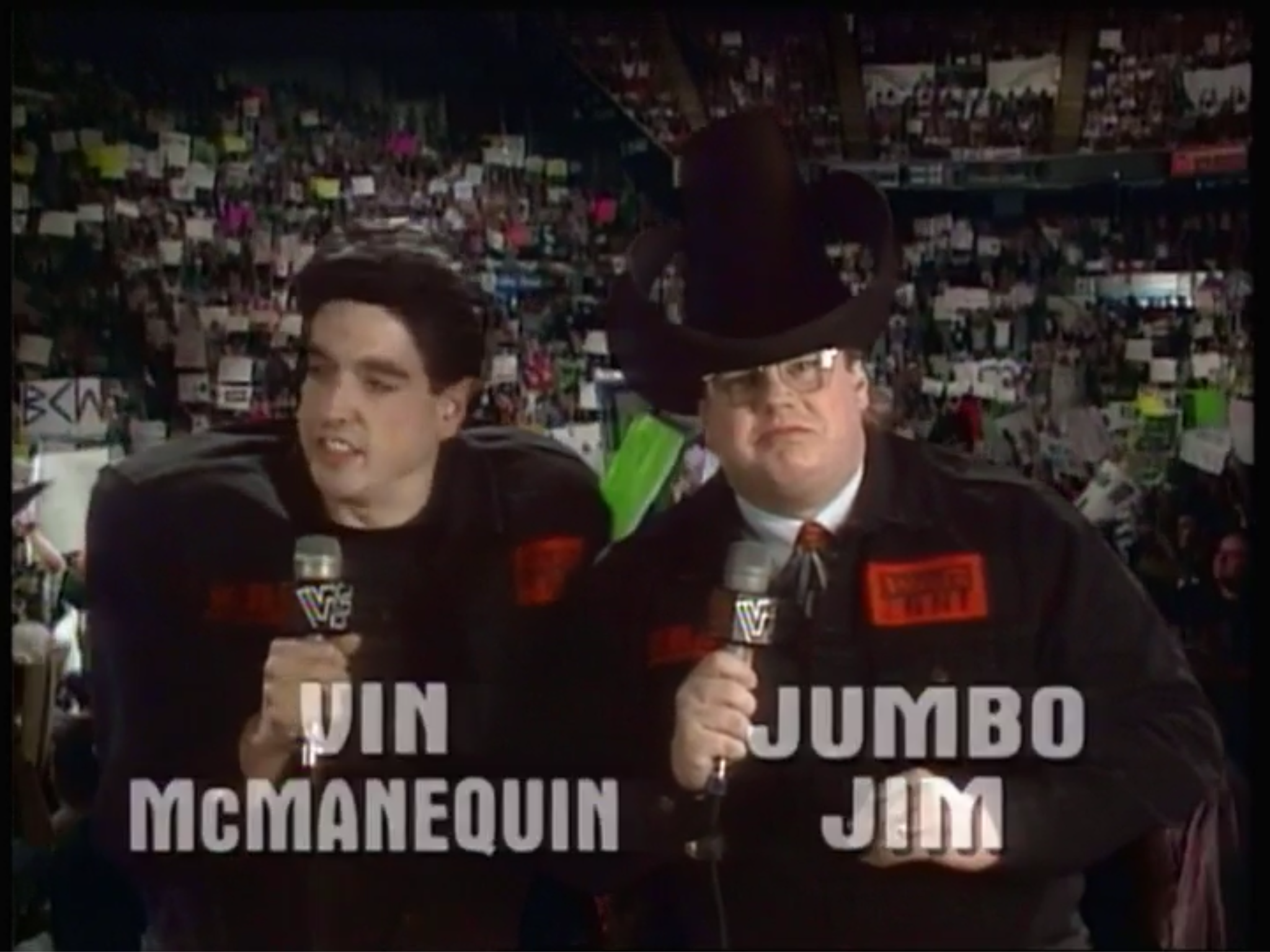 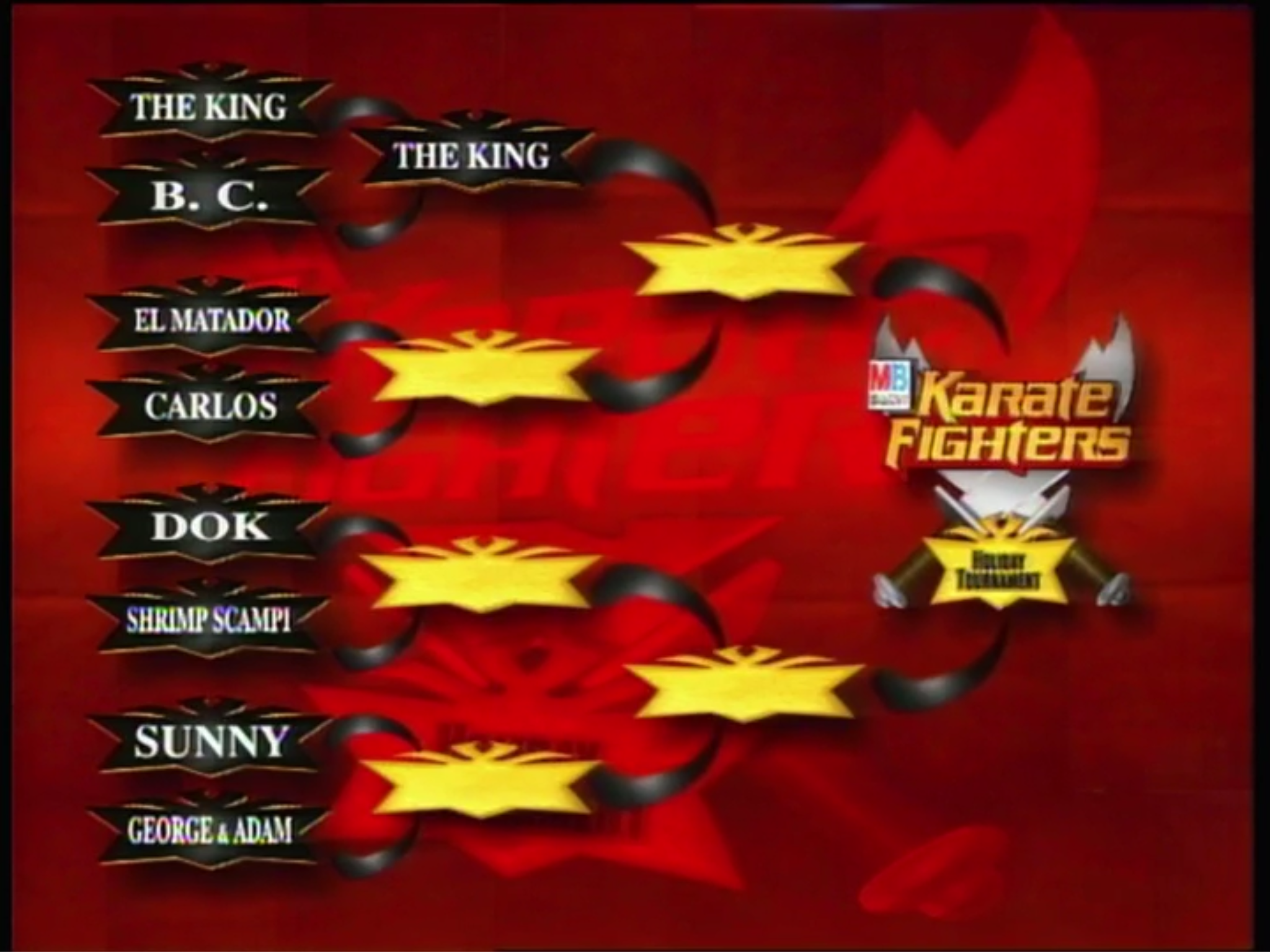 Methinks the garlic in the shrimp scampi may overpower Dok.

In the ring JR interviews Mankind while we revisit last week’s episode when Kane destroyed Dude Love. Mankind then states that he’ll pick up where Dude Love left off and make his “Uncle Paul’s life a living hell.” Upon comparing himself to a roadblock, Mankind challenges Kane. Why would he compare himself to a WCW jobber?

Abruptly, Commissioner Slaughter heads to the ring yet refuses to sanction a match between Mankind and Kane. Mankind doesn’t handle Slaughter’s ruling kindly and applies a Mandible claw to him. Officials hit the ring to stop Mankind’s rampage.

Prior to the next match, we revisit the scrum between the NoD and Hart Foundation where Bret injured his ankle. Could it lead to the “World’s Most Dangerous Man” becoming WWF champion?

Match 3 for the WWF title: Bret “Hitman” Hart (champion w/o the Hart Foundation) versus Ken Shamrock

Summary: Solid match where Bret carried Shamrock until the schmozz finish. The table is certainly set for the WWF title match at the PPV, but who knows how that situation will clear up.

With Bret backstage, he cuts a promo on Michaels claiming 100% Canadian support at the PPV. RAW is WAR is sponsored by Milton-Bradley Karate Fighters and M&M’s.

After Vince and JR announce a match between Mankind and Kane at the PPV, Bearer and Kane emerge to discuss said match. Bearer then dismisses Mankind as a challenge and speaks directly to the Undertaker. I would be remiss if I didn’t mention that instead of being under normal ring lights, this interview was cast under a red light.

From the locker room, Rude introduces Michaels who moons everyone in response to Bret. Hopefully, his schtick will become more amusing rather than sophomoric as he furthers his character.

In a pre-recorded interview, Jeff Jarrett states that Vince “put limitations” upon Jarrett’s character. Next, he discusses during his departure with Vince that he “no longer runs (his) life.” In WCW, Jarrett feels that he didn’t receive any opportunity whatsoever. **cough**US title**cough** He then mentions Eric Bischoff’s “clique” as the ones who “get the spotlight.” Following that, he says that “true in-ring ability does not count in WCW.” That was certainly true for the main event last night.

He continues by noting that WCW lacks excitement during its arena shows. “Their top six to eight wrestlers are all over their forties” quips Jarrett. To conclude the interview, he declares that “wrestling’s a young man’s game.”

HOT TAKE: I’ve said it before, and I’ll say it again. Pepsi takes shots at Coke for being #1 whereas Coke doesn’t recognize them during their ads. The WWF doesn’t need to take potshots at WCW to reclaim the #1 spot, it needs to improve its product. 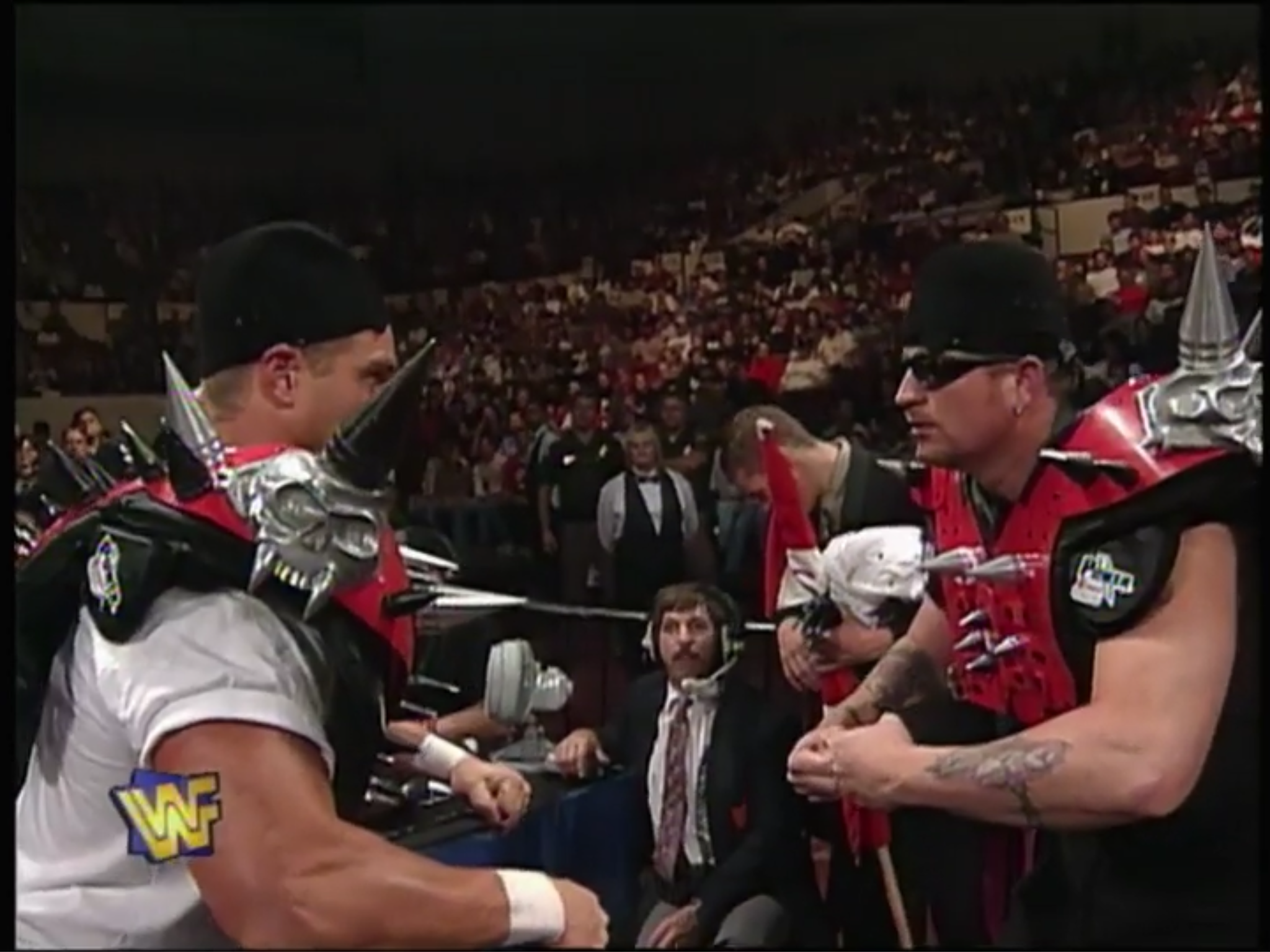 Summary: Showcase match for the Road Warriors with some sports entertainment from Gunn and Jammes.

After the match, Gunn and Jammes high-tailed it backstage with both the Road Warriors and Los Boricuas hot on their trail.

Back in the locker room, Johnson cuts an intense promo on Austin to close out the show.

Conclusion: Three, count ‘em three, title matches and not a truly good one in the bunch. While Survivor Series ‘97 was properly shilled, this show lacked sizzle. If this is the way the WWF telecasts its taped versions of RAW is WAR, they’ll be losing the ratings battle for a whole lot longer. Did they even come close this week?

Who won? Nope, Nitro SLAUGHTERED them by over a point-and-a-half. Next week, Nitro hails from Philly while RAW is WAR emanates from Hershey, a mere ninety-five miles. While nothing's promised on Nitro, the light-heavyweight tournament begins on RAW is WAR.

IN OTHER NEWS THIS WEEK: ECW has a NEW World champion.