It’s the go-home show for Halloween Havoc ‘97! What sorts of chaos will occur and how will it impact the PPV? Let’s find out!

As the show begins, Hennig, Konnan, Vincent, and Norton are laid out in the back. Suddenly, Eric Bischoff, “Hollywood” Hogan, and “Macho Man” Randy Savage arrive and are astounded at the carnage. The letters D-D-P are spray-painted on the concrete, and a Piper t-shirt as well as a baseball bat are shown.

Bischoff, Hogan, and Savage then come to the ring, and Bischoff depicts the bat as “proof.” As he refers to Piper as “scum,” Bischoff runs down both Sting and DDP. Hogan then points out that a steel cage hangs above the ring. Woohoo! While WCW security confiscates a fan’s sign, Bischoff calls out Piper, and the Biloxi faithful chant “Pi-per.” Excellent nuclear opening to the show.

We then revisit last week’s show when the real Sting dropped Bagwell like a bad habit, scared the bejeezus out of Hogan, and handed the World title belt to Piper.

We then revisit last week’s show when DDP supposedly defeated Hennig for the US title. Although Piper raised DDP’s arm, referee Randy Anderson’s ruling of a DQ stood; hence, Hennig remained US champion.

The 1-800-COLLECT Slam of the Week is Goldberg’s Jackhammer.

In the aisle, Goldberg asks “Who’s next?” 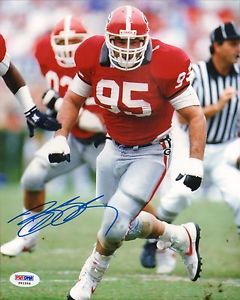 Summary: Mortis brought some workrate, but Mongo’s a runaway freight train on his way to the PPV.

At ringside, “Mean” Gene Okerlund mentions that Mongo’s opponent is yet to be determined. As Debra interrupts, she doesn’t reveal who it is but chastises Mongo for his being malcontent. Mongo then steals a sign from Stevie Richards, rips it to shreds, and violently tosses it in his face.

Another Raven soliloquy airs. I sneak downstairs to do laundry.

Lucha libre video by Tenay airs with a special look at Mysterio. In fact, the stipulation of mask versus belt was added to the Cruiserweight title match at the PPV. Will Mysterio become champion or will his face be revealed worldwide? The PPV awaits...

Summary: Showcase match for Nagata en route to his encounter with Dragon at the PPV.

After the match, Dragon chases after Onoo until Nagata seizes him. They then double-team Dragon, and Nagata applies the Nagata lock to Dragon.

Los Villanos IV y V along with Damien come to the ring anticipating a six-man luchador match. Unfortunately for them, Giant emerges through the entrance and grabs the microphone. He then runs down Kevin Nash for “hiding” behind a knee injury. When Damien takes exception to Giant’s monopolization of air time, Giant not only demolishes him but also los Villanos. In fact, he punctuates the segment with a powerbomb. In my eyes, he also de-pushed the luchadores singlehandedly.

Prior to the next match, we revisit last week’s episode when Eddie STOLE Mysterio’s mask mid-match. The horra!

Summary: Nothing more than an appetizer for Mysterio (mask) versus Eddie (belt) at the PPV.

After the match, Eddie tries to remove Mysterio’s mask again, and Jacqueline runs in to pull Disco off the second turnbuckle. When Disco dismisses her, Jacqueline jumps on his back and pummels him much to the delight of the Biloxi faithful. In a clear moment of insanity, Disco retrieves the TV belt before heading backstage allowing Jacqueline to nail him in the aisle. Disco then scampers away.

Bischoff, Savage, and Hogan storm the ring again, and the Biloxi faithful chant “We Want Sting.” As an irate Bischoff declares that “nobody leaves the building,” they call out Piper, DDP, and Sting. Hogan then wants the cage lowered, and Bischoff drops Vince McMahon’s name. Before they leave, Bischoff points to a sign promoting Assault on Devil’s Island.

Match 6 for the WCW US title: Curt Hennig (champion) versus Dean Malenko Summary: Although not out of the question, a Malenko upset was brewing until the very end. This was a decent match where Malenko took control of the match yet succumbed to defeat.

Nitro Girls dance at the entrance while wearing blue jeans.

Prior to the next match, we revisit last week’s episode when Norton beat Traylor with help from a foreign object.

Summary: Traylor appeared to be motivated yet felt the wrath of the nWo.

After the match, a partially-blinded Traylor attacks Norton and Vincent, but more nWo members storm the ring. They then pummel Traylor as the segment ends.

Promo for Halloween Havoc ‘97 airs. It will be LIVE on PPV this Sunday. Have you placed your order yet?

Summary: Extremely competitive match as Booker T gave it his all but came up short against the former World champion.

In the ring, Okerlund interviews Luger who compliments Booker T. Sportsmanship! As he touts Zbyszko’s impartiality, Zbyszko comes to the ring to clarify his neutral position despite his loathing of Hall and respect for Luger. Although the match should be fascinating, the build-up here suffered mightily.

Nitro Girls dance at the entrance wearing silver and white.

Prior to the next match, Hall conducts his customary survey, but Biloxi is WCW country. As he describes Nash as “Big Grouchy,” he warns Giant of Nash’s imminent return. Hall then cuts a promo on Luger before threatening Zbyszko. 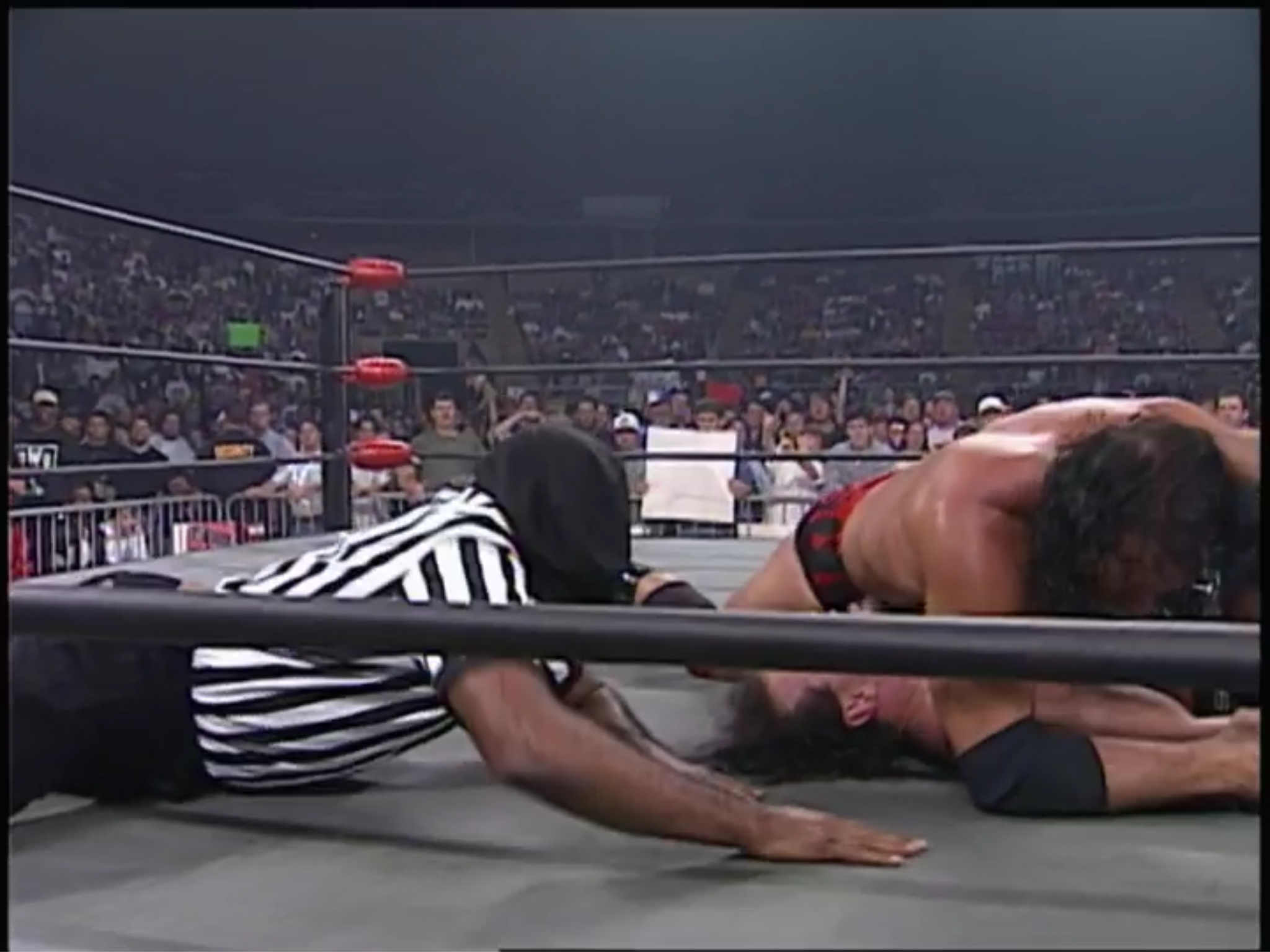 Summary: Screwy finish to a mediocre main event, but who’s the mystery man?

After the match, Hall says “there’s more than one special ref.”

Immediately, Bischoff, Savage, and Hogan approach the ring again, and Bischoff name-drops McMahon again. After Bischoff plugs Assault on Devil’s Island, Hogan runs down Piper, DDP, and Sting. Suddenly, “Sting” emerges through the entrance while another pair of “Sting” clones enter the ring. As one hooks a sleeper on Hogan, the other annihilates Savage. They then remove their masks and wigs to reveal themselves as Piper and DDP. 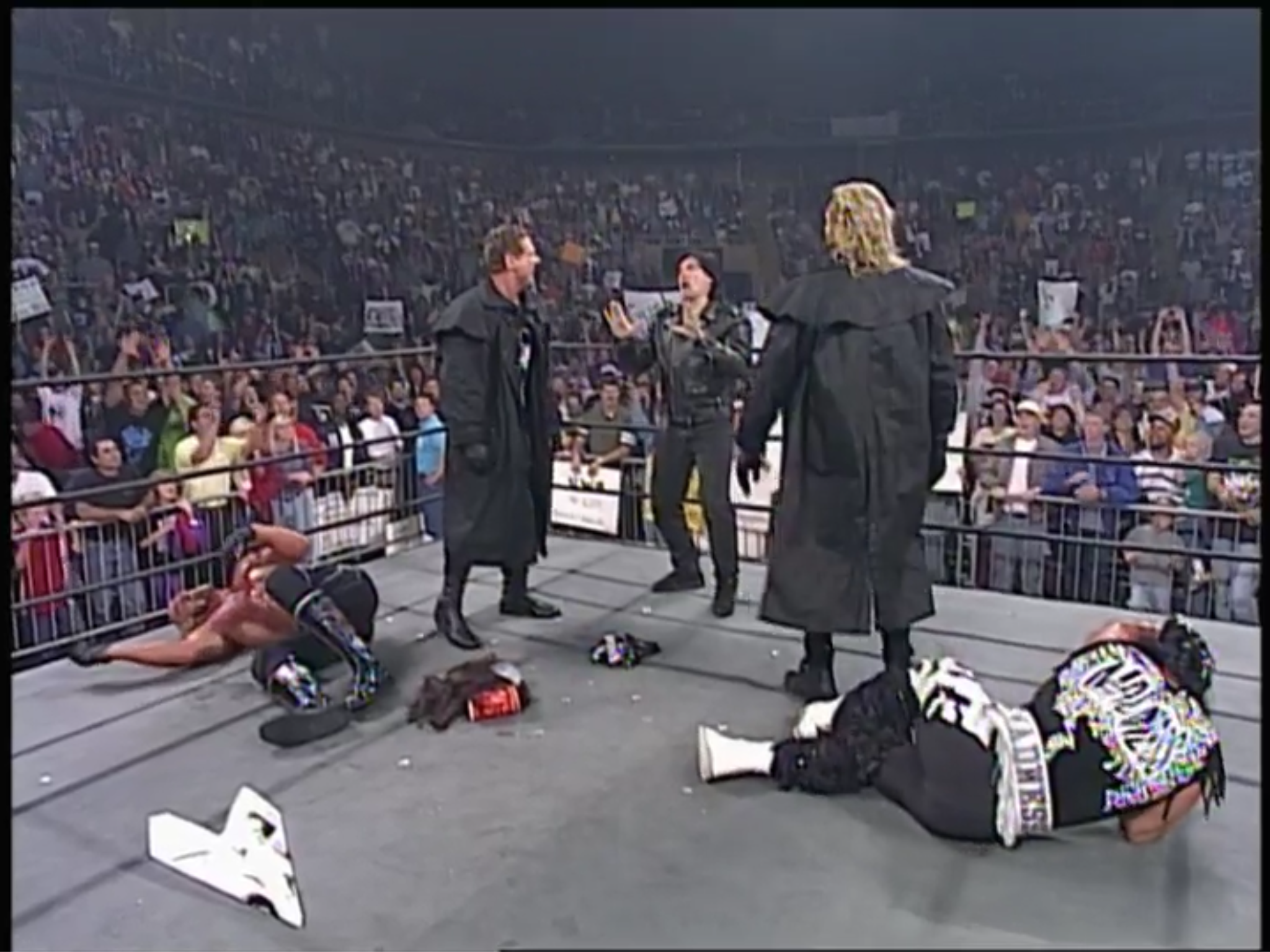 They then pummel a terrified Bischoff before Norton and Hennig ambush the third “Sting” in the aisle. While the nWo gangs up on Piper and DDP, the cage lowers. As the cage reaches the floor, Sting repels from the ceiling. He then proceeds to beat up Bischoff as Hogan and Savage scamper away to end the show. 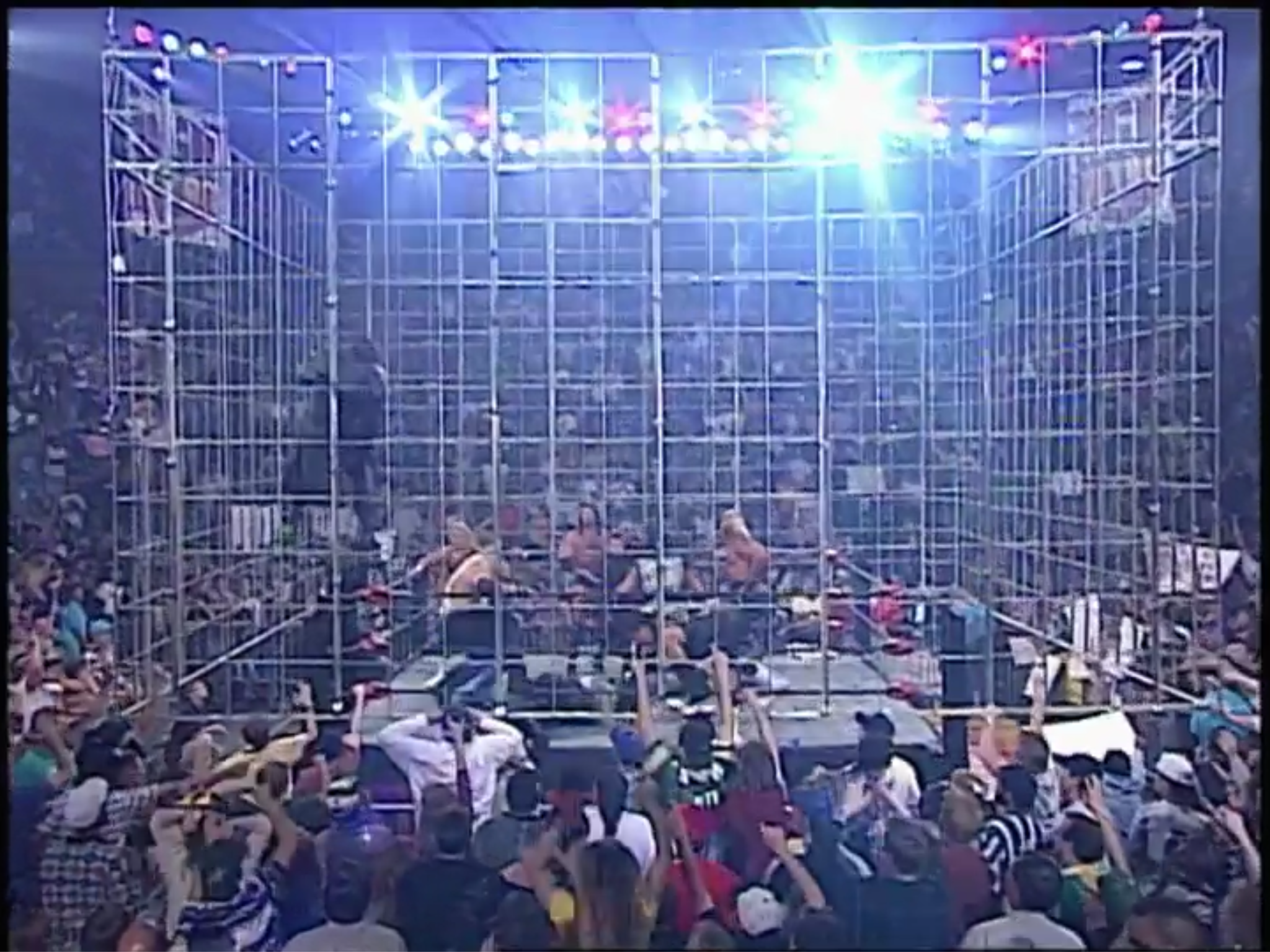 Conclusion: Yet another sizzling-hot ending to Nitro that exemplified the true meaning of go-home show. The PPV looks locked and loaded, and WCW looks better than ever. As a matter of fact, WCW looked much better against the nWo on this show than in previous ones. Are you ready for Halloween Havoc ‘97?

Glad we can agree on something, Khloe. What’s on RAW is WAR?