Can the Steiners finally get over the hump and win the tag titles? Will DDP supplant Hennig as the next US champion? What’s new with Sting this week? Just how sneaky IS Eddie Guerrero? Let’s find out!

To begin the program, “Hollywood” Hogan, Eric Bischoff, and an injured “Macho Man” Randy Savage emerge through the entrance minus the World title belt. Bischoff then shills Assault on Devil’s Island and dares the fans to advertise it on next week’s RAW is WAR. While he’s miffed that Piper scheduled a tag title defense TONIGHT, he’s also perturbed about what happened to Savage last week. Hogan then runs down Piper and vows to wreak havoc all over Tampa. He should probably call Jameis Winston to do just that. Ahem...

We then revisit last week’s show when DDP FLATTENED Savage followed by the nWo response.

Summary: Good high-flying opener as Eddie prepares for his title defense against Mysterio at the PPV.

After the match, Eddie tries to remove the mask, but Psicosis hightails it before he succeeds. I smell shenanigans.

Video airs about the sacred masks of the luchadores.

In the ring, “Mean” Gene Okerlund interviews “Rowdy” Roddy Piper who put the World title belt in a safe place. Piper then confirms the tag title match scheduled for tonight.

We then revisit last week’s show when Piper swung the World title overhead to fend off the nWo.

Nitro Girls dance at the entrance, but no wardrobe malfunctions occur.

Prior to the next match, we revisit last week’s episode when Jarrett got between Mongo and Debra, but Mongo told him to MYOB. 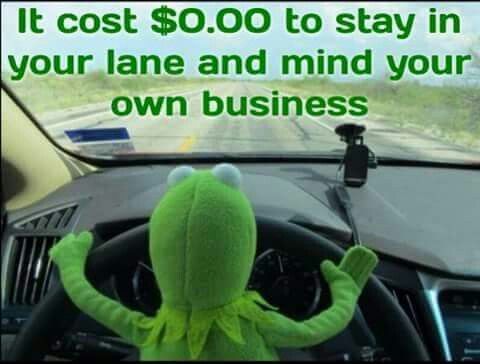 Summary: Showcase match for Mongo. I wonder what color Regal painted his doghouse.

At the entrance, Okerlund interviews Debra. He mentions that Jeff Jarrett is no longer affiliated with WCW, and Debra confirms it. Mongo interrupts and calls Jarrett a “quitter.” When Mongo acts misogynistically toward her, Debra responds that she has a “plan.”

On WCW Saturday Night, Rey Mysterio faces Buff Bagwell. I wonder if one of them will succumb to a small package. Double ahem.

Prior to the next match, Onoo cuts a pre-recorded promo on Ultimo Dragon in split-screen. He then notes that Dragon will face Nagata at the PPV. 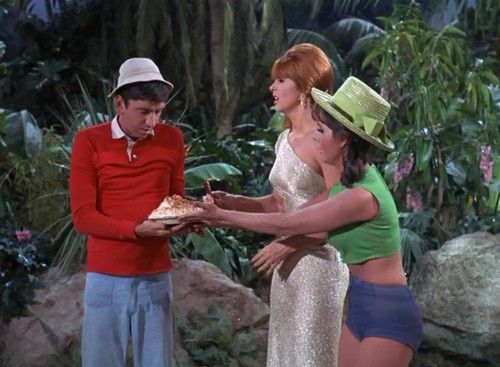 Video featuring Raven in a baby nursery airs. Perhaps this was a snippet of his time at that age:

Submit tapes of your Nitro Party to WCW!

Prior to the next match, Hall grabs the microphone to take a survey. Tampa is definitely nWo country. Hall then discusses Nash’s knee injury and gets popped in the mouth by a flying concession. D’oh! 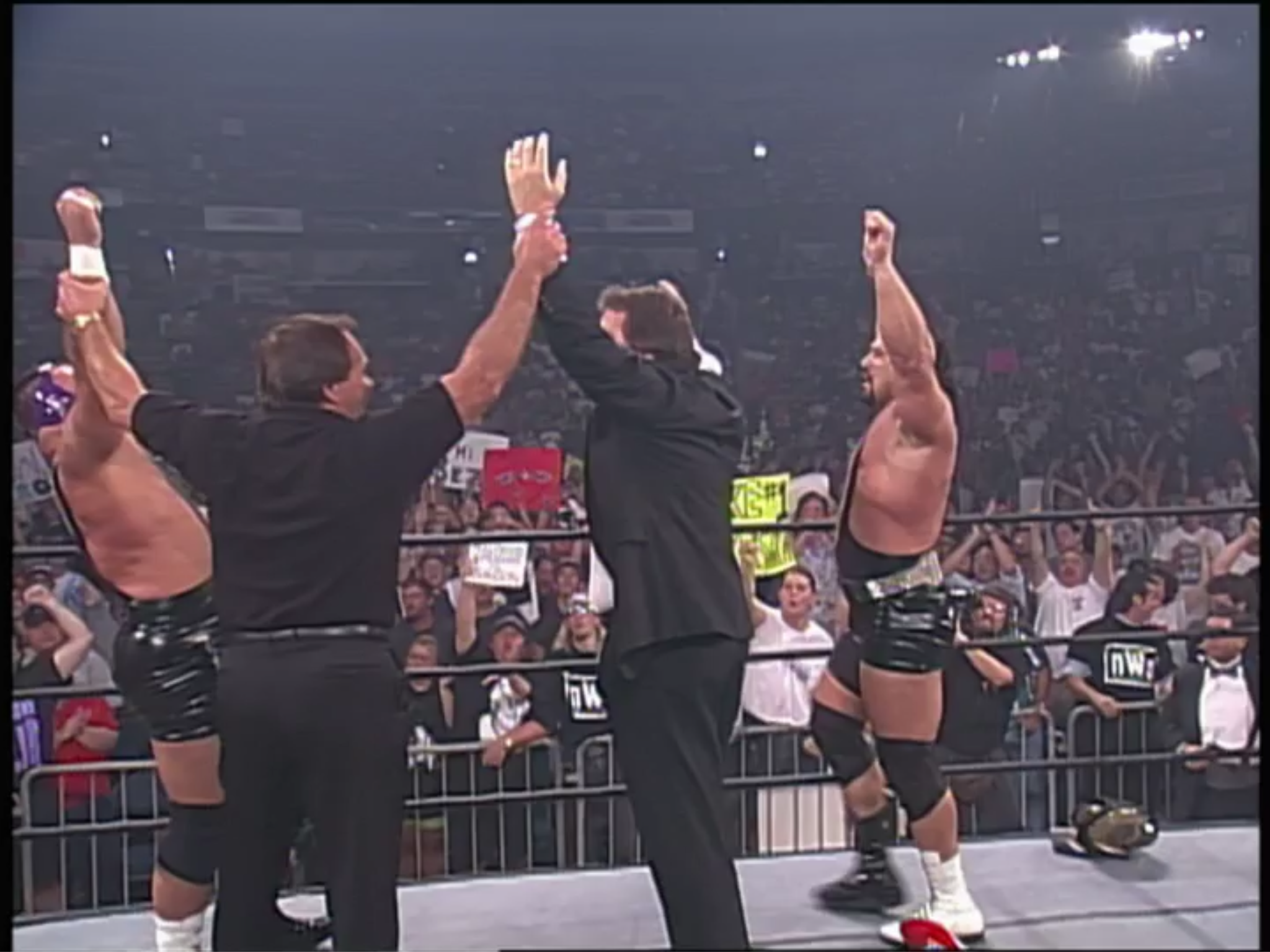 Summary: Monumental victory for the Steiners.

On a platform, the Nitro Girls dance in black.

Summary: While Malenko gets the hometown victory, Eddie disgraces Mysterio.

In the ring, Okerlund interviews Piper again. Piper declares that Zbyszko is a sanctioned referee, and the decision in the tag title match stands. When Piper turns his attention to Hogan, Bischoff and Savage come to the ring. Bischoff demands the World title back as well as the tag titles. All of a sudden, the nWo makes their presence felt. Not to be outdone, “Sting” emerges and heads to the ring.

When “Sting” stands alongside Piper, he motions for the nWo to disperse. Next, he HAMMERS Piper with the bat. “Sting” then removes his mask and wig to reveal himself as Hogan. As the nWo beats up Piper, the Tampa faithful chants “We Want Sting.”

Promo airs for Halloween Havoc ‘97 LIVE on PPV on 10/26. Featured is Flair versus Hennig.

After the match, Bagwell sprays Traylor’s back with paint.

Summary: More storyline than match as the Jacqueline factor played a part in the outcome.

After a commercial break, the Nitro Girls distract Schiavone from announcing properly. Can you blame him?

Match 9 for the WCW US title: Curt Hennig (champion) versus Diamond Dallas Page

After a commercial break, Piper and Anderson discuss the match while DDP awaits the decision in the ring. Piper then raises DDP’s hand. WE HAVE A NEW CHAMPION! Immediately, they turn their attention to an incoming Hogan. The nWo then fills the ring and outnumbers DDP and Piper. Despite wearing a neck brace, Savage mounts the top turnbuckle and delivers the big elbow to DDP. What a ruse! Hogan then leg-drops DDP, and Savage drops another big elbow. When Hogan replaces DDP with Piper, Savage hits another big elbow. 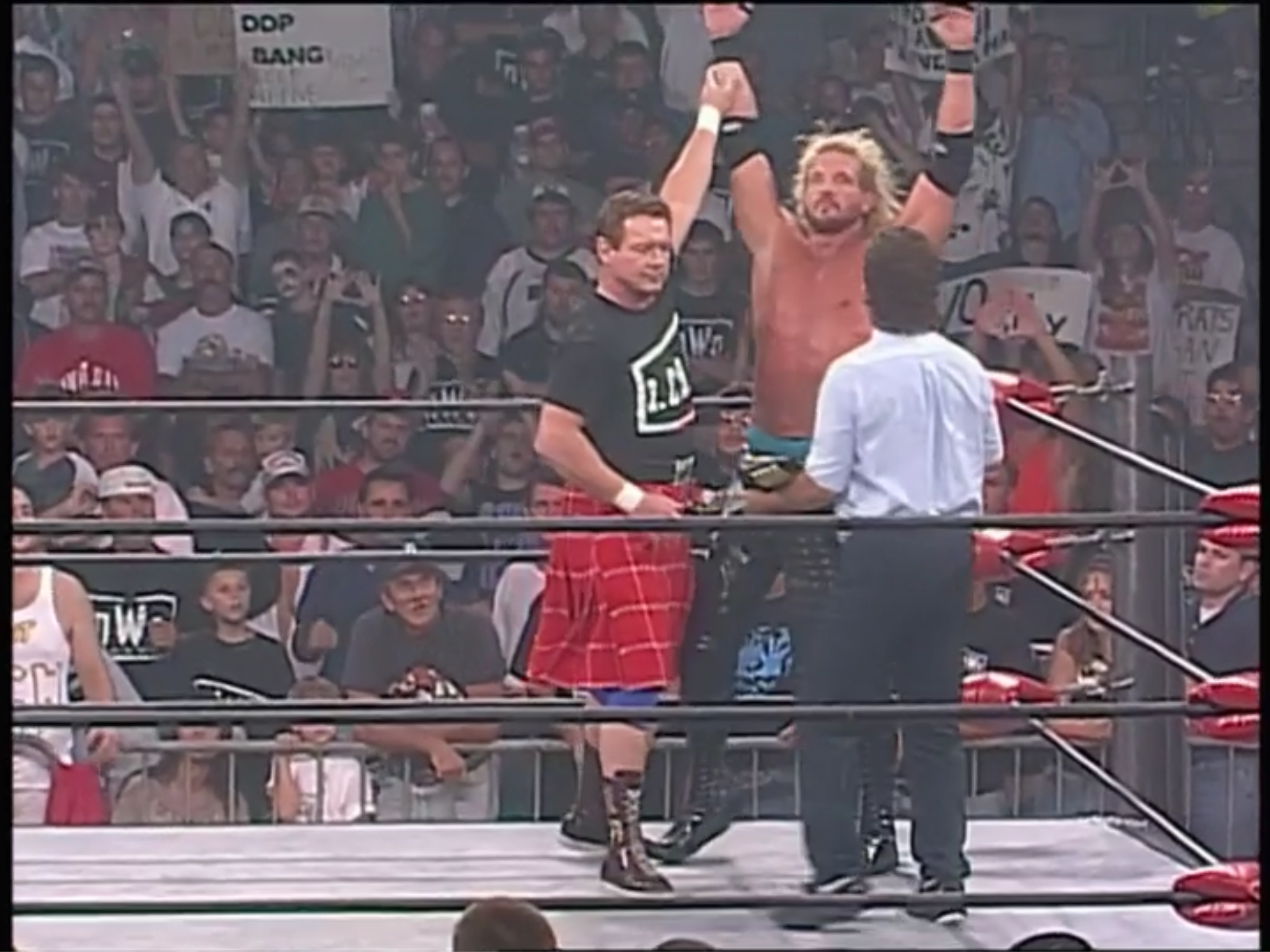 Suddenly, Sting appears among the Tampa faithful. He then makes his way to the ring through them. In the meantime, several other “Sting” imposters permeate the arena. While the nWo pummels each imposter, a trio of them enter the ring. The nWo destroys the first two, but the third no-sells a shot from Bagwell. 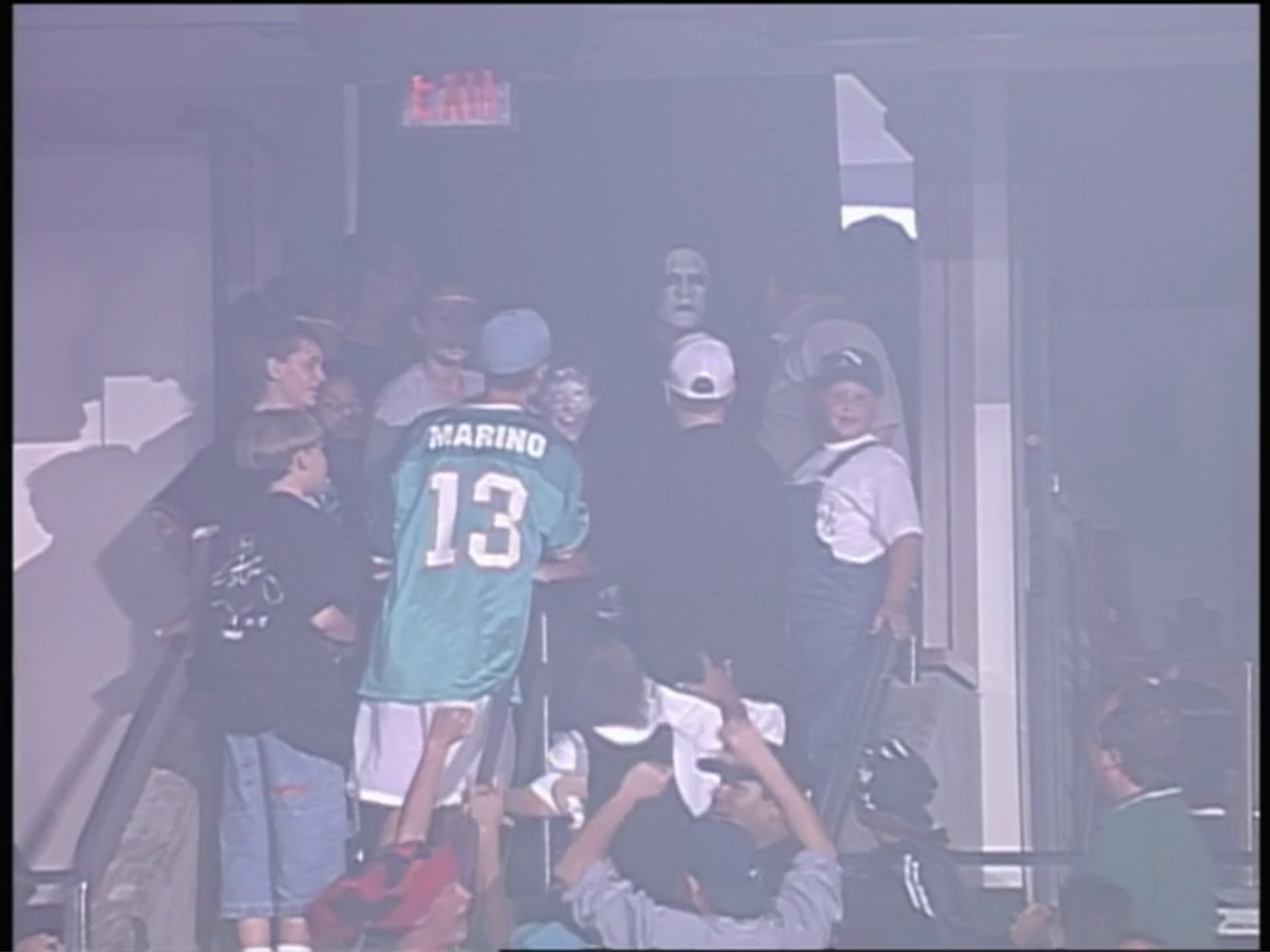 Sting then delivers the Scorpion death drop to Bagwell, and the Tampa faithful ERUPTS. When Hogan realizes what’s in front of him, he panics and probably soils his underwear. Piper then receives the World title belt from Sting, stands alongside him, and swings the it overhead again as the nWo backpedals to end the show. 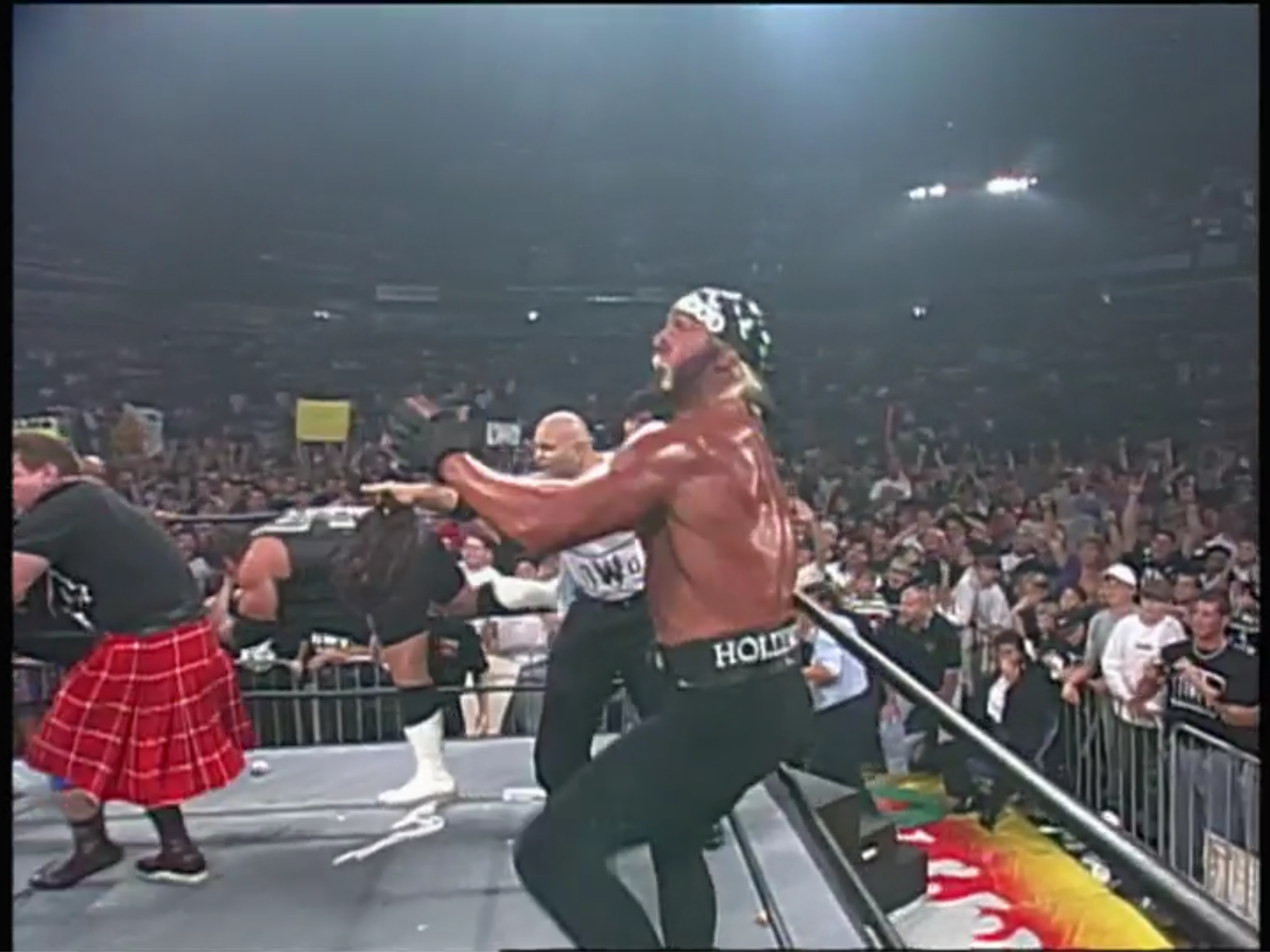 Conclusion: Blazing hot ending to an episode with one and possibly two title changes. With Nash out with a knee injury, it made sense to remove the tag titles from the nWo. The controversy at the end of the main event causes us to want to watch the next episode to find out the result. With RAW is WAR being taped, I doubt they can even touch the quality of this episode. What’s on RAW is WAR?