While Benoit is in the main event, and Eddie defends the Cruiserweight title against Dragon, what else will WCW do to maintain its ratings dominance? Let’s find out!

As the show begins, WCW offers its best wishes to the Pillman family in honor of Brian: 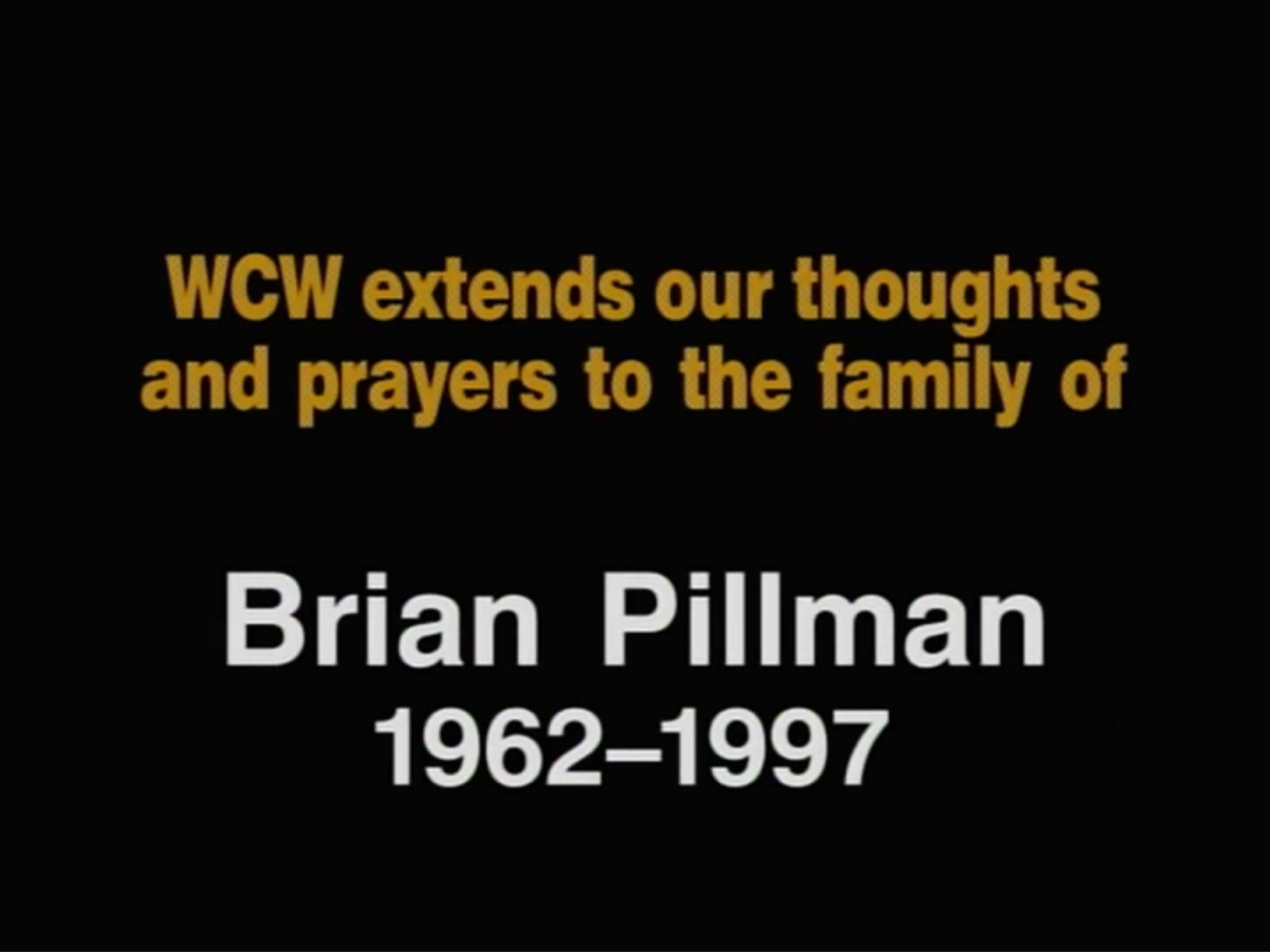 Nitro Girls begin the show, and...Oh. My. God. As if to truly honor Pillman's unpredictability, Chae inadvertently has a wardrobe malfunction. 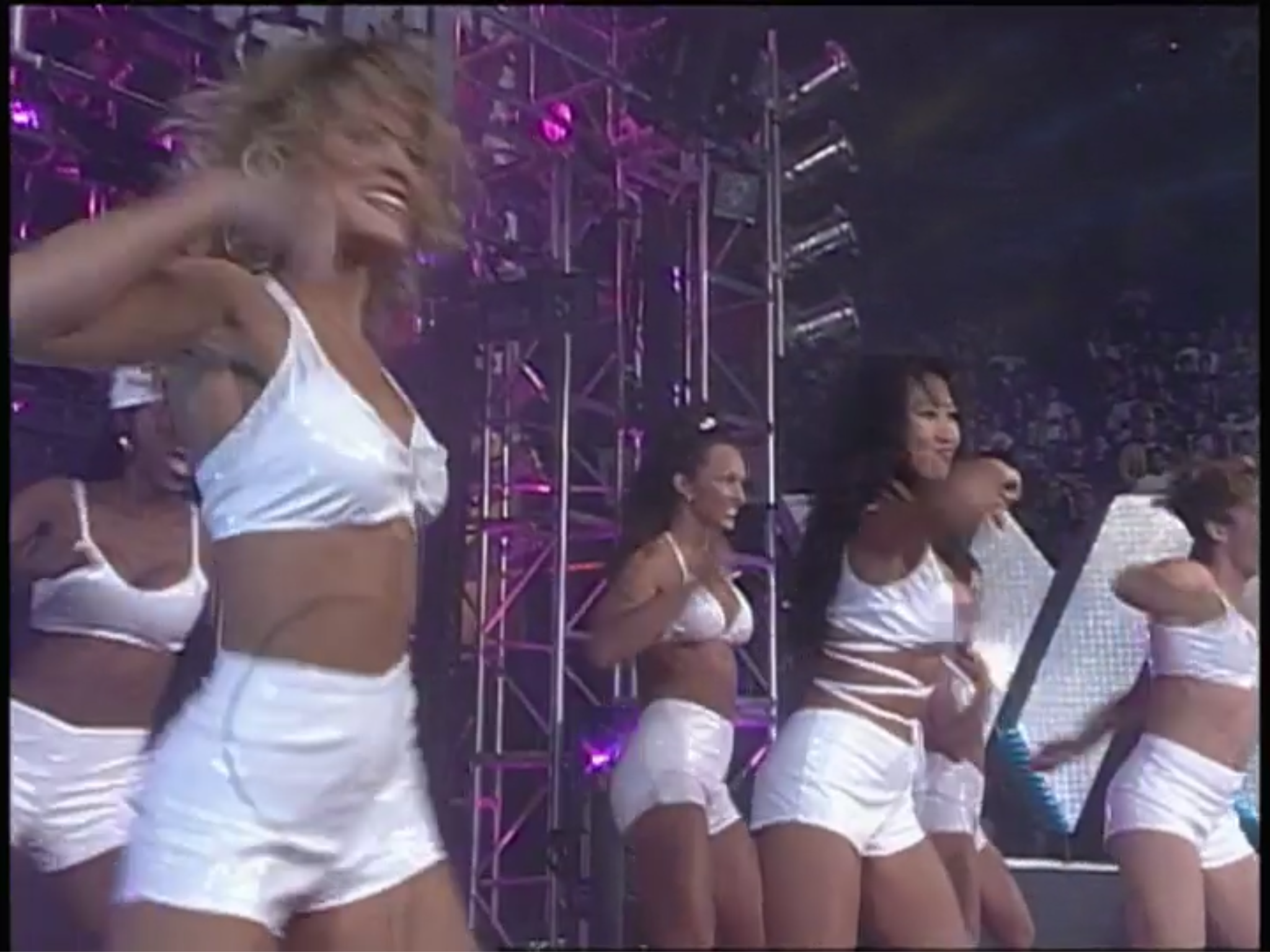 Eric Bischoff and Hollywood Hogan emerge through the entrance and head to the ring. After he cuts a promo on Sting, Hogan turns his attention to Piper.

Summary: Good opener that put an exclamation point on the Jarrett-Mongo feud. This match marked Jarrett's last match in WCW until 1999. 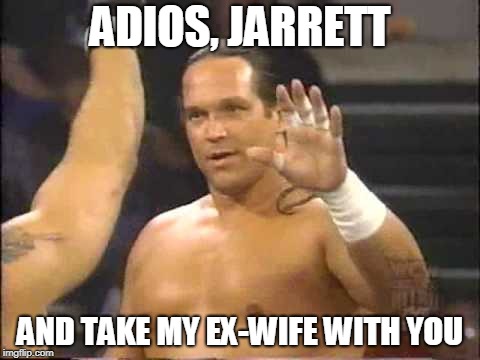 Zbyszko then shills Ben-Gay while the Minneapolis faithful chants "Lar-ry." 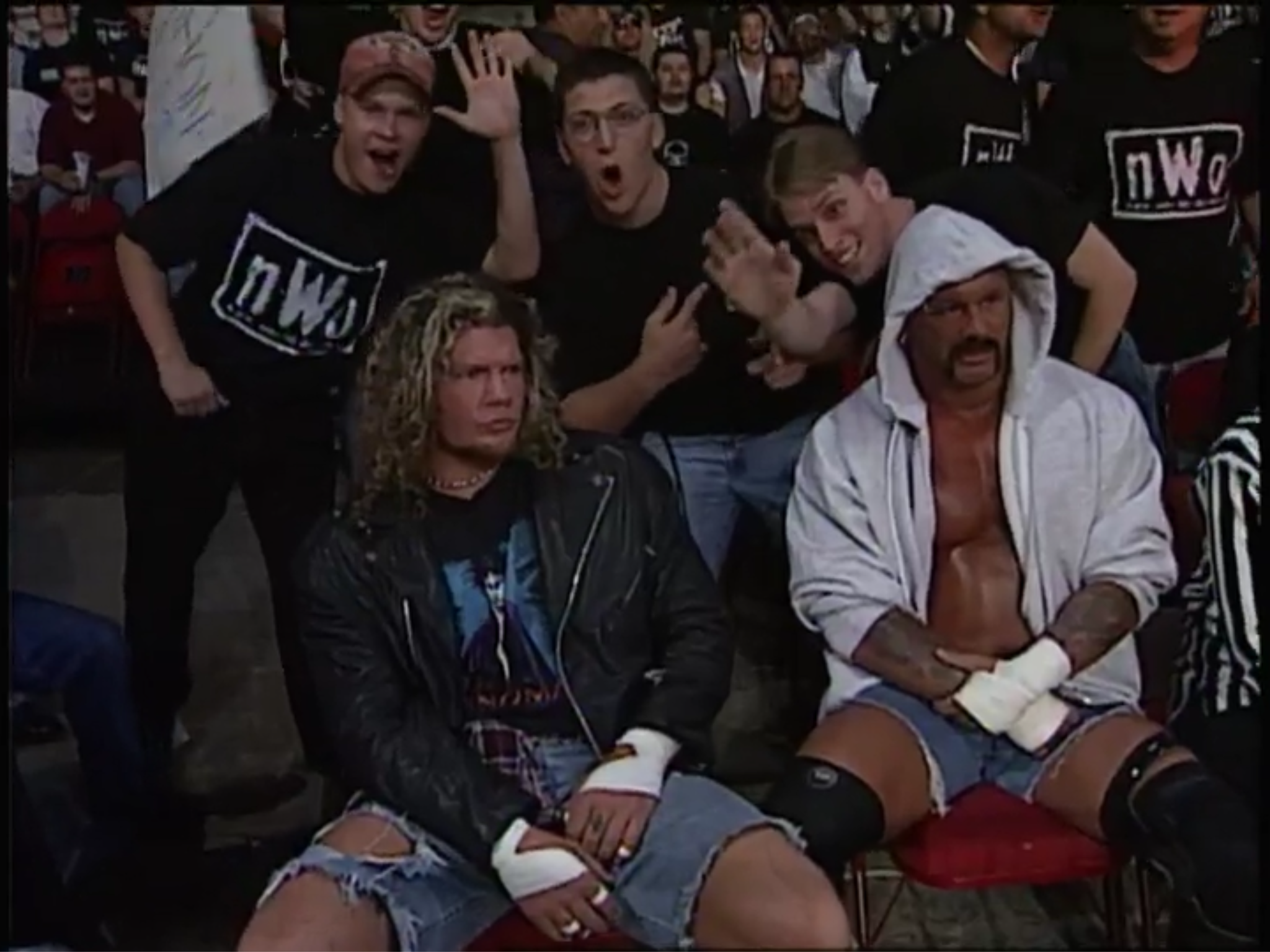 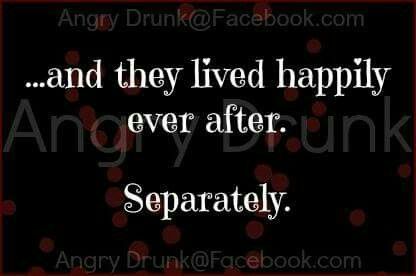 Summary: Kidman took a chance, but it didn't pay off. 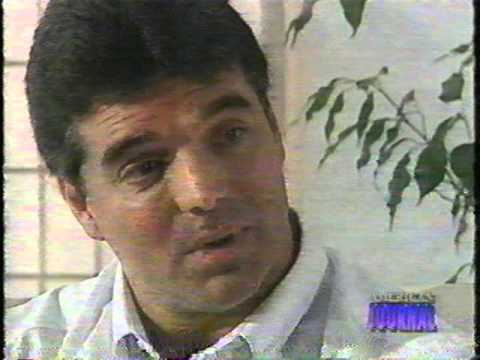 Summary: This had prelim match written all over it. Miller needs a lot more seasoning while Mortis requires more training as a ring general. Seasoned popcorn, anyone? 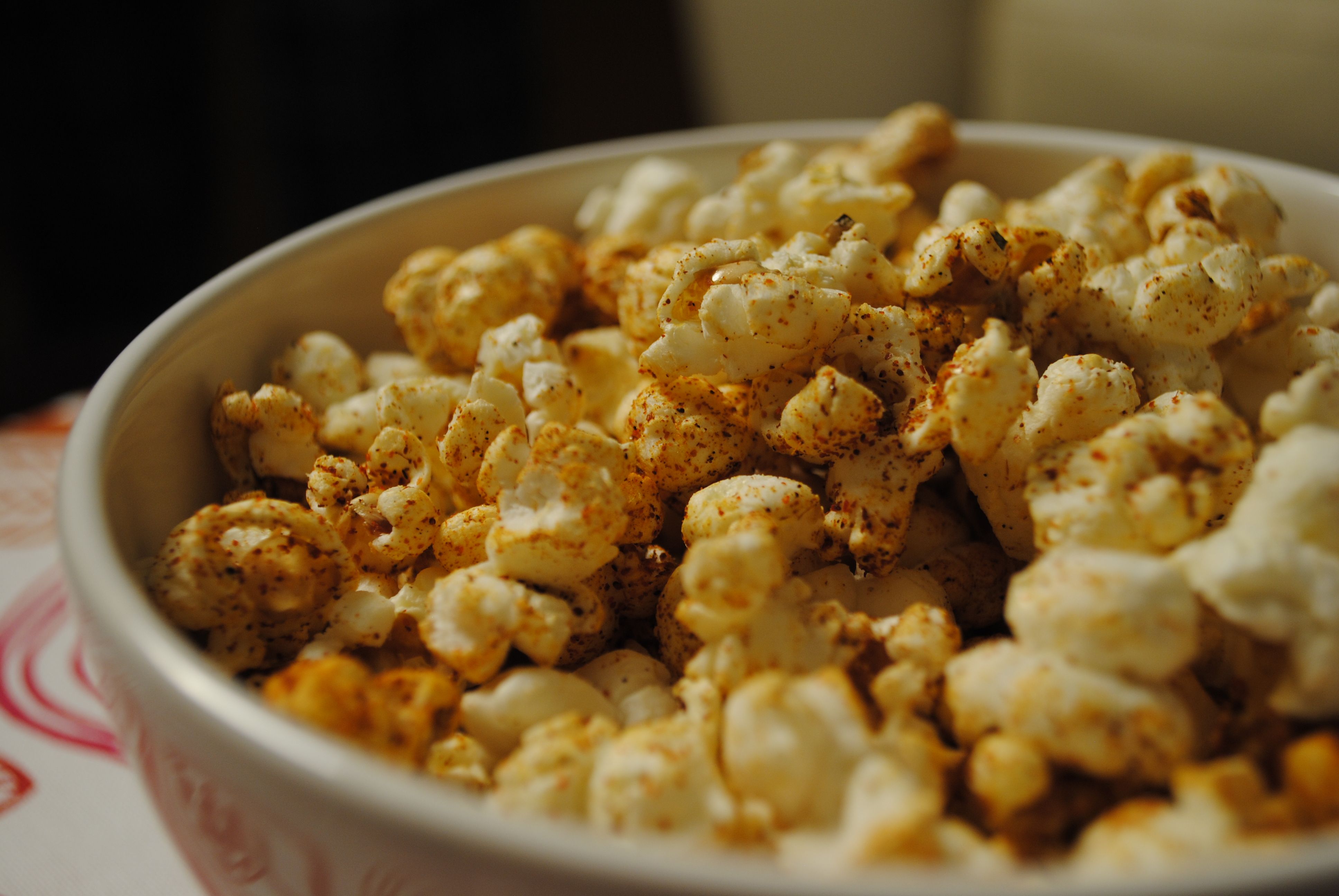 We then revisit Nitro from two weeks ago when Garza upset Hall.

Prior to the next match, Hall conducts a survey. Unfortunately, Minneapolis is nWo country. Hall explains that Kevin Nash is injured and mentions his own "injury." Next, he besmirches Zbyszko and gives Luger a crotch chop.

After the match, Hall dispatches Garza outside the ring. When Silverman raises Hall's hand in victory, Syxx provides Silverman with an enziguri. Nefarious! Hall then puts Silverman in the Torture Rack, drops him like a rag doll, and spray-paints "Z" on his back. I believe he's more concerned about Zbyszko's refereeing than wrestling Luger.

Nitro Girls dance at the entrance in black and silver.

Summary: Not bad for a four-minute match where Disco ALMOST lost the title.

After the match, Savage tosses DDP over the top rope to the floor. He then rams DDP shoulder-first into the steps. As he exposes the concrete floor, Savage attempts a piledriver, but "Rowdy" Roddy Piper arrives to prevent it from happening. Savage then shoves Piper but falls prey to a Diamond Cutter on the concrete floor. GET OUT THE SPATULA!

In the ring, "Mean" Gene Okerlund hypes his hometown crowd and interviews Piper. We then revisit Slamboree '97 when Piper manhandled Hall en route to victory. Piper then declares that the WCW World tag team titles will be defended next week, or he will strip Hall and Nash. At the PPV, he states that the Savage/DDP match will be a last man standing match.

Abruptly, Hogan and Bischoff enter the ring, and a stare-down ensues. Hogan denigrates Piper's role as Chairman and vows to "end his career." With Bischoff's assistance, Hogan beats up Piper and rips his shirt off. Hogan then grabs Piper from behind so that Bischoff could land a thrust kick. Regrettably for Hogan, Bischoff kicks him when Piper ducks. Upon pounding Bischoff, Piper scraps with Hogan on the mat until the nWo pulls Hogan out of the ring. He then holds them off while wildly swinging the World title belt.

Nitro Girls dance in the ring while wearing gray and white. During their performance, Schiavone announces that if Mongo defeats Jarrett at the PPV, Debra must leave WCW. Well, SOMEONE was leaving WCW.

Summary: Counter-wrestling occupied the bulk of the match as each wrestler couldn't outsmart the other; however, Eddie got the last laugh.

Prior to the main event, we revisit WCW Saturday Night when the nWo interfered in a match between Benoit and Hennig (aired 10/4, taped 10/1).

Match 7 for the WCW US title: Curt Hennig (champion) versus the “Crippler” Chris Benoit

Summary: Hot main event where Hennig won in his hometown.

After the match, Hennig CREAMS Benoit with the title belt, and the nWo hits the ring. All of a sudden, "Nature Boy" Ric Flair storms the ring, clears the nWo from it, and chases Hennig out of the Target Center. He then returns through the entrance to be interviewed by Okerlund.

Since Flair was in his old stomping grounds, he took the microphone to the ring. He then cuts a promo on Hennig and wants to face him at the PPV. Following his plan to destroy Hennig, Flair plots to topple Hogan. 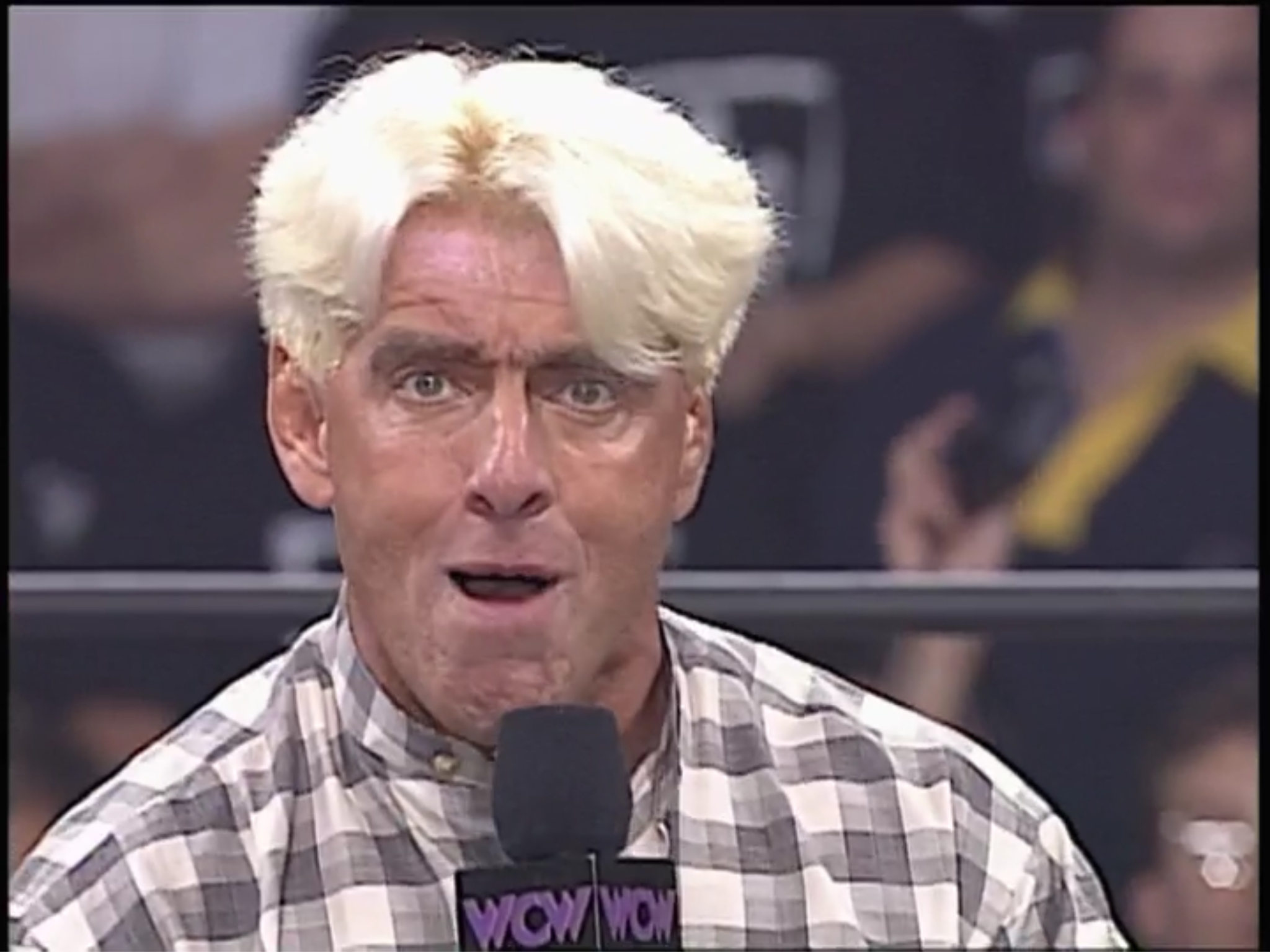 Conclusion: Great finish to a memorable show.My hat goes off to Hennig for that Pillman bump. While storylines for the PPV progressed, next week’s show features a World tag team title match. Since Nash is injured, how will it play out? What’s on RAW is WAR?