Will Austin be fired? Who will Undertaker face in the main event? How will Michaels be involved? And what’s going on with Owen this week? Let’s find out!

In the ring, Vince interviews Michaels who stands alongside Hunter Hearst Helmsley, “Ravishing” Rick Rude, and Chyna. Rude tries to sell Vince a policy while Michaels crows about the 4-on-1 ambush of the Undertaker last week. Helmsley then mentions “cliques” and cuts a promo on Undertaker. Both Helmsley and Michaels act sophomorically much to Vince’s chagrin.

Suddenly, Commissioner Slaughter comes to the ring and talks directly to Michaels. To mock Slaughter, Michaels pantomimes protecting himself from spittle. Slaughter then declares that Helmsley will face Undertaker TONIGHT while Helmsley throws a hissy. 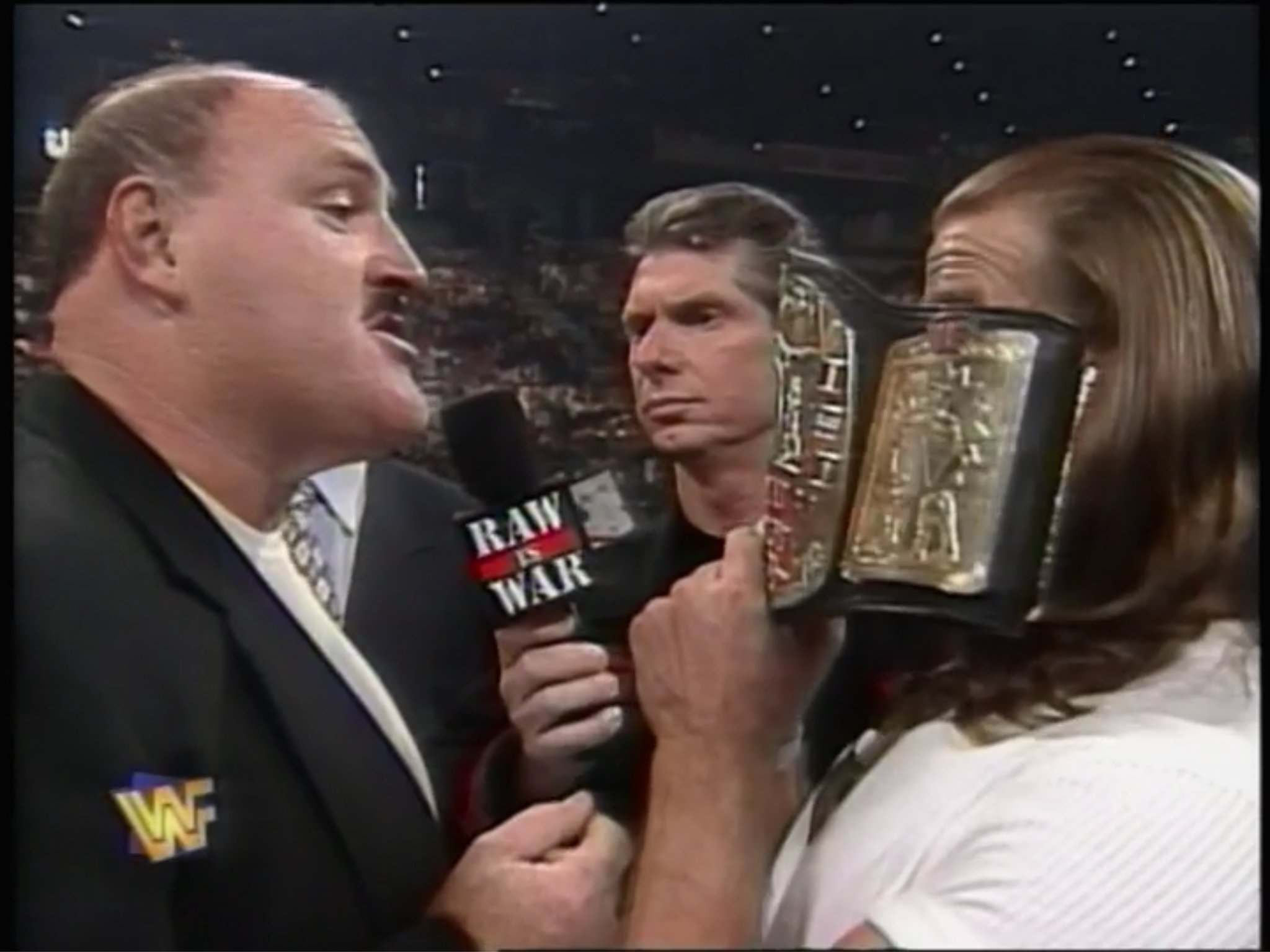 Bret and the Hart Foundation emerge, and Bret warns that Helmsley and Michaels will pay for their crimes TONIGHT. The sophomoric duo then pantomimes disbelief and fear.

Attempt #2 at Survivor Series super supper sweepstakes is coming to a gag reel near you.

We then revisit video and stills of One Night Only.

Summary: Forget the nachos and the cheese sticks. This was your appetizer for the PPV this Sunday.

In Your House XVIII: Badd Blood is sponsored by Sony Playstation.

Summary: More of a backdrop for the six-man tag match at the PPV than anything else.

After the match, an eight-way brawl erupts in the ring until the babyfaces clear the ring.

Promo for IYH XVIII: Badd Blood airs. It will be LIVE on PPV this Sunday. Have you ordered it yet? 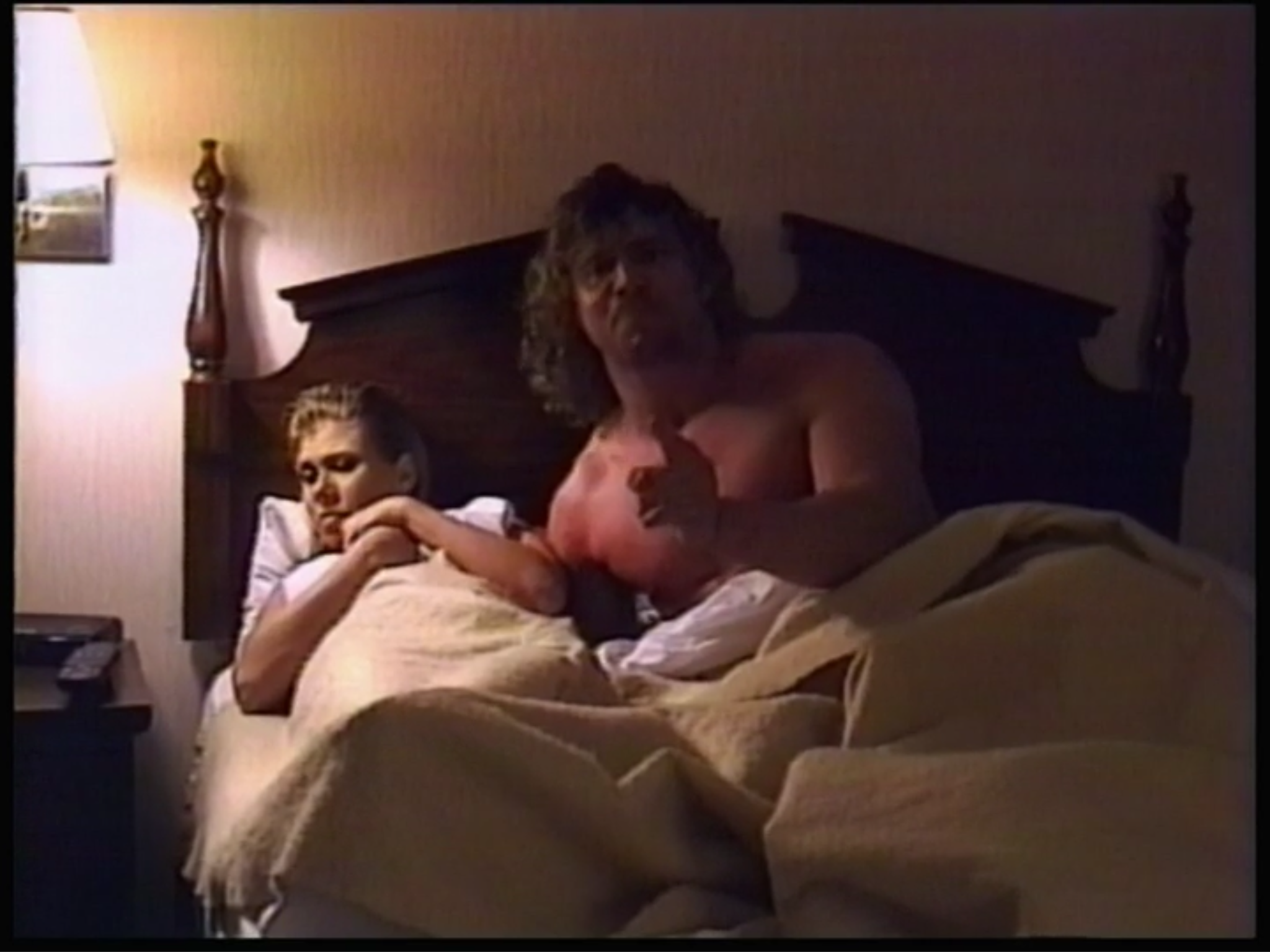 Match 3: Goldust (w/o Marlena) versus the Sultan (w/ the Iron Sheik) 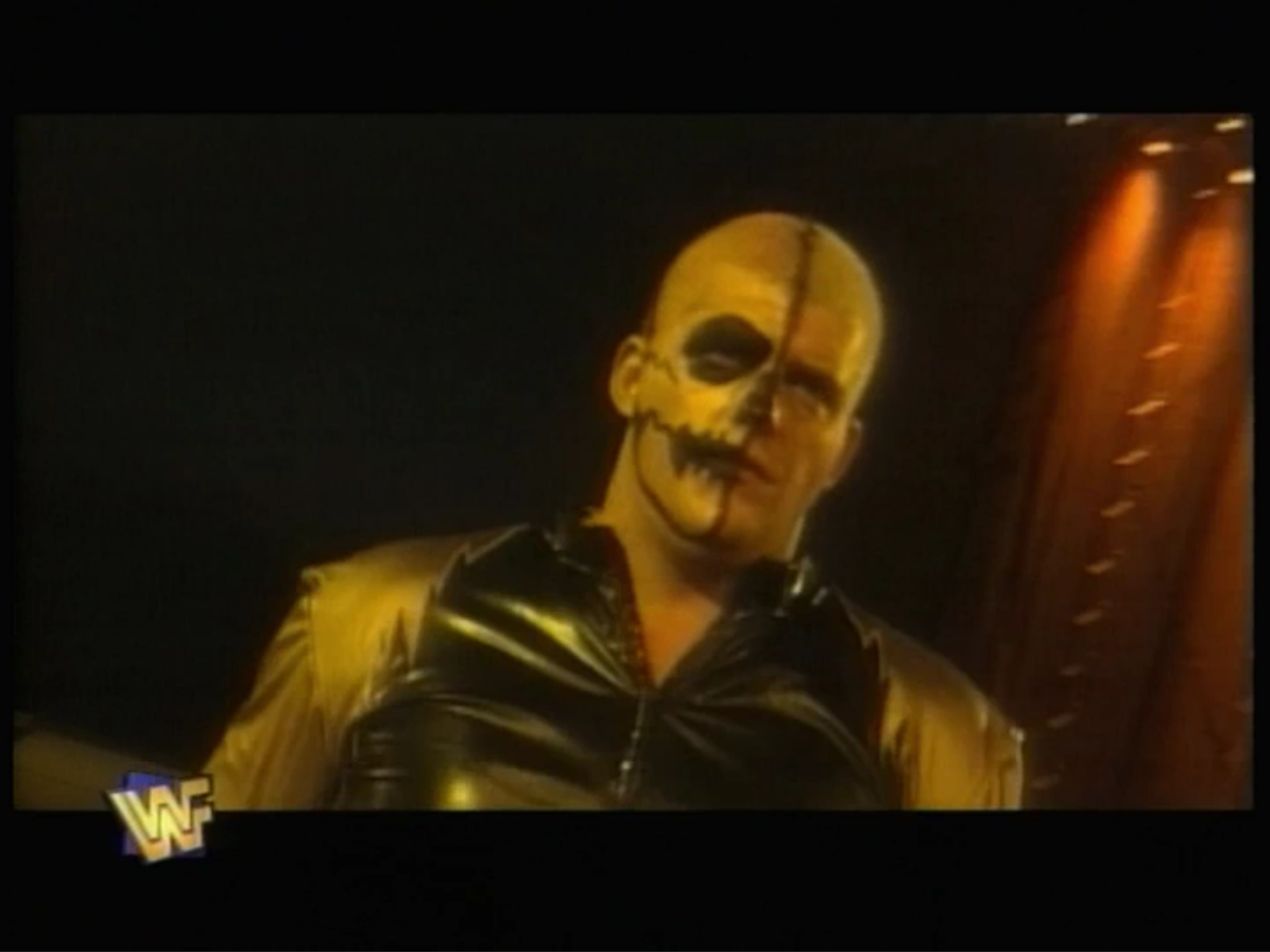 Summary: Finish came out of nowhere, and most of the Albany faithful went on the hunt for popcorn.

THIS JUST IN: Stone Cold Steve Austin has arrived in Albany! Wait a minute! Last week, he assaulted his boss and this week he shows up late? If that were me, at the very least I’d be fired if not jailed.

Austin emerges and calls Vince into the ring. When Vince is handed the microphone, he gives Austin three options:

Austin responds to each option like only he can. As Vince returns to the broadcast table, Austin flips him off much to the delight of the Albany faithful.

Ross then shills upcoming live shows for the WWF:

WAR ZONE is sponsored by Castrol and Starburst.

Match 4 for the WWF tag team titles: The Headbangers (champions) versus Los Boricuas

Summary: Complete waste of time with a bogus finish. Yuck!

Promo #2 for the Hell in a Cell match at the PPV this Sunday. Who’s making a feast for the show?

With new music and a new t-shirt, Owen came to the ring with officers in riot gear. We then revisit Summerslam ‘97 when Owen mistakenly injured Austin severely with a tombstone. Vince then interviews Owen who cuts a promo on Faarooq in anticipation of the tournament final at the PPV. Owen then wants Austin out of the WWF and especially out of his hair. After one of the members of the riot squad removes his helmet, Austin reveals himself and gives Owen the Stone Cold Stunner. 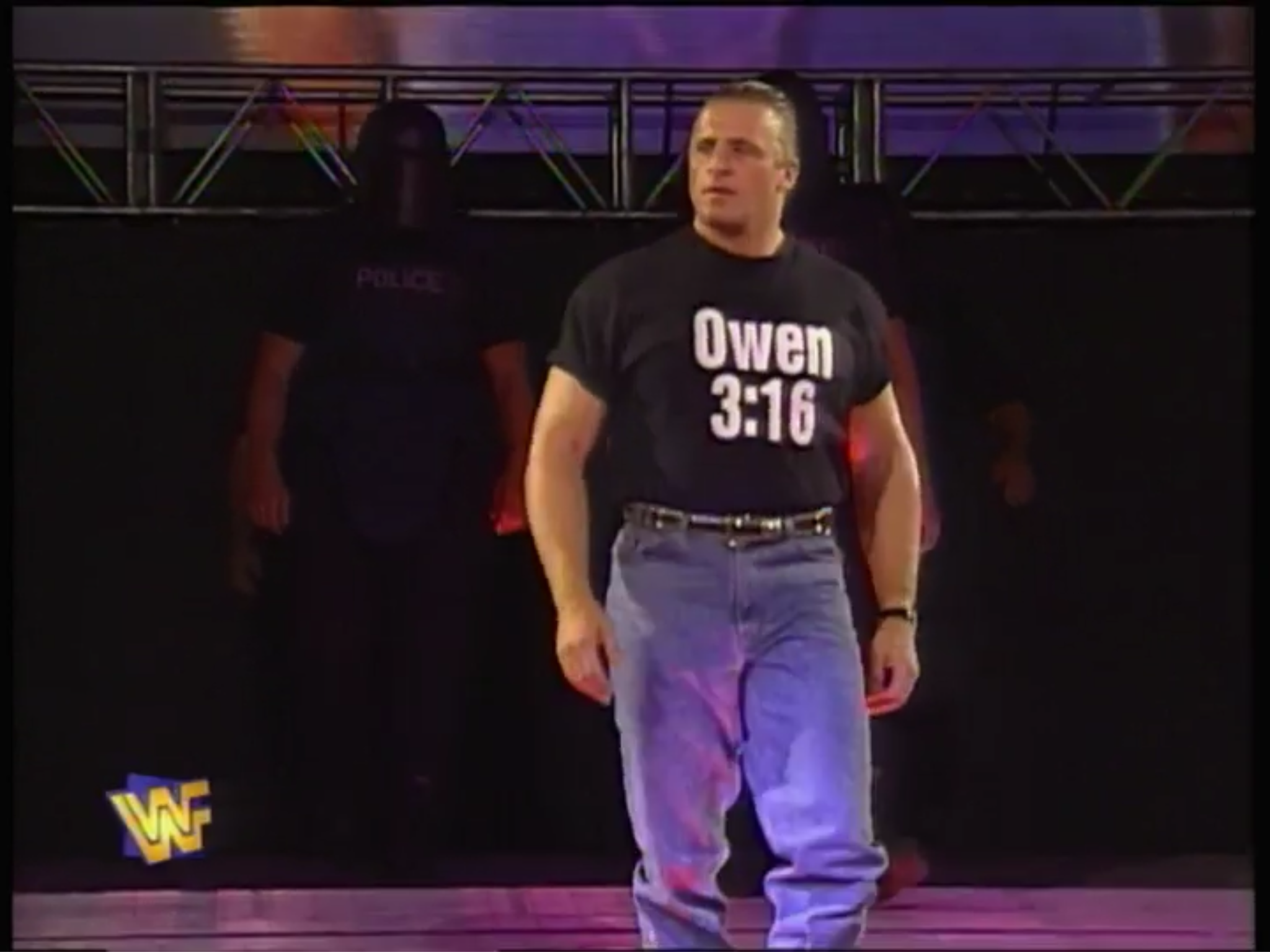 Promo #2 for the One Night Only video airs.

Back in the locker room, Jim “The Anvil” Neidhart oversees a recuperating Owen.

Vince then shills the Hell in a Cell match at the PPV including the construction of the cage.

After the match, Rude removes a body bag from the Haliburton. Michaels then unleashes Sweet Chin Music to Undertaker with assistance from Helmsley and Chyna. Upon placing Undertaker in the body bag, Michaels, Helmsley, and Chyna revel in their destruction. That was until Undertaker sits up and escapes from the body bag. He then saunters after MIchaels.

Before Michaels made his way backstage, he’s floored by a mysterious red light. As Undertaker tombstones Helmsley on the metal stage, Michaels hightails it by climbing the Titantron. 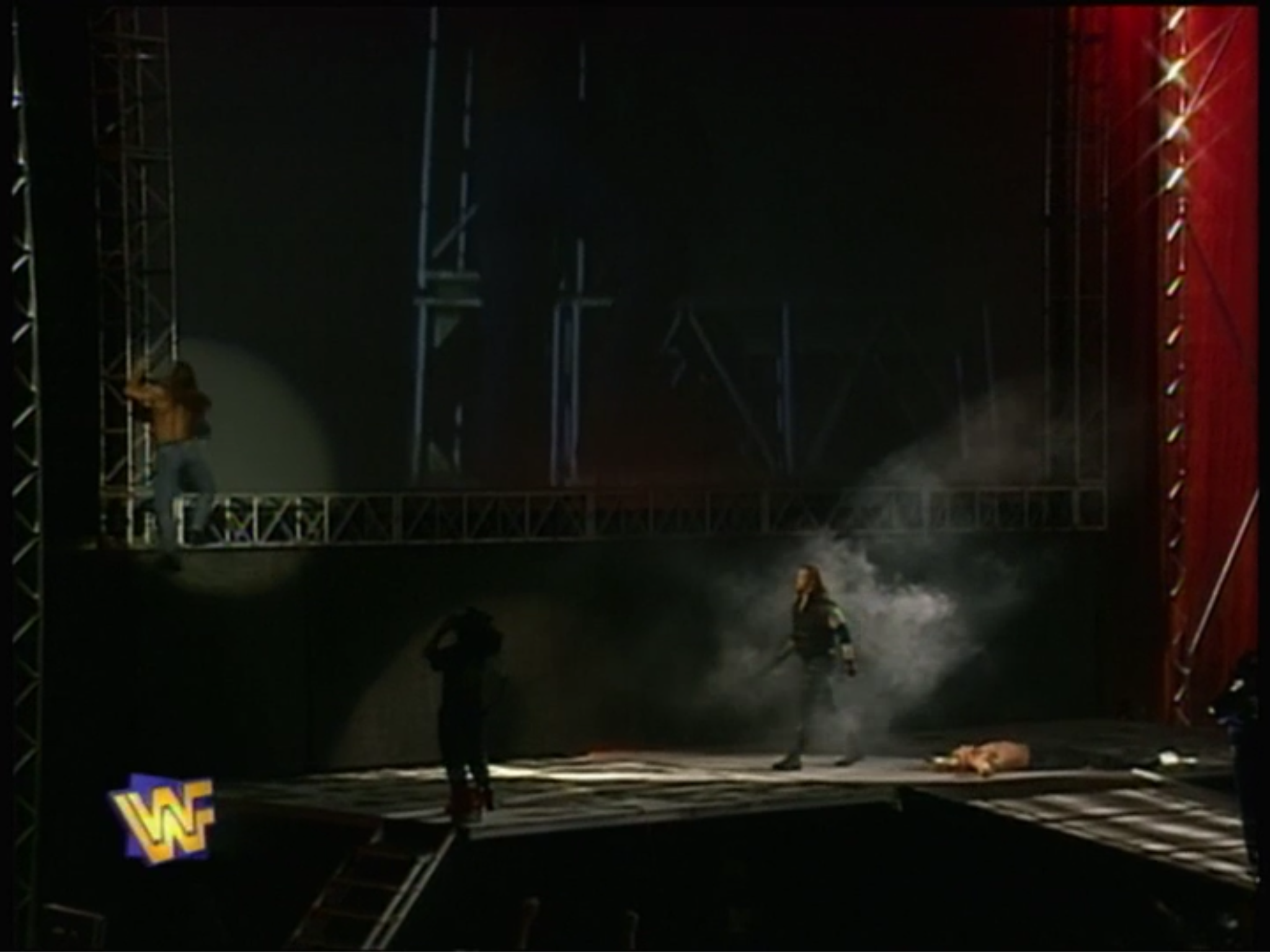 Conclusion: Pay-per-view! Get your hot, fresh PPV here! Pay-per-view! Yes, the WWF goes full-bore plugging the PPV this Sunday with this episode. While the wrestling stinks on Melba toast, the angles surrounding them are exciting for the most part. Austin’s continued rampage remains to be the most entertaining portion of the program, but Michaels and Helmsley’s hijinks must lead to something, right?

Speaking of leading to something, was this episode able to derail the runaway train of Nitro?

Who won? Nope, RAW is WAR still doesn’t have the firepower to overtake Nitro. Whie nothing is scheduled next week on Nitro, post-PPV fallout happens on RAW is WAR. Who’s ready?

Stay tuned for WWF In Your House XVIII: Badd Blood!