Taped from Muncie, IN

Can Smith and Bret capture tag team gold? Who will advance in the IC title tournament? What’s Austin up to? Will Michaels stir up trouble or play nice with Undertaker? Let’s find out!

Match 1 for the WWF Intercontinental title (quarterfinal): Faarooq (w/o the Nation of Domination) versus Ken Shamrock

After the match, Faarooq gives Shamrock a Dominator, and the rest of the NoD hits the ring to quadruple-team Shamrock. Suddenly, the Road Warriors come to Shamrock’s rescue and chase away the NoD. According to Ross, the Road Warriors will face the NoD at the IYH PPV.

Backstage, Austin stands next to a forklift. When Lawler informs him about Owen’s “big surprise,” Austin mentions that Owen’s due for a receipt. 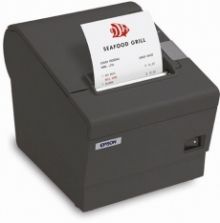 Backstage, the Truth Commission cuts a promo on the Road Warriors.

Prior to the next match, we revisit Shotgun Saturday Night when Shamrock rescued the Road Warriors from the NoD.

Match 3: The Truth Commission (w/ the Interrogator & the Commandant) versus the Road Warriors

Summary: If you’re wondering why the Truth Commission have made sparse appearances, their ring work provides the proof.

After the match, Animal clotheslines the Interrogator who doesn’t leave his feet. The Interrogator then gives Animal a big boot. As Shamrock comes to the Warriors’ rescue again, he gives Sniper a belly-to-belly suplex. Suddenly, the NoD hits the ring to pummel Shamrock and the Road Warriors. Officials then storm the ring to break up the melee.

Summary: Lucha spot-fest where the underdogs won again. Sady, there was no comedy displayed in the match, and it lost the crowd at times. 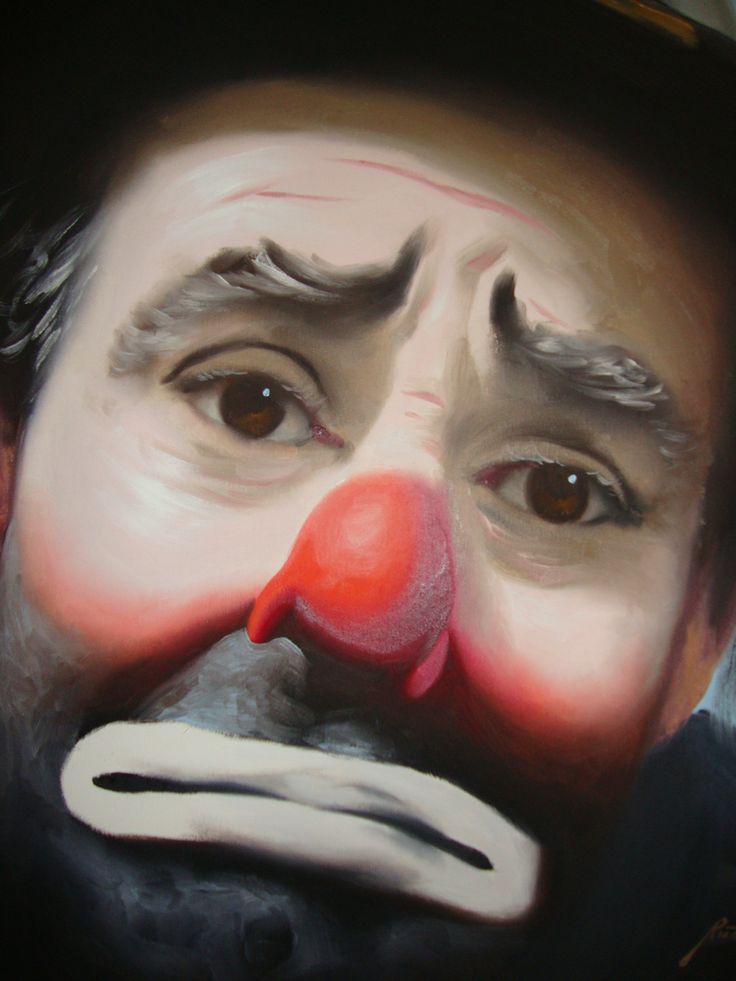 After the match, Sunny dances with Lawler.

Get WWF trading cards with purchase of Stri-dex. 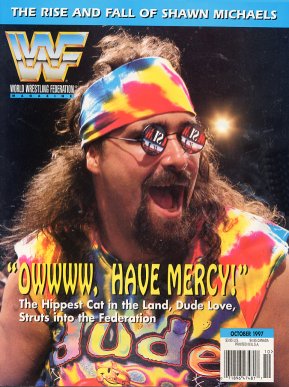 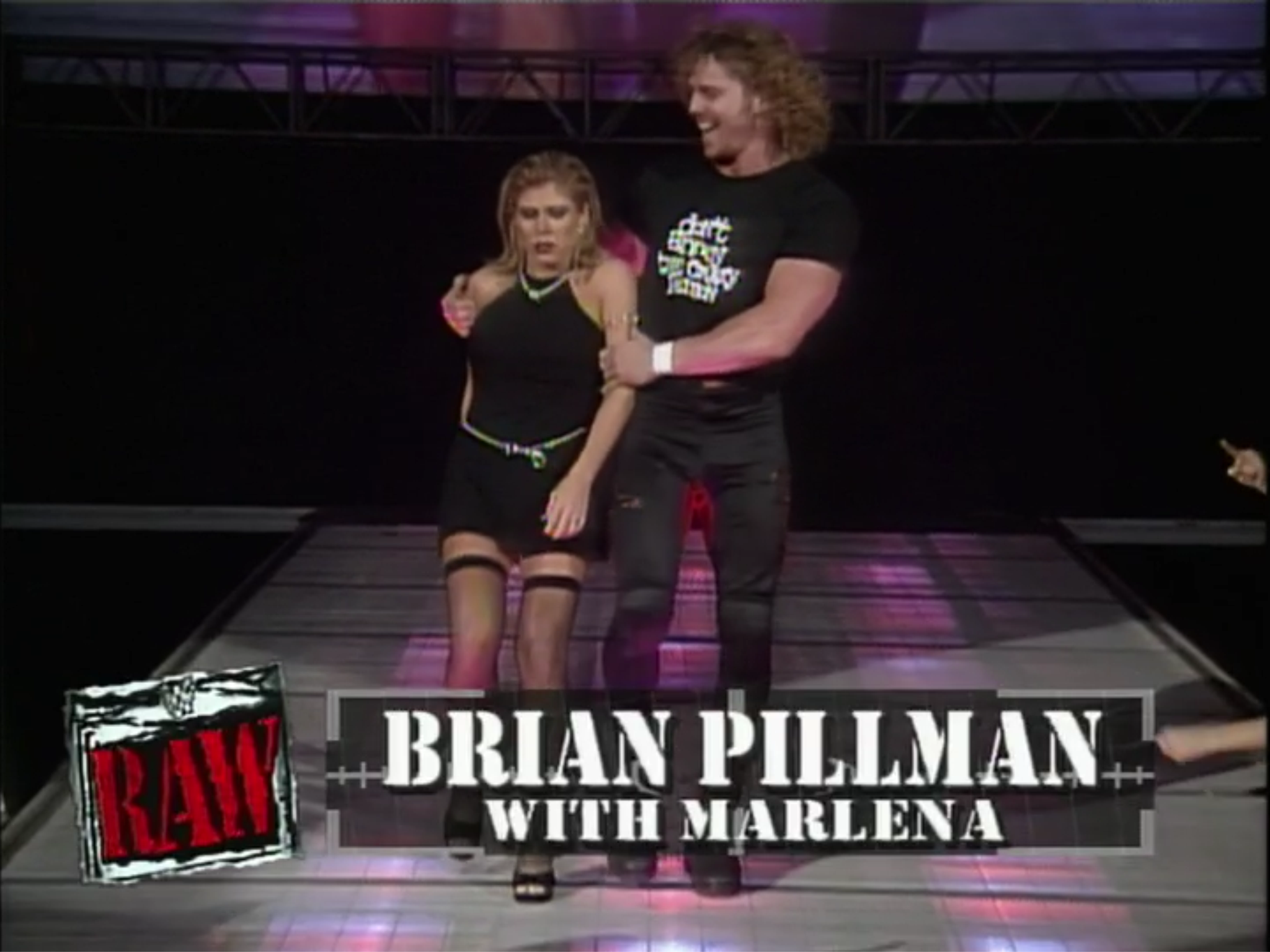 Summary: As you can tell from my description of the match, it had more storyline than substance.

After the match, Runnels pummels PIllman until the latter escapes with Marlena.

In the ring, Lawler interviews Stone Cold Steve Austin. We then revisit IYH XVII when Austin gave Ross the Stone Cold Stunner. Next, we revisit last week’s show when he delivered the Stunner to Commissioner Slaughter. Lawler then hints that Vince McMahon has a bull’s eye on him. After Austin runs down Ross, he states that no one can stop him.

Austin then cuts a promo on Owen, and the Hart Foundation emerges through the entrance. While Bret calls Austin a “hoser,” he reads Austin the riot act. Owen then details that Austin is being served with a restraining order. Following that, Austin reads the legal document and hits the Stunner on Lawler to a raucous ovation. To punctuate the segment, Austin punts Lawler’s crown out of the ring. HA! 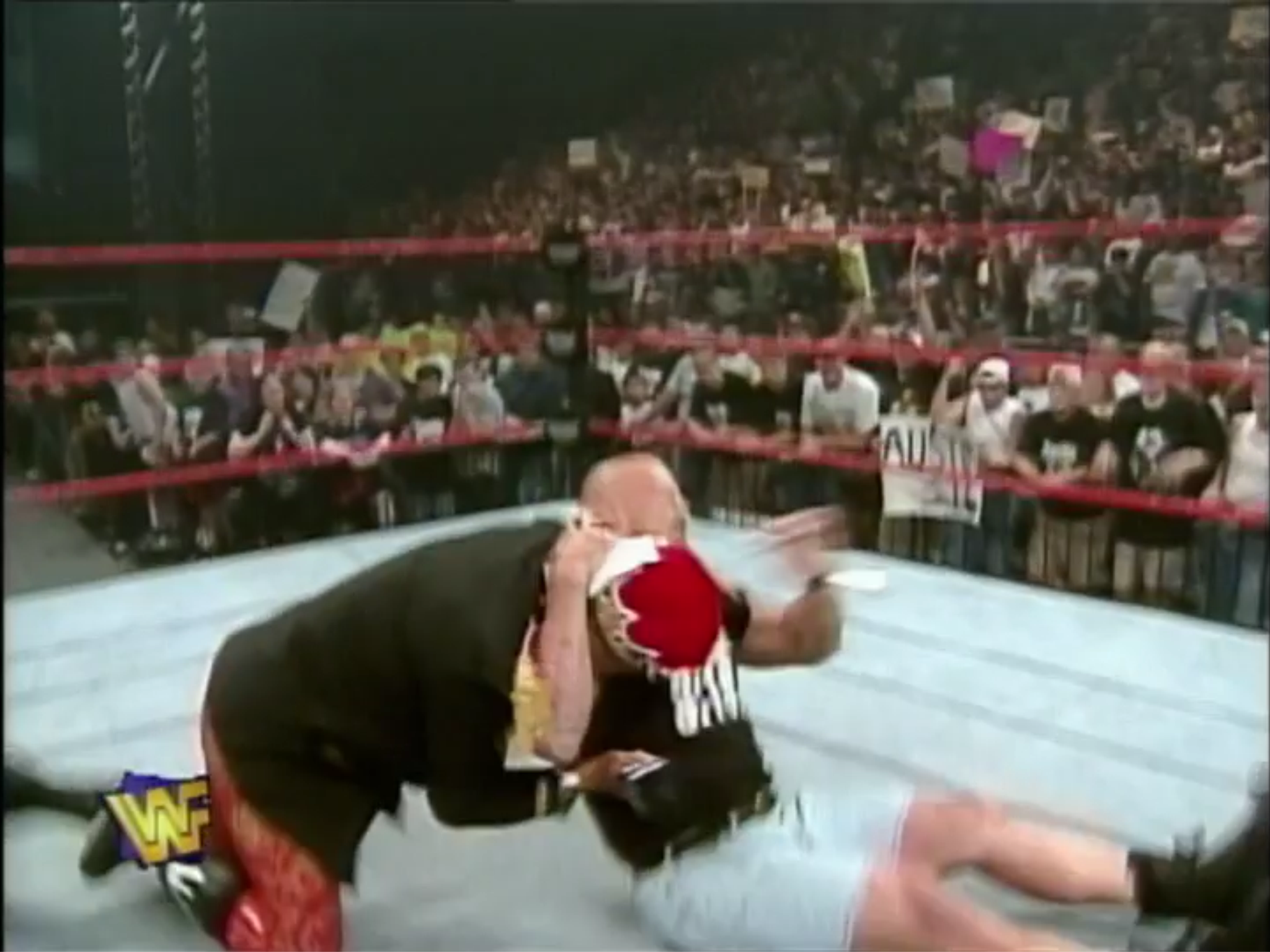 After a commercial break, Jim Cornette replaces Lawler at the broadcast table.

Summary: Good match where the storyline caused the finish much to the delight of the Muncie faithful.

After the match, Owen grabs the microphone and wants Austin arrested. Austin then leaves through the Muncie faithful much to the chagrin of Muncie’s finest.

In the ring, Ross interviews the “Heartbreak Kid” Shawn Michaels. Oh. My. God. Michaels is wearing skin-tight bicycle shorts with some extra stuffing down the front of them. We then revisit last week’s episode when Michaels and Hunter Hearst Helmsley attacked Smith. Following that, Michaels states he wants to be the first wrestler to win all four titles in the WWF. 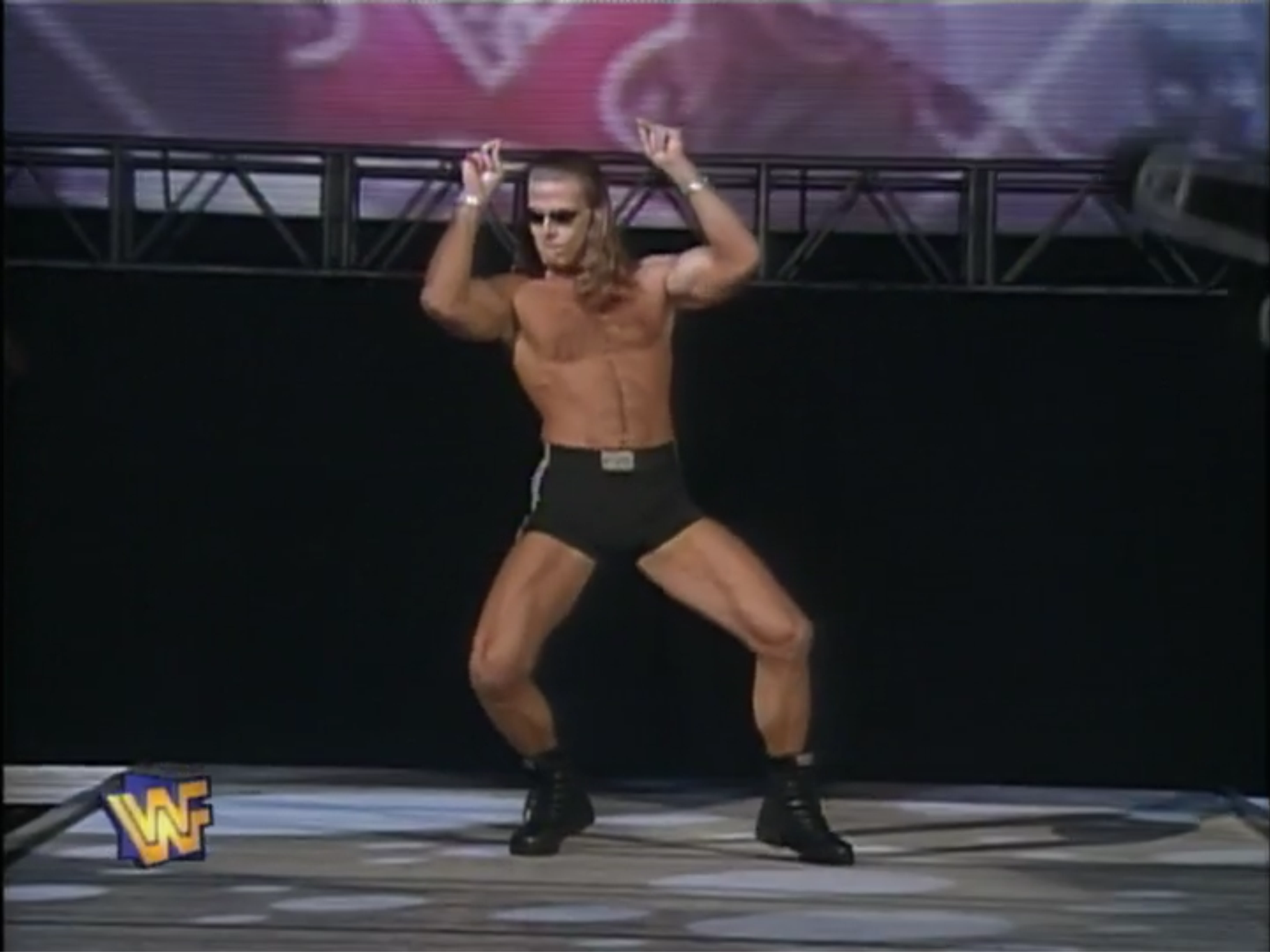 After a quick edit, Michaels shills the upcoming Hell in a Cell match at the PPV. When Undertaker appears on the Titantron behind a fence, he promises to “leave with (Michael’s) soul.” After a subsequent edit, Michaels vows to make Undertaker bleed again.

According to Meltzer, Michaels gave a profanity-laced soliloquy and called out Undertaker despite his not being in Muncie. Michaels’ attitude has him in hot water with the WWF, and his motives are unclear. We’ll see what happens. My belief is that Michaels was heavily medicated albeit not under doctor’s orders.

Cornette then shills the WWF hotline.

Prior to the main event, a video featuring Headbanger Mosh versus the Philly Phanatic at Veteran’s Coliseum this past Saturday. Is it me or were the Headbangers better suited for south Philly rather than the WWF? 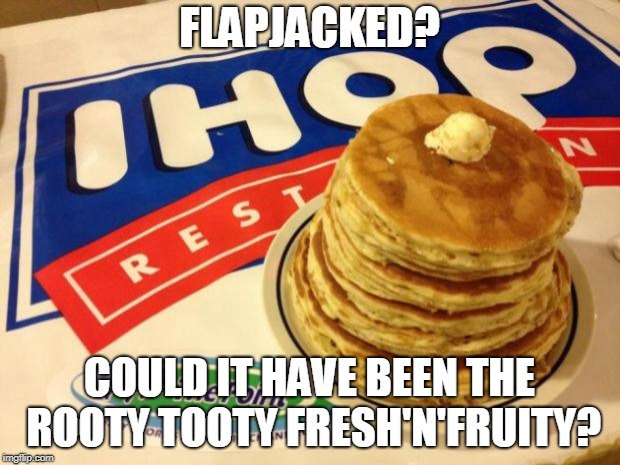 Summary: Perhaps Bret didn’t see anything in the Headbangers because he and Smith performed way below reasonable expectations against them. In fact, they may have significantly dimmed the Headbangers’ star.

After the match, Bret and Smith continue to maul the tag champs until Vader and Patriot come to the Headbangers’ rescue. Vader then gives Bret a running body block while Patriot slams Smith.

Conclusion: This episode is noteworthy for two things:

The rest of the program should be avoided at all costs as this taped show was a failure of biblical proportions. How did it fare against Nitro?

Who won? Not well, but not as poorly as last week. Instead of losing by two ratings points, RAW is WAR lost by 1.3. Next week, Nitro debuts at the “new” arena in Salt Lake City, and I hear there’s debuting a new character. Otherwise, on RAW is WAR, the show emanates for the very first time at MSG, so something spectacular had better happen or the WWF’s goose is cooked. 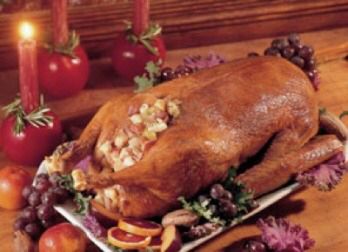 Stay tuned for WWF One Night Only!