Will Faarooq become the first African-American WWF champion? What will be the outcome when tag team champions collide? Who will wear the crown this year? 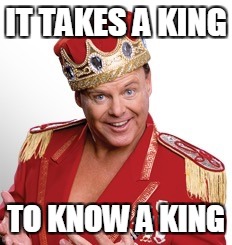 For those that care, the Headbangers defeated Bart Gunn and Jesse James during the Free for All. 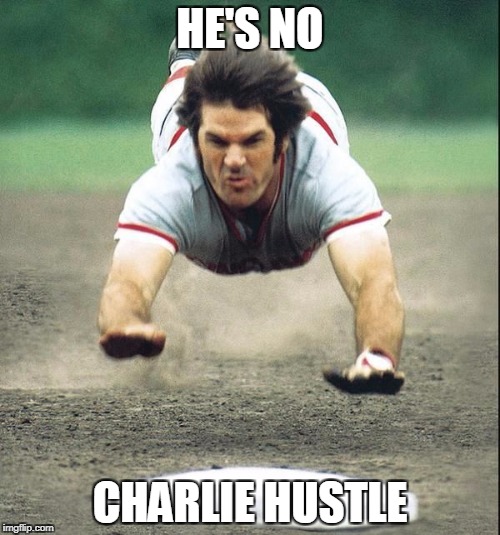 Summary: You've got to be kidding me. They put this jabronie over meal ticket Johnson? Perhaps Johnson's stock isn't as high as it once was. Why would you put Johnson's face on the poster and job him in the opening match?

Prior to the next match, we revisit last week's RAW is WAR when Mankind yanked Lawler from the broadcast table. To a babyface reaction, Mankind asks "where oh where has my Uncle Paul gone?" He then uses king metaphors and a "bang, bang" to help maintain that response.

Backstage, Todd Pettengill interviews Lawler as we revisit Lawler's path to the semifinals. Lawler then steals the microphone and insults the audience on his way to the ring. 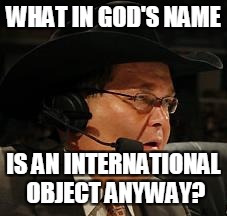 Summary: It's 1997. Did you really think Lawler would advance? On the other hand, Lawler did a good job of putting Mankind over.

Backstage, Pettengill interviews Pillman who cuts a promo on Austin. Speaking of Austin, he sneaks up behind Pillman, rams him into a folding gate, and gives him a swirlie in the bathroom stall. 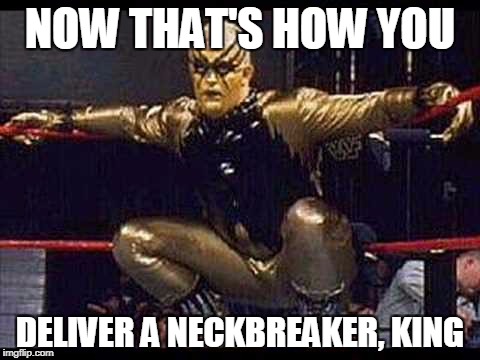 Summary: The shoot interview has helped Goldust achieve a modest babyface response, and his babyface comebacks made this match watchable. Crush's psychology helped the rating too.

Back in the locker room, Dok Hendrix interviews the Road Warriors and Sid.

Summary: Nifty six-man tag with a finish that kept the Hart Foundation strong. I mentioned stocks in the opening match, and Sid's has PLUMMETED!

Next, we revisit King of the Ring '96 when Austin gave his famous speech.

Afterward, Pettengill interviews Mankind backstage who cuts a promo on Helmsley and finishes with "have a nice day."

Summary: Oh. My. Lord. I cannot believe the WWF gave this ham'n'egger the King of the Ring accolade. He has midcard charisma, midcard talent, and needs Chyna to generate heat. This is absolutely absurd!

After the match, Pettengill brings the King of the Ring garb into the ring only to be attacked by Chyna. With Mankind still almost lifeless on the mat, a timid Pettengill gives Helmsley the royal robe and crown. Helmsley then uses the crown as a weapon and nails Mankind repeatedly. WWF politics, folks.

We then get an elongated retrospective on the pseudo-bond between Michaels and Austin created for the destruction of the Hart Foundation.

Speaking of the Hart Foundation, they come to the ring to be interviewed by Pettengill. Incredibly, Pillman has survived the swirlie to stand behind Bret. While Bret shills In Your House XVI: Canadian Stampede, he challenges "any five wrestlers" to face the Hart Foundation in his hometown.

We then revisit the swirlie from earlier in the show. What is this? RAW is WAR? C'mon Vince! It's not like there's another wrestling PPV opposite this show on another channel. 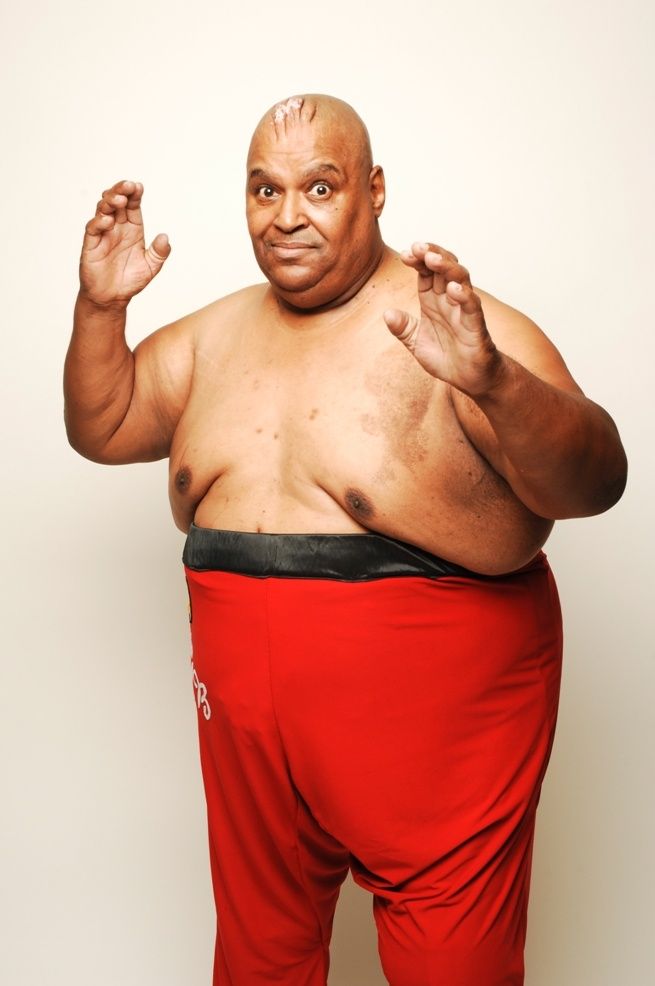 Summary: Exciting match with an extremely shitty finish. For crying out loud, Michaels, do a job for the next big thing. After all, this is PPV. 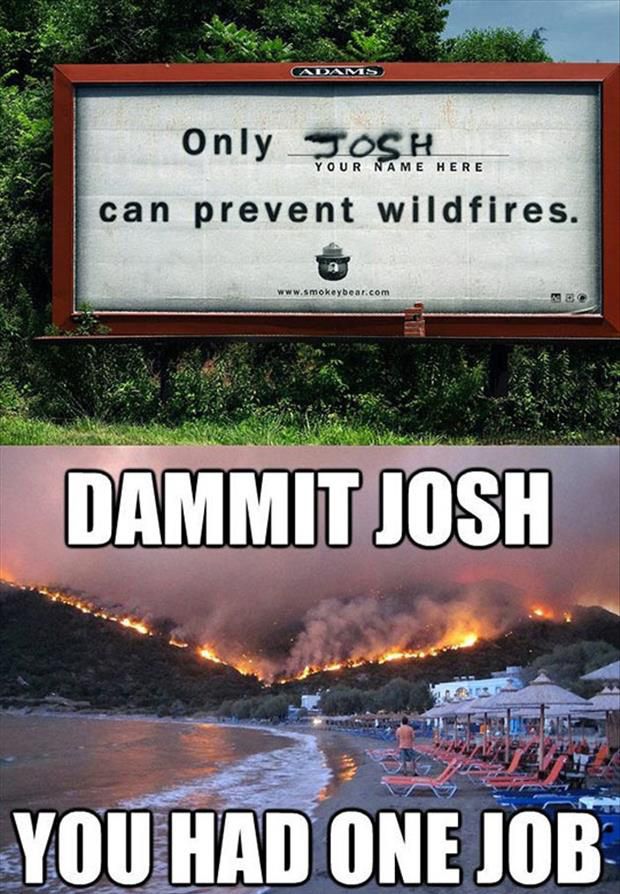 After the match, Austin retrieves the tag belts, mounts the second turnbuckle, but eats a right from Michaels. The champs then argue as they leave ringside.

Backstage, Pettengill interviews Faarooq with the NoD. We then revisit the aftermath of Undertaker's victory over Sid from last Monday. Following that, Faarooq declares tonight's match will be history. 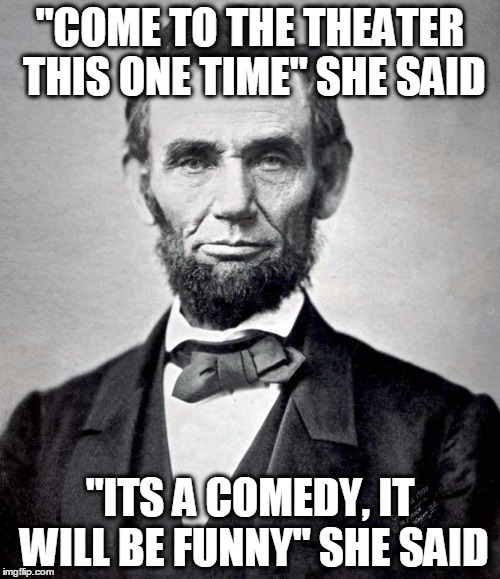 As the NoD makes its entrance, Hendrix interviews Undertaker with Bearer backstage. Bearer then calls Hendrix "Mr. Microphone" and exercises his control over Undertaker.

Summary: While the idea of a faction leader facing the WWF champion looks good on paper for a big 5 PPV, the execution fell flat here.

After the match, Vega enters the ring only to get chokeslammed by Undertaker. Crush then suffers the same fate. When Bearer berates him, Undertaker chokeslams Faarooq. Upon further threats, Undertaker delivers a second chokeslam. Next, Bearer continues his manipulation causing Undertaker to give Faarooq a third chokeslam.

Suddenly, Ahmed Johnson hits the ring and vehemently questions Undertaker's actions. When Undertaker tries to nail him, Johnson delivers the Pearl River Plunge. WE HAVE A HEEL TURN! Now I understand Johnson's presence on the poster.

Conclusion: Despite the crappy main event, the Michaels-Austin and six-man matches keep this show from circling the drain. While history scores this show as the "coming-out party" for Helmsley, it would take a lot more to take him to the next level.

If you've never seen the first encounter between Michaels and Austin, watch this show for that reason; otherwise, skip it.