Will Piper overtake Hogan in a steel cage? Will DDP make Savage snap into a Slim Jim? How will Mysterio fare against EVIL Eddie? Let’s find out! 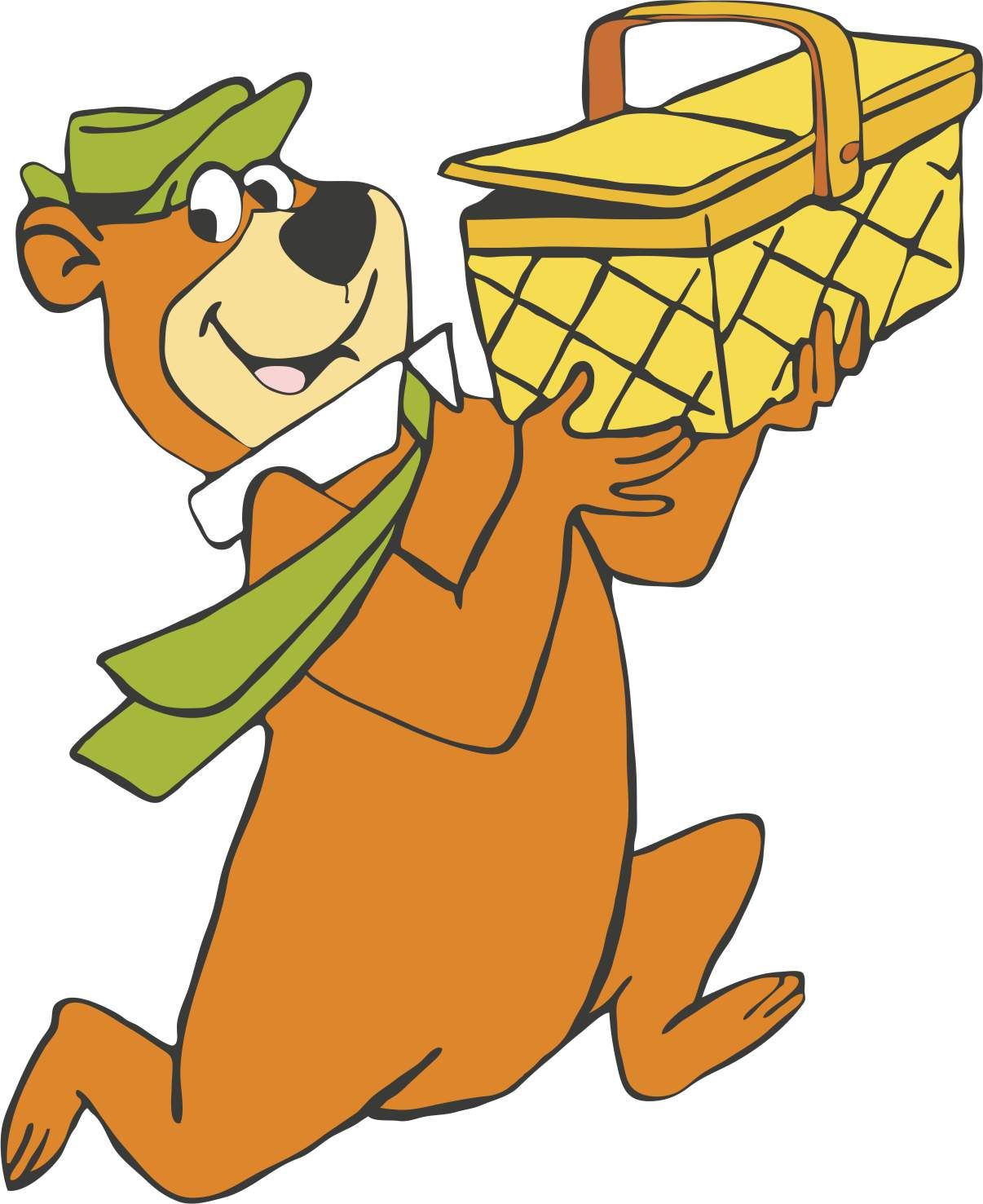 Summary: Solid opener, but the Vegas faithful were barely behind Dragon here. I believe some chicanery by Onoo would have helped them support Dragon.

After the match, Nagata holds Dragon’s arm so that Onoo could break it like a piece of wood. Onoo promptly pays Nagata for his services.

At the internet location, Mark Madden interviews Disco until Jacqueline interrupts him. She then chases him away. 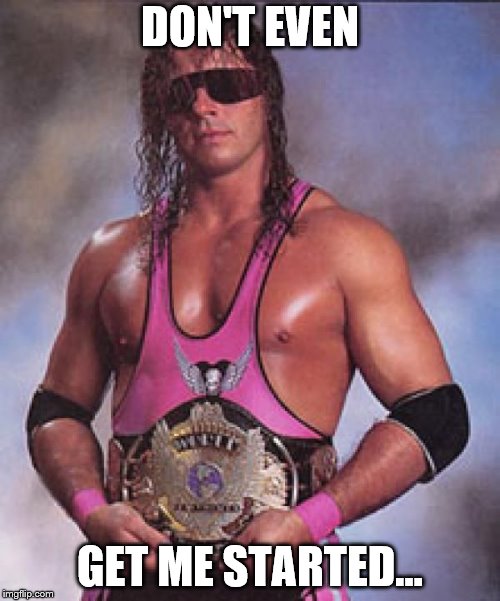 Summary: Although unseen in WCW prior to this match, the familiarity between the wrestlers was obvious with all the move-countermove strategy. Unfortunately, it took away from the match where high-flying and submission-style wrestling would have popped the crowd. 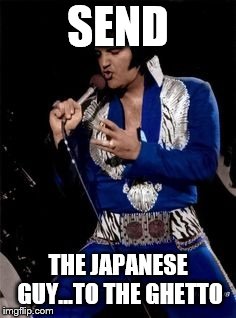 Back in the locker room, “Mean” Gene Okerlund interviews Debra who won’t reveal Mongo’s surprise opponent later in the show. Abruptly, Mongo interrupts his estranged wife, and they air their dirty laundry LIVE on PPV. 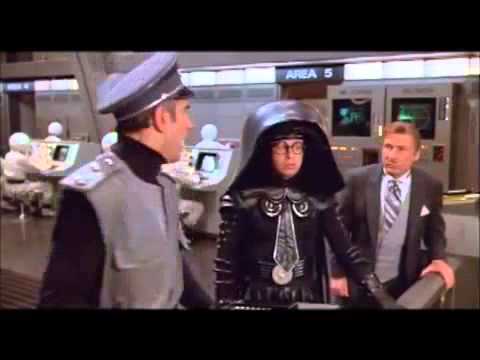 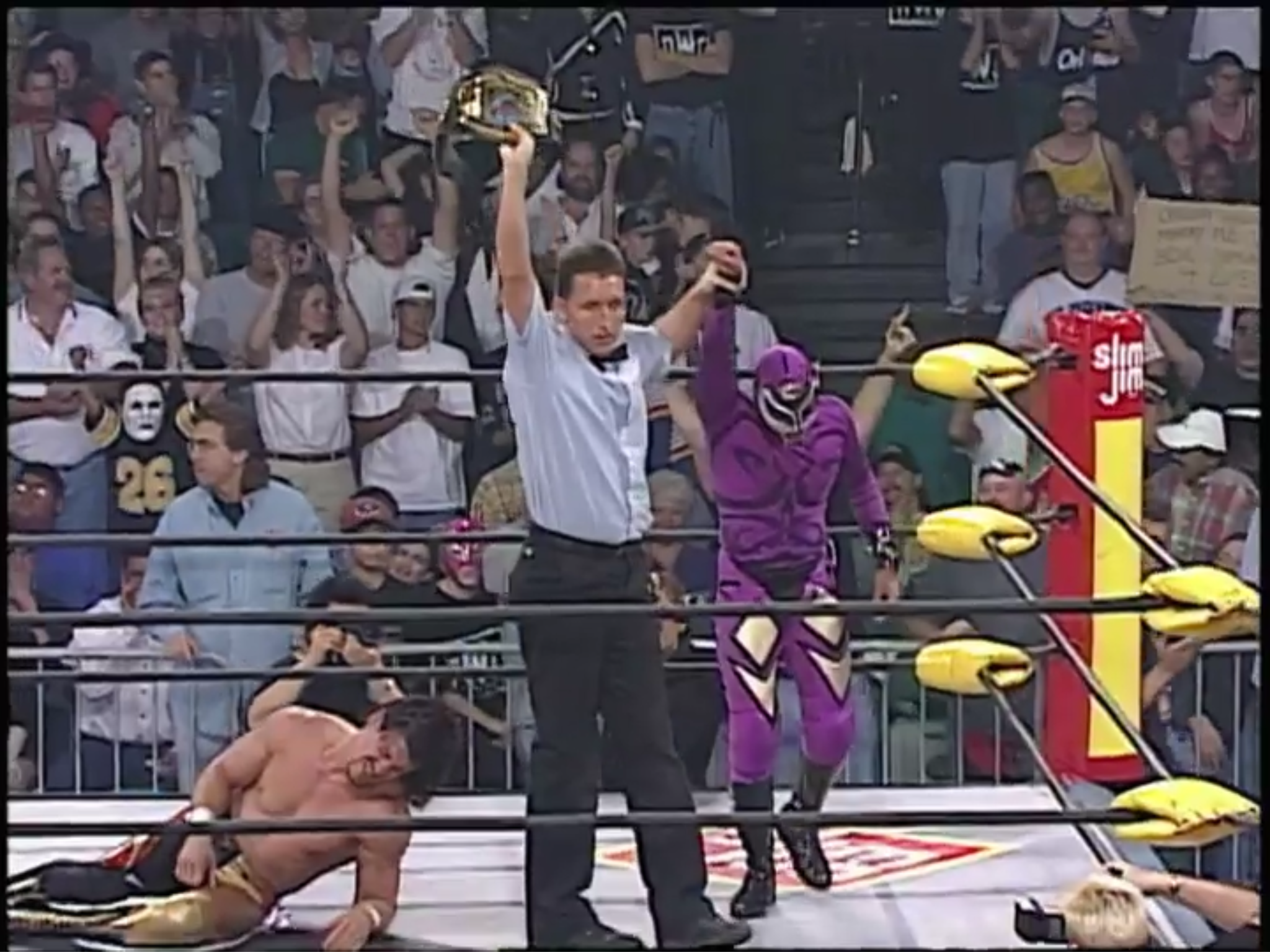 Summary: I realize that I’m not alone by scoring this match with *****. The energy, intensity, workrate, wrestling, and showmanship displayed in this match makes it one of, if not THE, match of the year. Check this out STAT.

After the match, Eddie attacks Mysterio and tosses him down to the floor.

Backstage, in the nWo locker room, Bischoff complains about the lack of a safe working environment in WCW. He then claims that Hogan won’t wrestle tonight unless Sting is prohibited from the arena. Afterward, Hogan cuts a promo on Piper. Televising the promo in black’n’white is a nice touch.

Summary: One can only stretch suspension of disbelief so far, and then there’s this match. YUCK!

After the match, Debra compensates Goldberg with Mongo’s Super Bowl ring for his mercenary work. Goldberg then responds with “it’s mine, baby, it’s mine.” As Wright approaches Goldberg to shake hands, he gets decked. Upon tossing Wright back into the ring, Goldberg spears him. He then delivers the Jackhammer to Wright while Mongo remains OUT COLD.

Summary: If the Vegas faithful hadn’t returned from their bathroom break during the last match, this fiasco would have sunk into negative stars too. 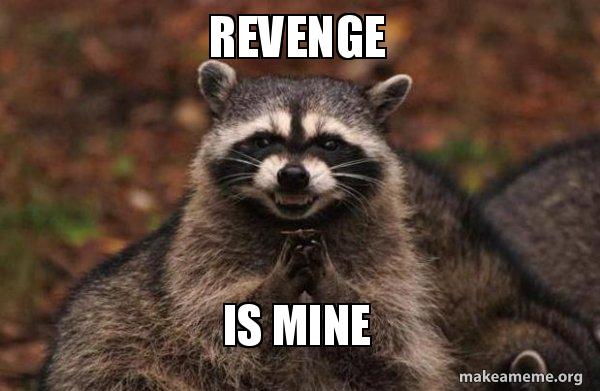 Summary: The finish alone earns a ½* from me as comeuppance from Flair. Way to go, Champ!

After the match, Flair knocks Silverman OUT COLD before rearranging Hennig’s face. Officials along with Konnan and Vincent storm the ring to save Hennig’s bacon.

Okerlund then interviews JJ Dillon who returns as Chairman of the Executive Committee. While Dillon declares that the steel cage match WILL HAPPEN, Bischoff interrupts and questions Dillon’s “stroke.” Dillon retrieves a document from his jacket and hands Bischoff a notarized contract. Before the interview ends, Bischoff complains and demands Nitro for the nWo. The power struggle for WCW’s hottest TV show begins.

Summary: The Zbyszko factor played a major role in the story of the match, yet it still sucked.

After the match, Syxx ambushes Zbyszko from behind; however, Zbyszko recovers with a legit front face lock that knocked Syxx out of action. In fact, this is Syxx’s last WCW PPV. Perhaps he’ll show up on Nitro in traction. 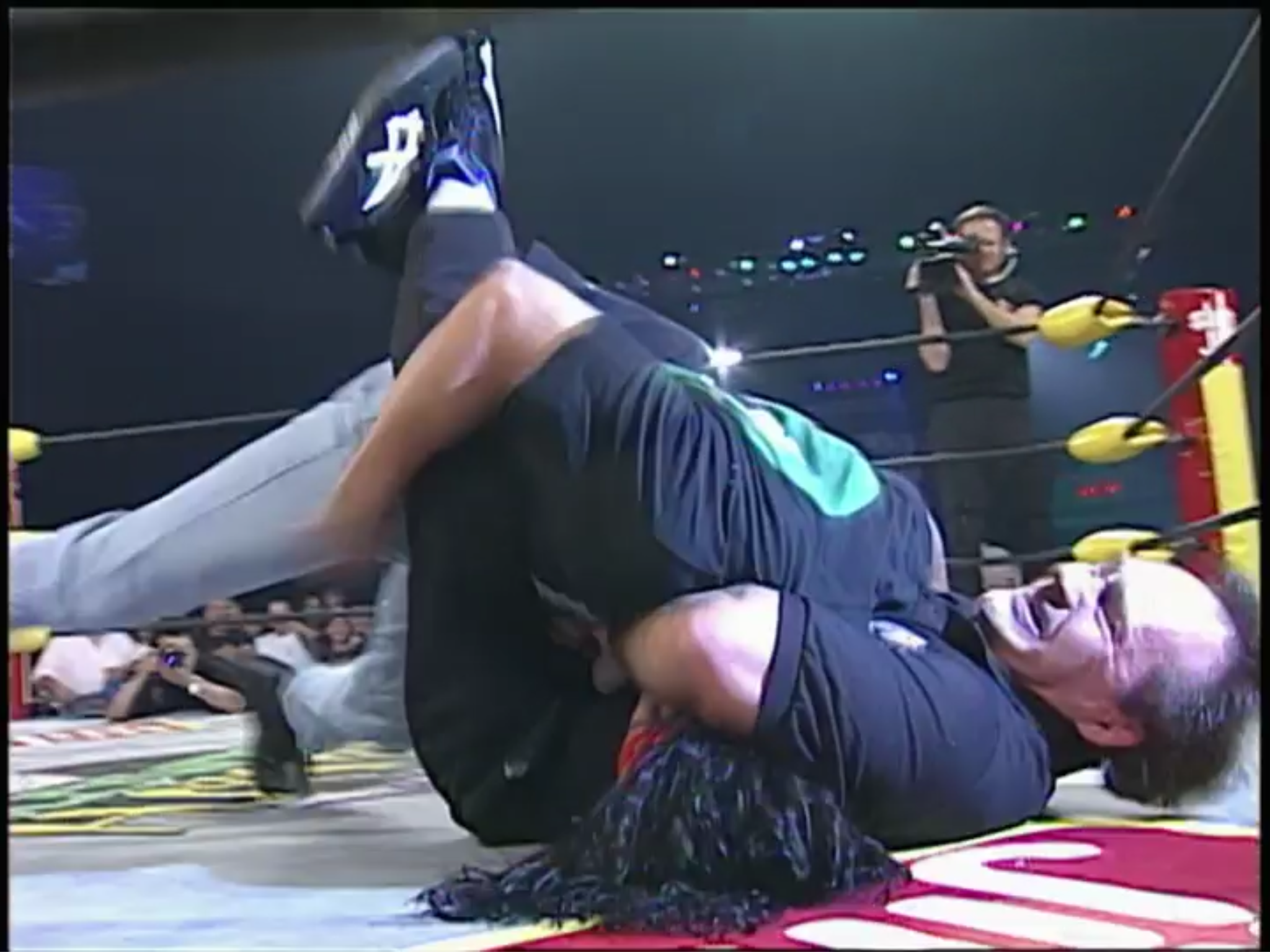 To save Syxx, Bischoff enters the ring and kicks at Zbyszko. As Zbyszko turns his attention toward him, Hall lays him out from behind. Hall and Bischoff double-team Zbyszko as Bischoff delivers a side kick. To mock him, Bischoff places a foot upon Zbyszko’s chest, and Hall counts the felonious pin. 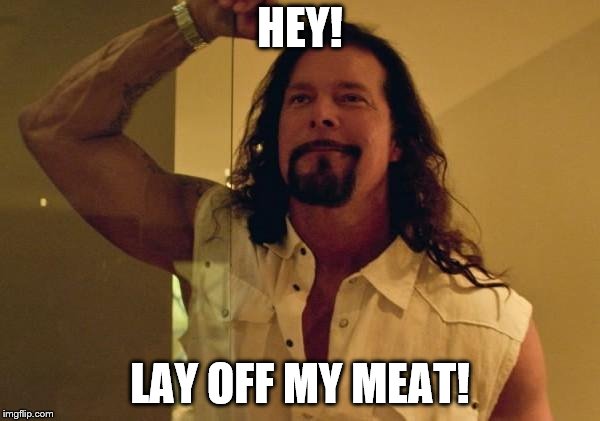 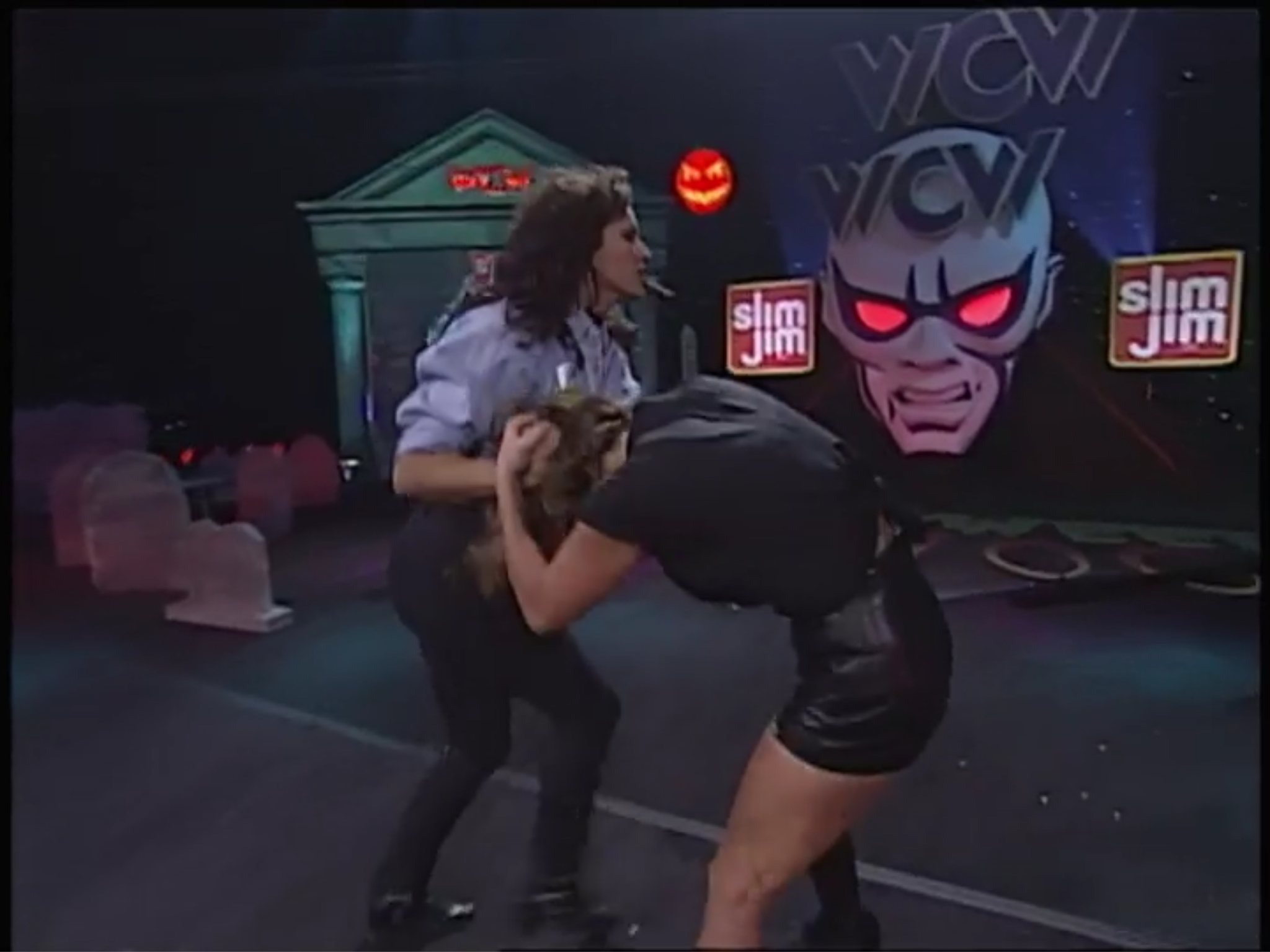 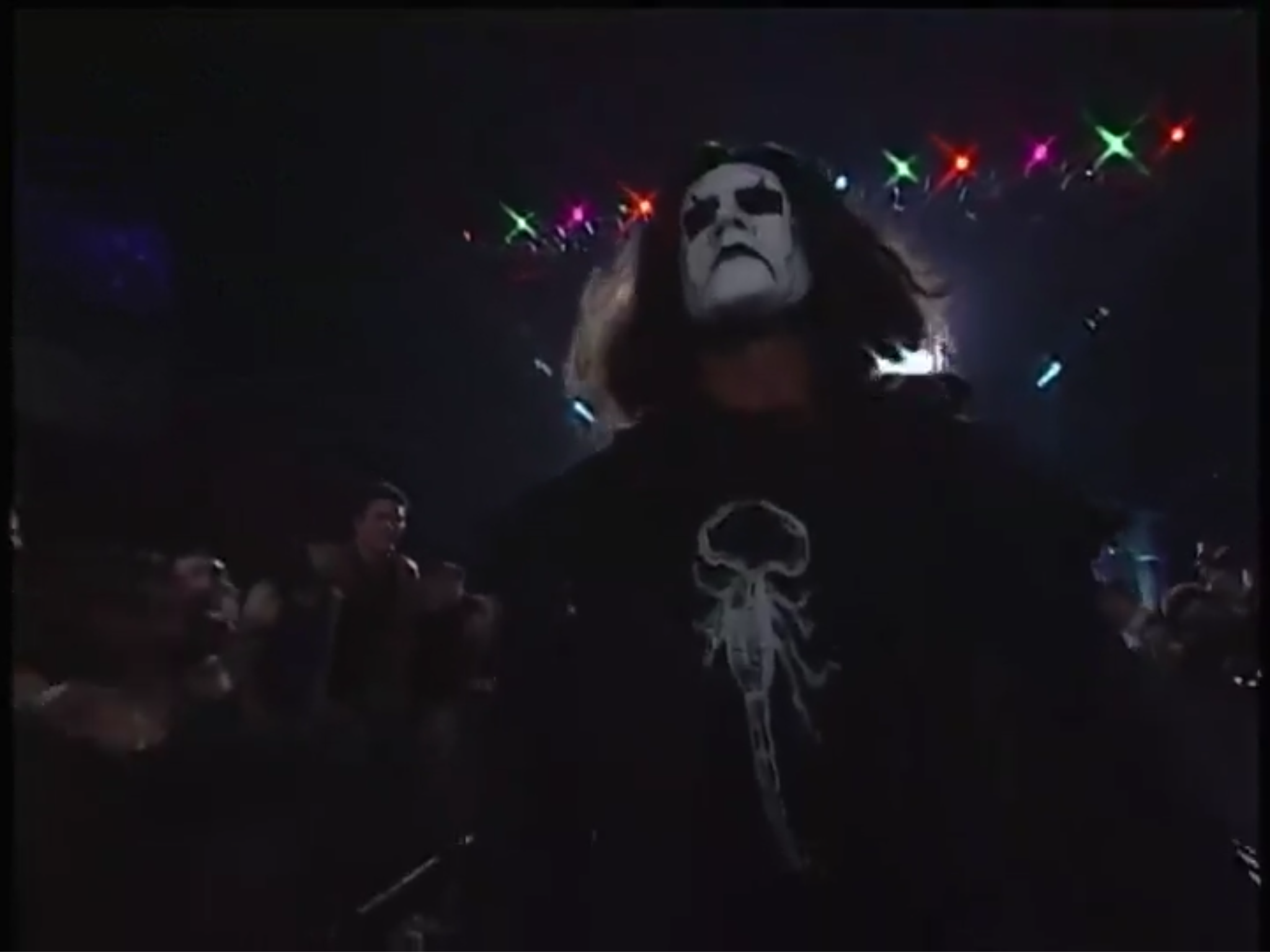 Summary: Excellent match where each wrestler used psychology by damaging each other’s ribs. Ultimately, it cost DDP the most due to nWo shenanigans.

After the match, Savage nails Patrick and DDP before returning backstage. Paramedics then strap DDP on a gurney and haul him backstage for medical attention. Abruptly, Savage gives DDP another beating before being escorted away. 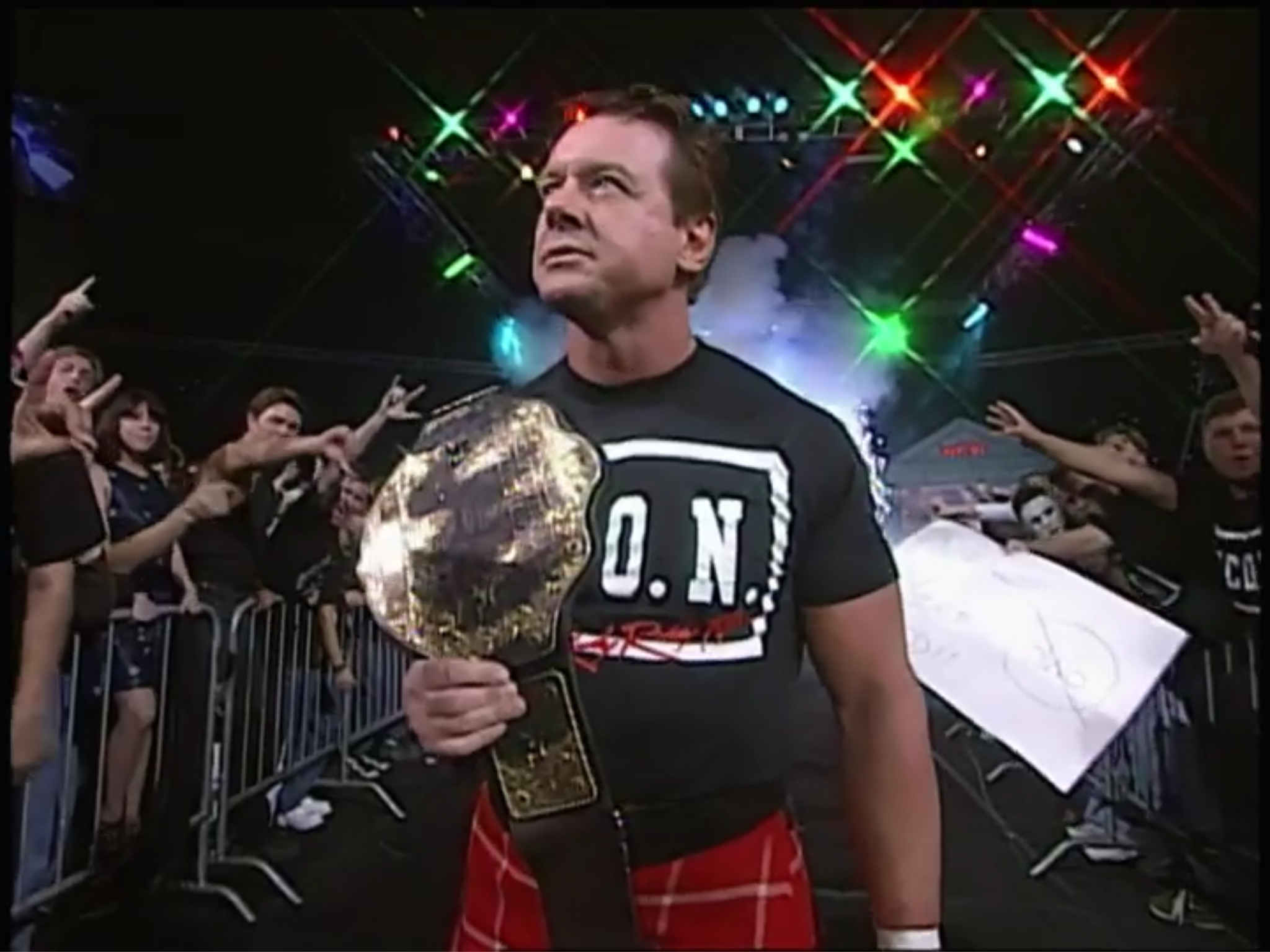 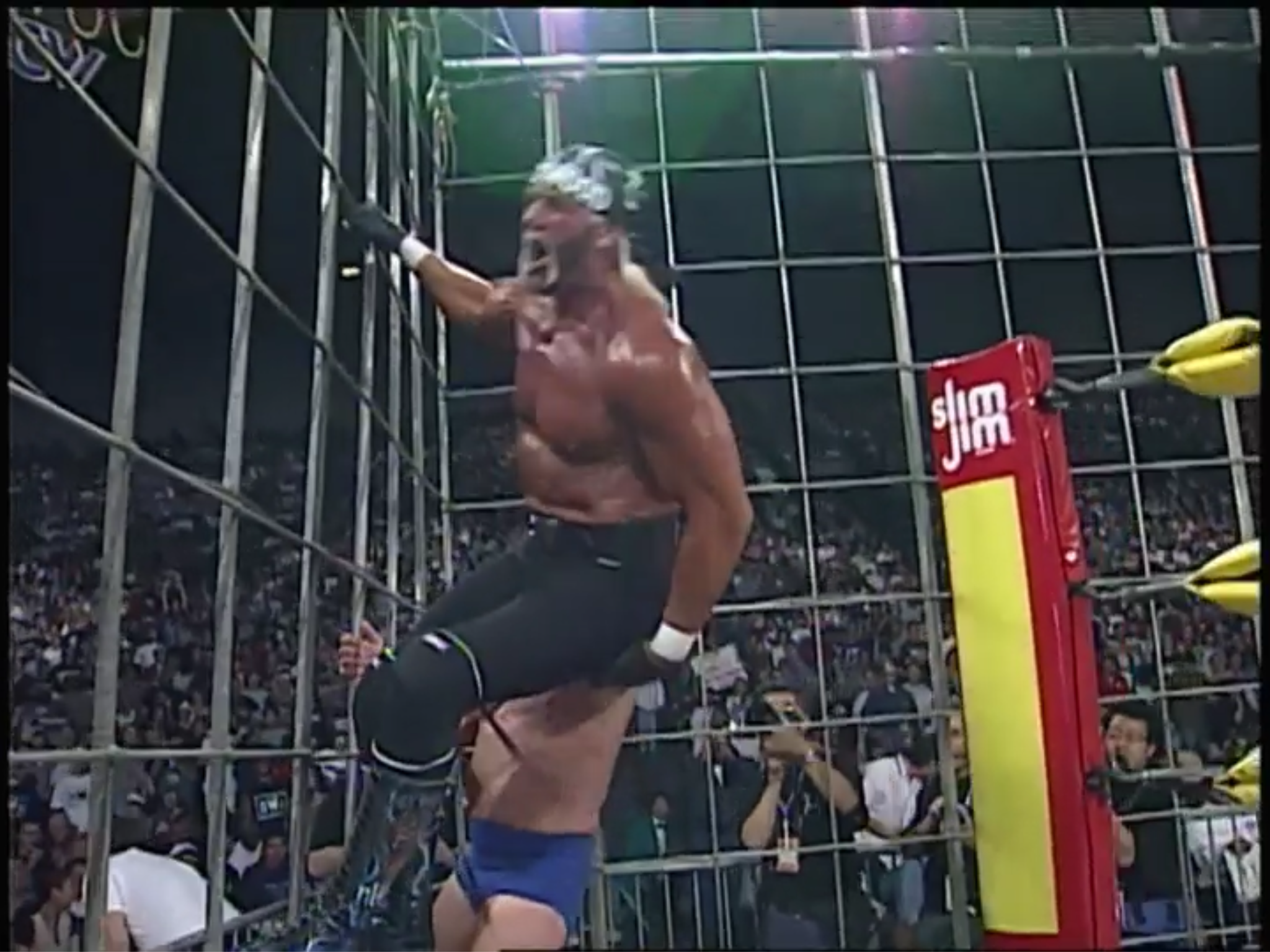 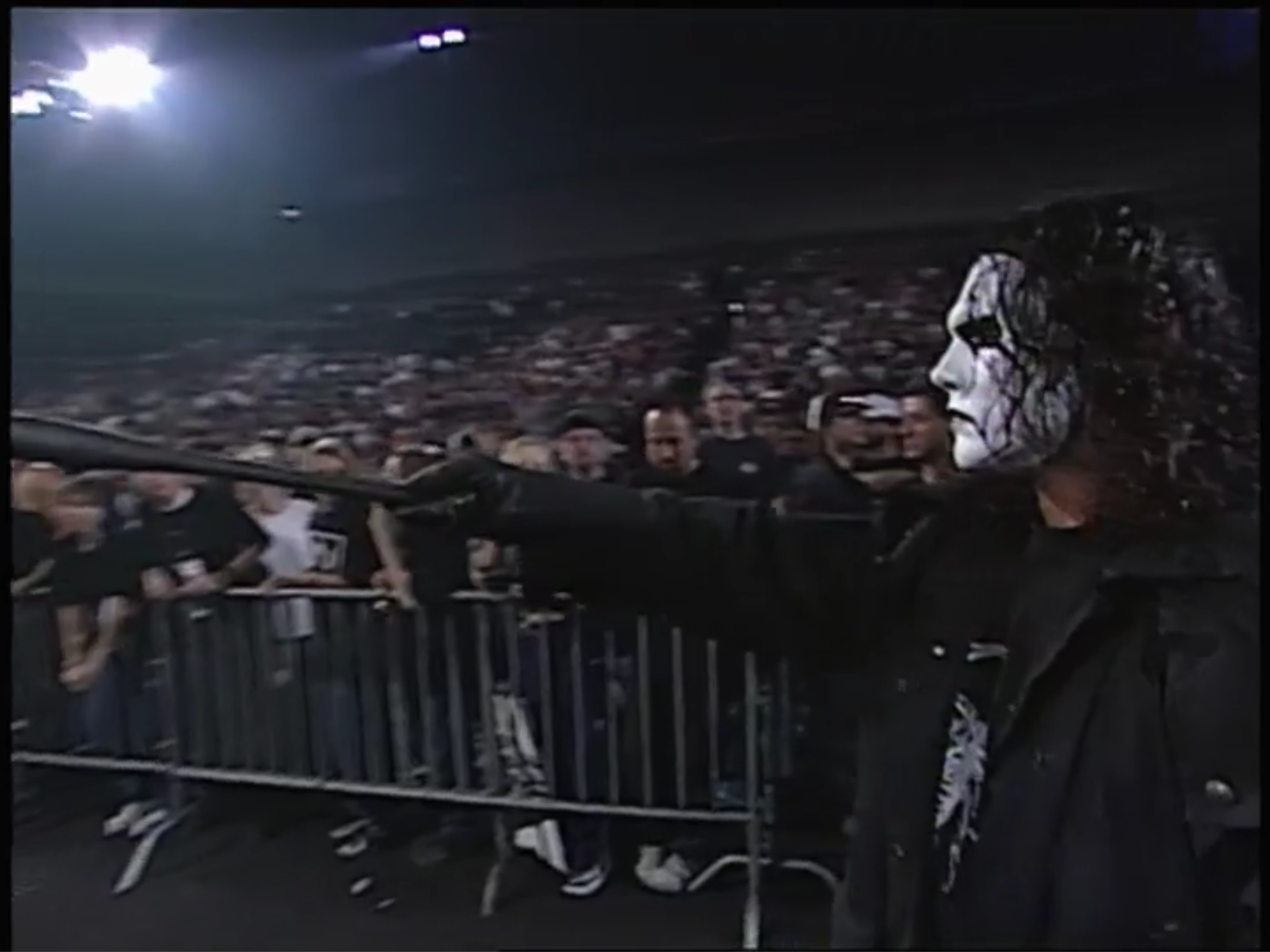 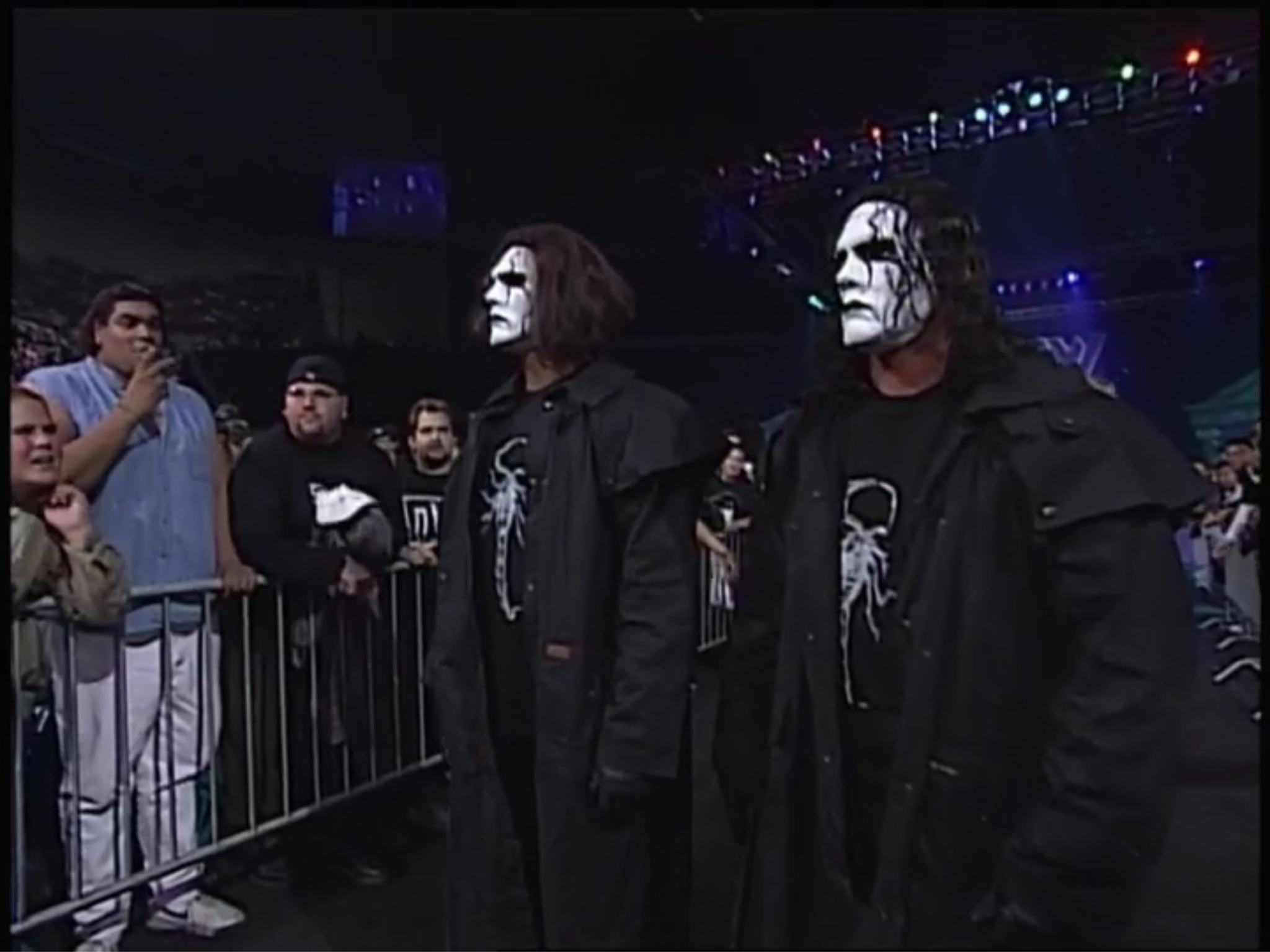 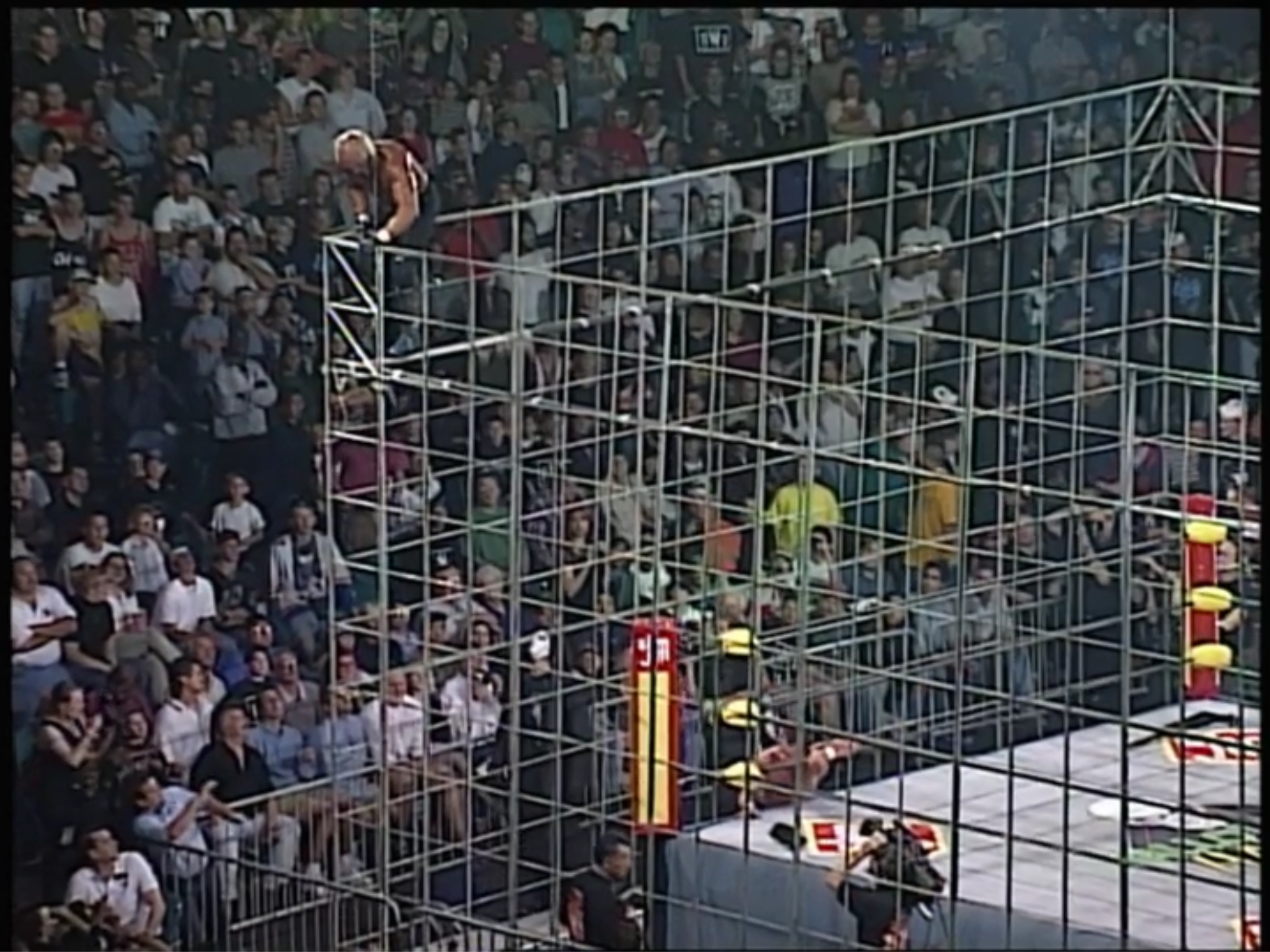 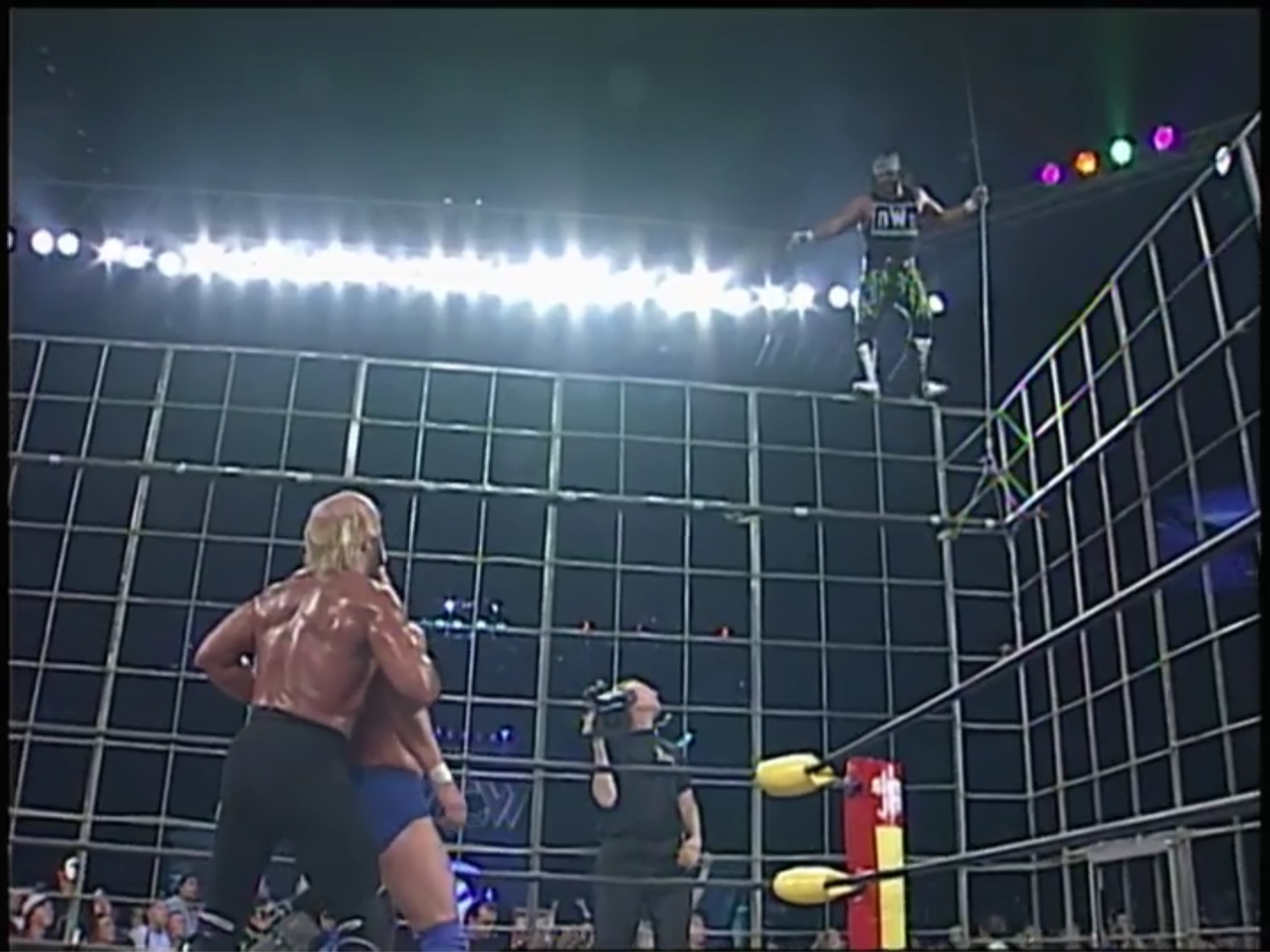 Summary: If you’re a longtime fan, and you always wanted to see Hogan versus Piper in a cage, then this match is for you. Without the response from the Vegas faithful, this match would have earned nothing and liked it.

After the match, Savage nails Piper, and a crazed Bischoff enters the cage unbeknownst to Piper. While Savage keeps Piper at bay, Hogan CROWNS Piper with the World title belt. He then drags a “Sting” clone into the ring, rips off the mask and wig to reveal “Hardwork” Bobby Walker, and tosses him over the top rope to the floor. 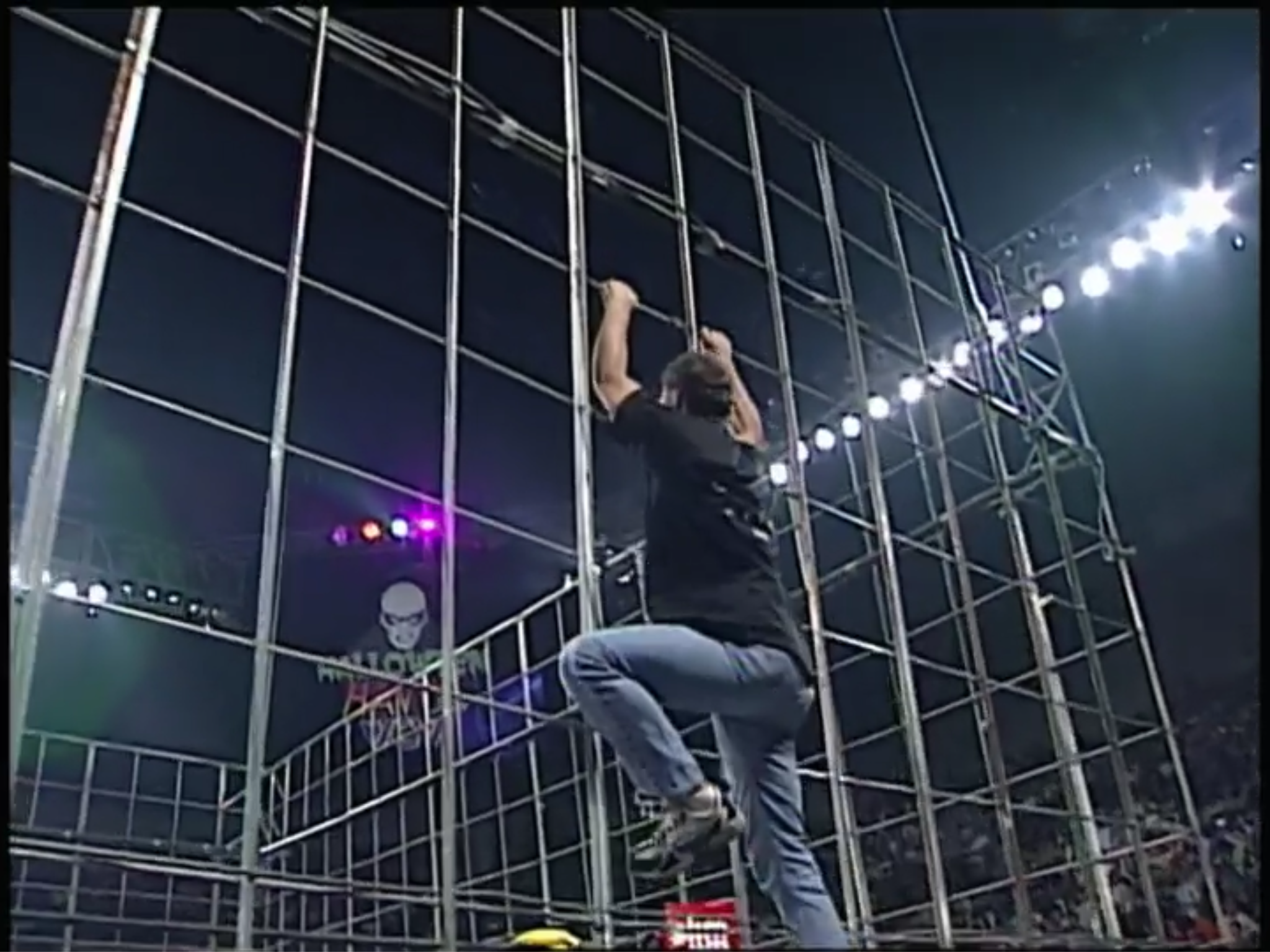 Conclusion: If one were to judge the PPV based upon the main event alone, one should request an immediate refund due to inappropriate value based upon performance. Conversely, if one groups Mysterio-Guerrero, Savage-DDP, and Flair-Hennig together, one certainly earned value for the PPV dollar. My recommendation is to watch the show, make some popcorn and cocktails during the Mongo and Disco matches, and enjoy the show without the main event.