Who will win the dueling canes match? Will Taz retain against the Beast from the East? And who is Storm’s mystery partner in the main event? Let’s find out!

A car pulls up to the Asbury Park Convention Hall, and Taz emerges. As he enters, Taz admires the atmosphere for the PPV and states “I’m ready.” 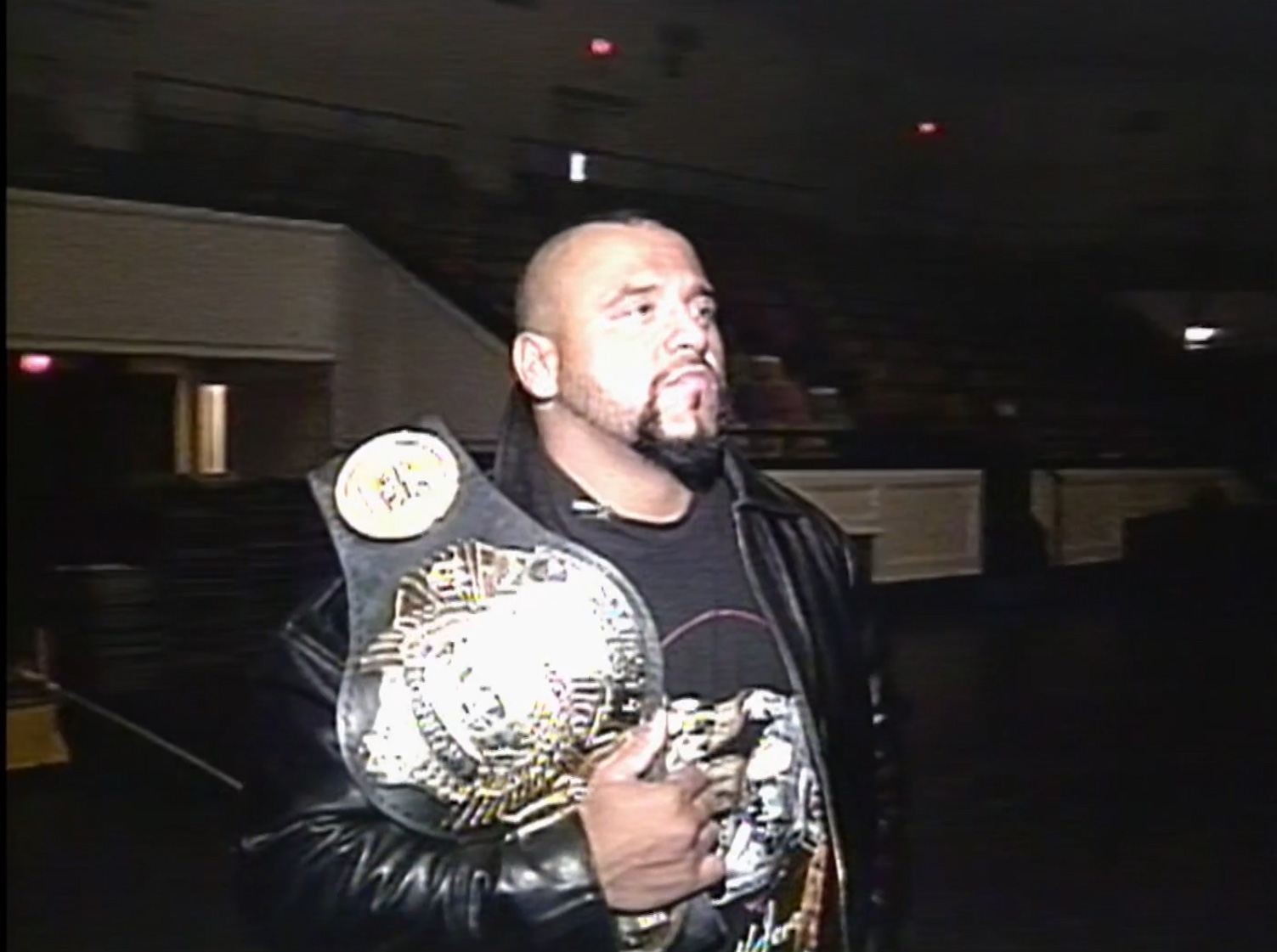 Summary: Solid opener as the comedic heels kept the Asbury Park faithful on their toes only to fall short against the grizzled veteran and remarkably sharp rookie. RIP Tracy Smothers.

After the match, dissension among the FBI leads to a Smothers shove of Rich who walks away in disgust.

Video airs featuring W*ING Kanemura who will not compete tonight since he wrestled in Tokushima, Japan last night. D’oh! The feed segues to Tanaka with some footage against Mike Awesome.

Summary: While Tanaka used some good psychology by working on Furnas’ knee, the sloppiness between them became the story of the match. Therefore, I took the psychology star away, and this match gets nothing.

After the match, Wright jumps into the ring and berates Furnas. He namedrops all of the key players in the WWF and promises Furnas that he “will never work on Monday Night RAW again.” In response, Furnas tries to leave, but Wright stops him. Furnas then nails Wright knocking him OUT COLD.

Afterward, he grabs the ECW t-shirt from the timekeeper, refers to Wright as “errand boy,” and instructs him to tell Vince McMahon to “kiss (his) ass.” He then puts on the shirt, and the Asbury Park faithful welcome him to the ECW brotherhood.

Styles apologizes about preempting a dueling canes match between Sandman and Sabu because the PPV providers didn’t want the match to air live. Suddenly, Jason, along with Nicole Bass, interrupt him to “play the tape.”

A video from “earlier today” is shown where Tommy Dreamer arrives at the arena with his dog but without Beulah McGillicutty. Bass then threatens Styles in an absolutely colossal waste of time.

Summary: This match was ahead of its time as both wrestlers broke out their entire arsenal against one another to put on a clinic. Fantastic job, guys!

After the match, RVD grabs the microphone and offers his hand in sportsmanship. When RVD pulls it back, Scorpio responds with his own offer. They shake hands and raise arms until Scorpio clotheslines him.

Sabu returns, and he and RVD double-team Scorpio. As Sabu brings a table into the ring, they place Scorpio atop it. RVD and Sabu then mount adjacent top turnbuckles, but Sandman returns to cane Sabu. Scorpio jumps off the table and dropkicks RVD off the top turnbuckle. Sandman attempts a huracanrana through the table with Sabu, but they miss the table entirely. That could have been DANGEROUS.

Scorpio grabs the microphone and praises ECW much to the delight of the Asbury Park faithful. When Sandman offers him a beer, they dance while enjoying their adult beverages.

Video airs featuring Storm and Candido. Upon Sunny’s brief appearance, Candido turns on Storm by piledriving him on a belt. This is a quick teaser for the main event, and it works extremely well.

Prior to the next match, Gertner gets on the microphone and introduces the Dudley family as only he can. Parents, please turn off the PPV at this point.

Summary: Hardcore wrestling, anyone? That dive from the upper deck was the main highlight of the match. 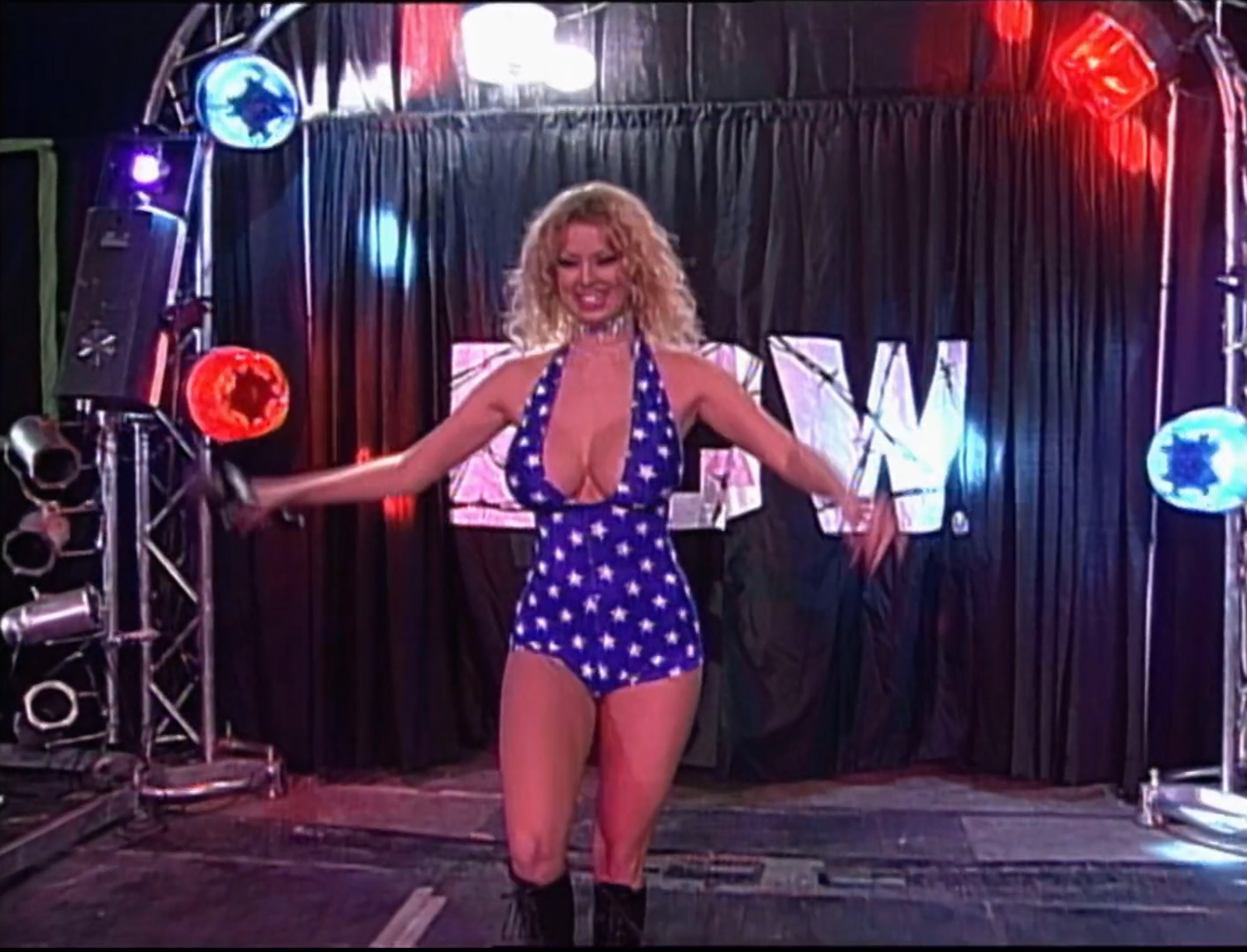 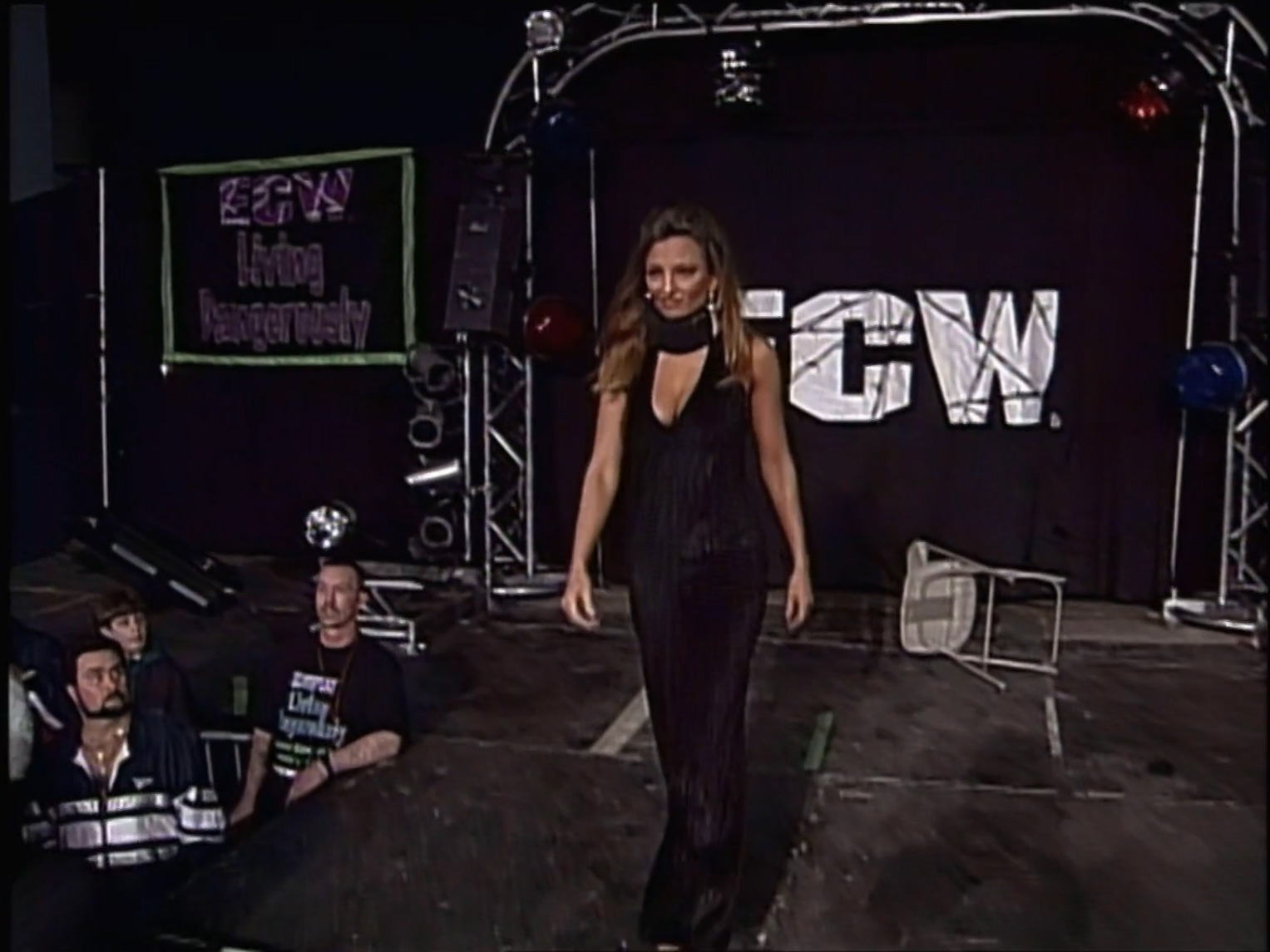 Summary: Good story, and the Asbury Park faithful enjoyed every minute of it.

We then recap the story that led to the Bigelow/Taz match. 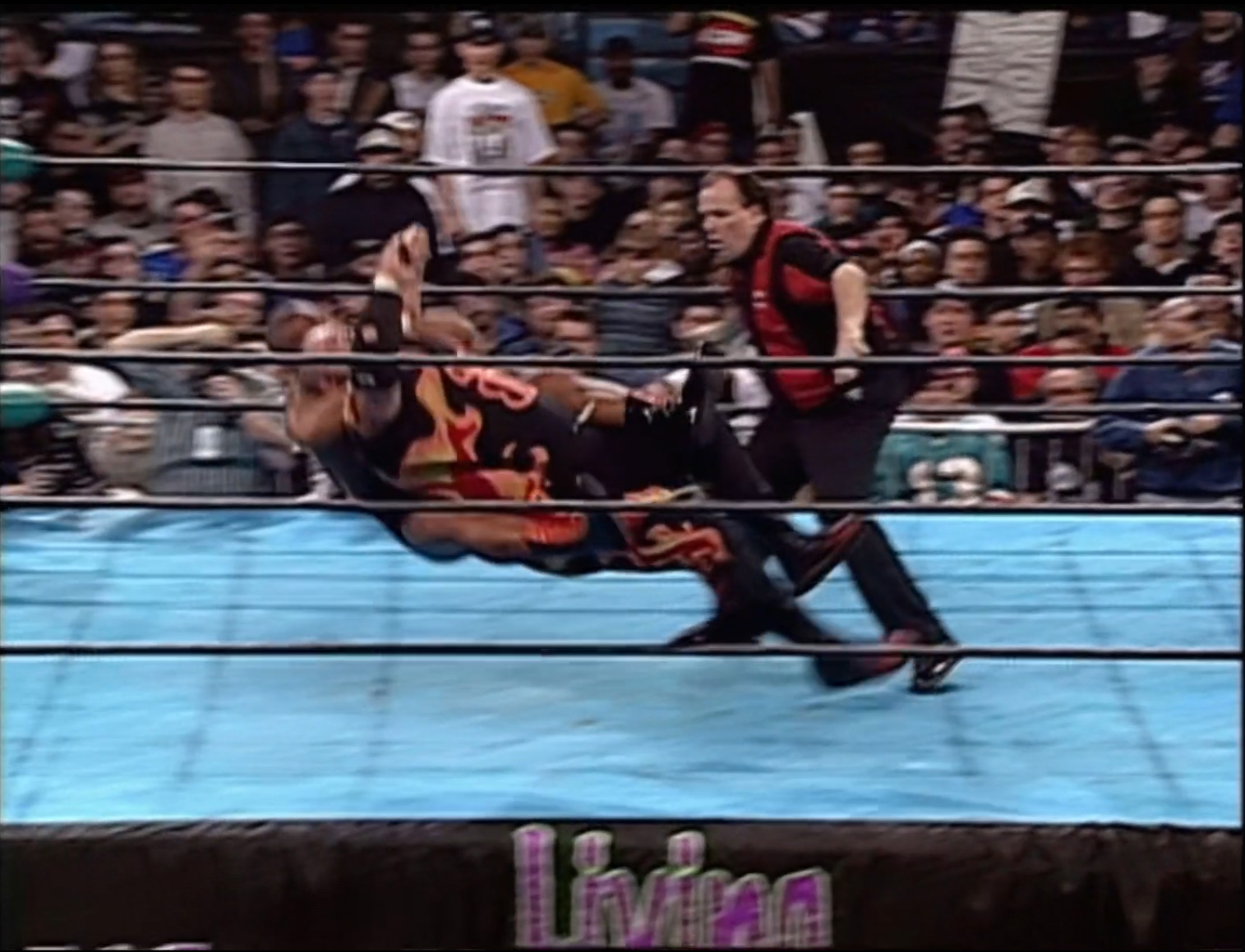 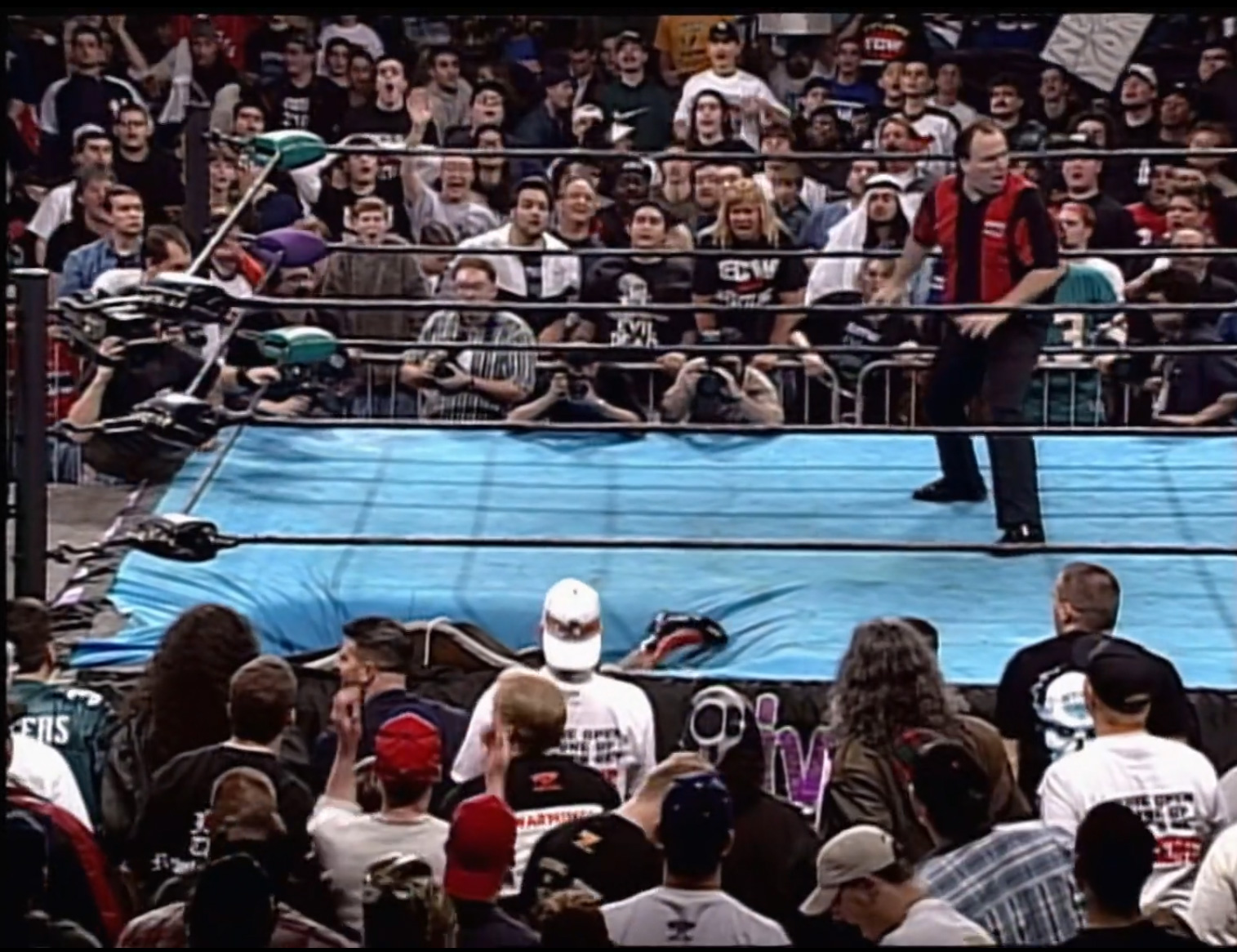 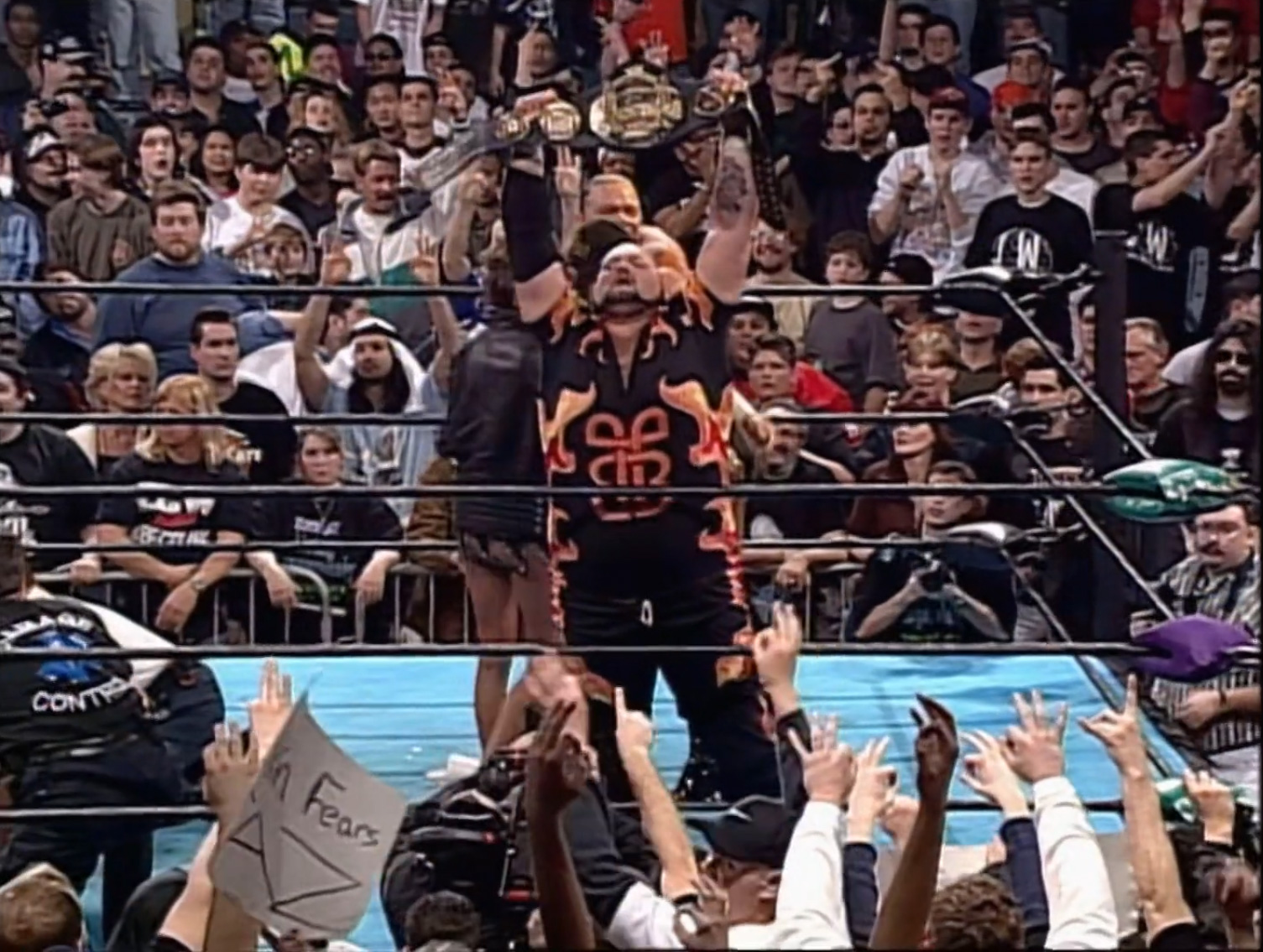 Summary: What an amazing bump! As always, Bigelow’s great for the big man-little man matches. Although this was more ECW-style, the bump through the ring leading to the title change in his hometown had to be a career highlight for him.

After the match, Damage Control arrives for Taz, and the Triple Threat with Francine get the NEW World TV champion to his feet. Meanwhile, Paul Heyman, on camera, screams at Styles to “buy (him) some time.” Couldn’t he have said that into his headset? 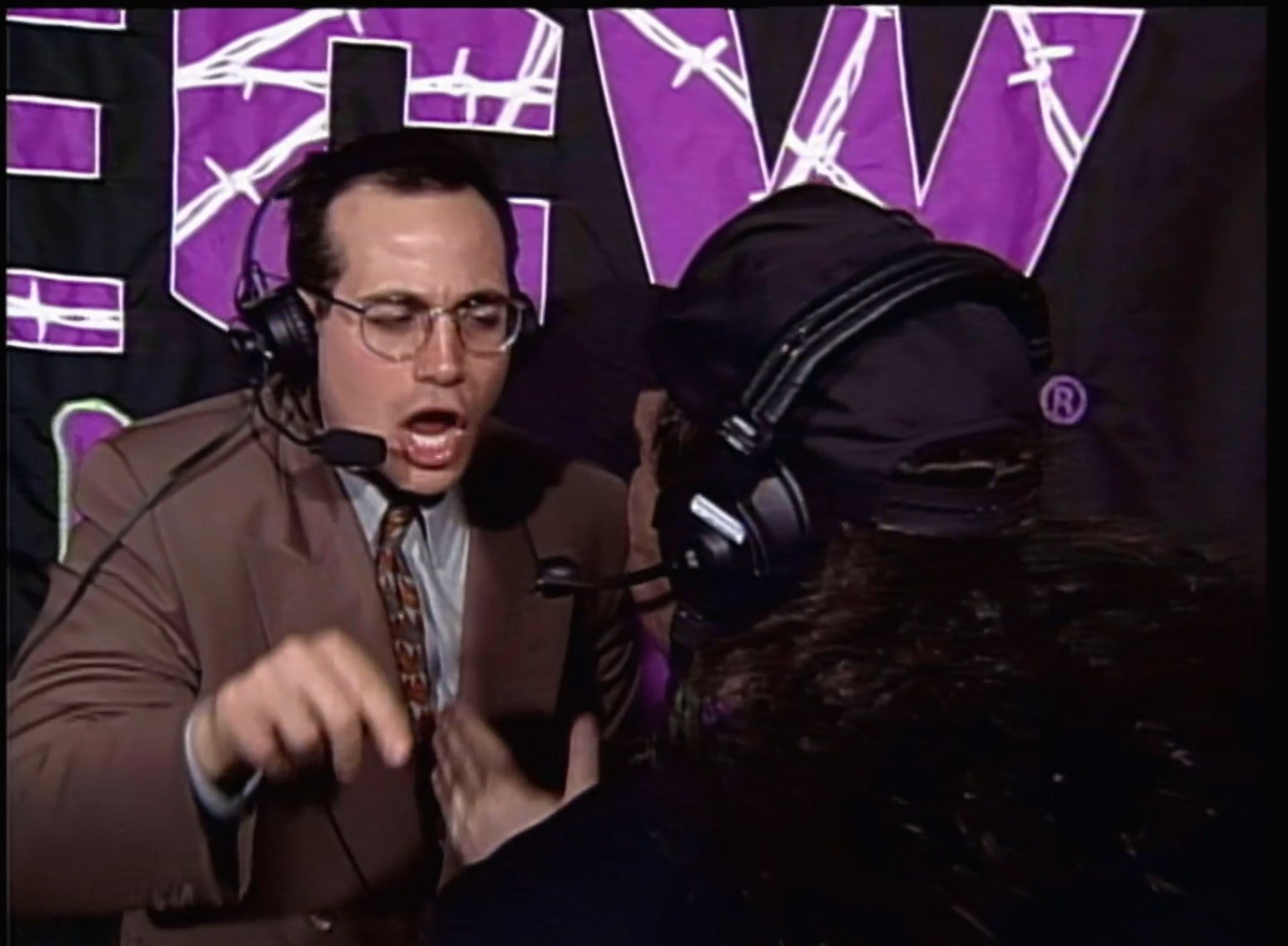 Heyman and Styles then have a heated discussion about showing the dueling canes match. 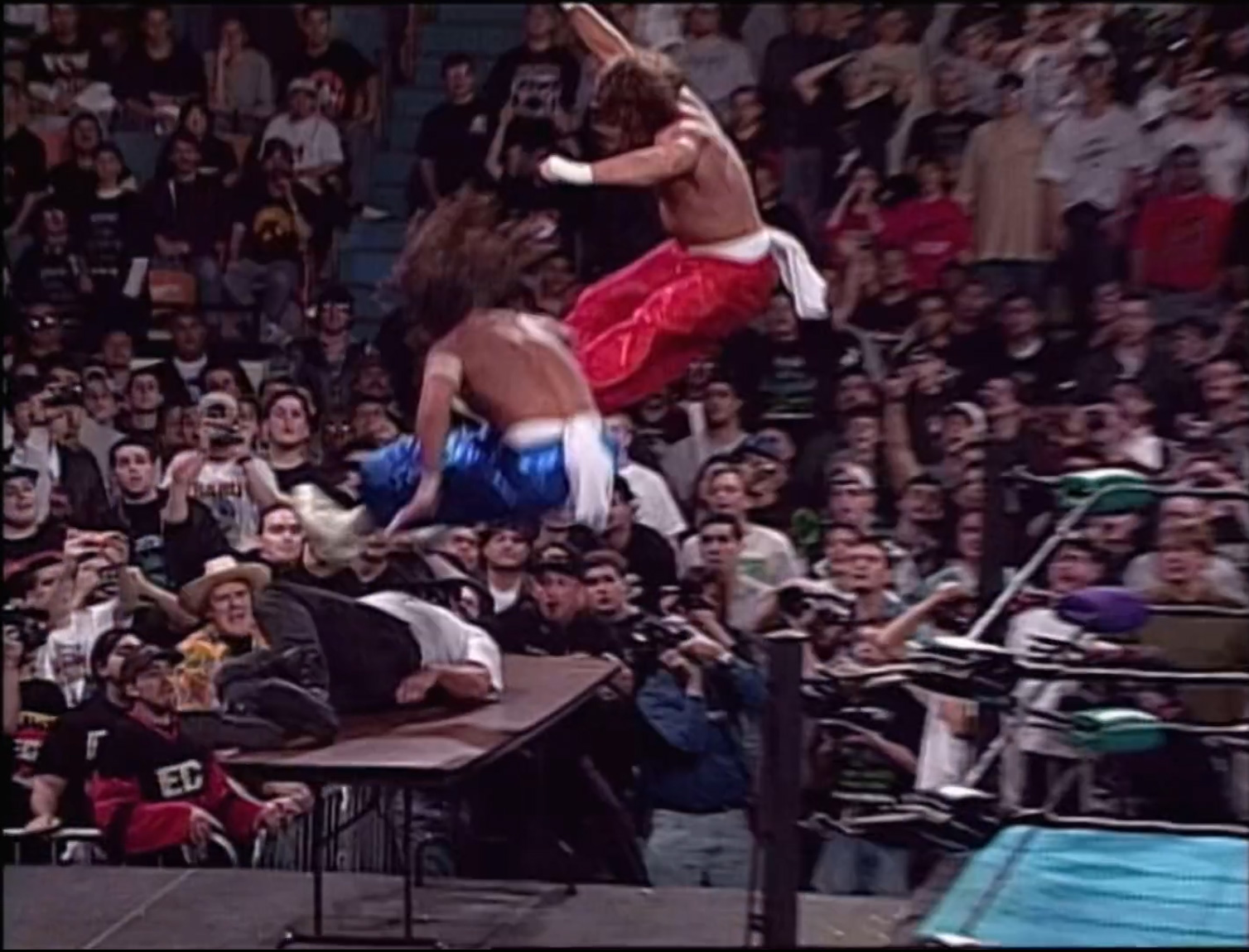 Summary: OK, I get it. Since Bigelow and Taz broke the ring, they needed something to fill time to fix it. Hence, the story of the “censors” not wanting this match shown was all bullshit so they could insert this match.

After the match, a disgruntled Styles exclaims: “Are you kidding me? Holy shit!” While the “censors” allegedly had their “issue,” the PPV companies more than likely didn’t appreciate that utterance.

When we return LIVE, the Asbury Park faithful shake their Styrofoam heads while chanting “we want head.” Yes, folks, this was an actual thing that happened back in 1998. Styles angrily rants at Heyman about his “office job.”

Styles also mentions that the Al Snow versus John Kronus match is cancelled due to the ring, but the main event will transpire notwithstanding.

Prior to the main event, Candido ponders who Storm’s mystery partner could be. 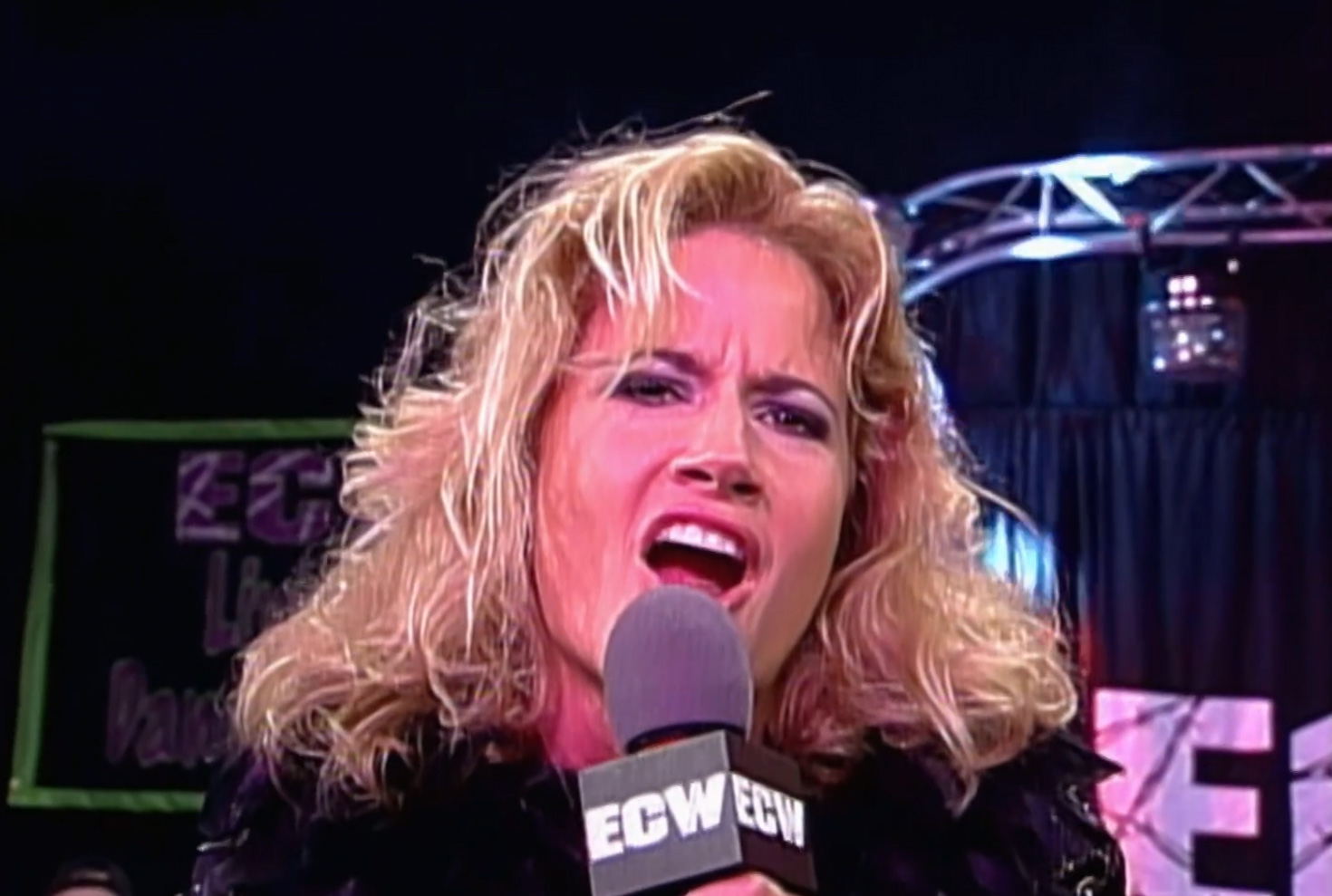 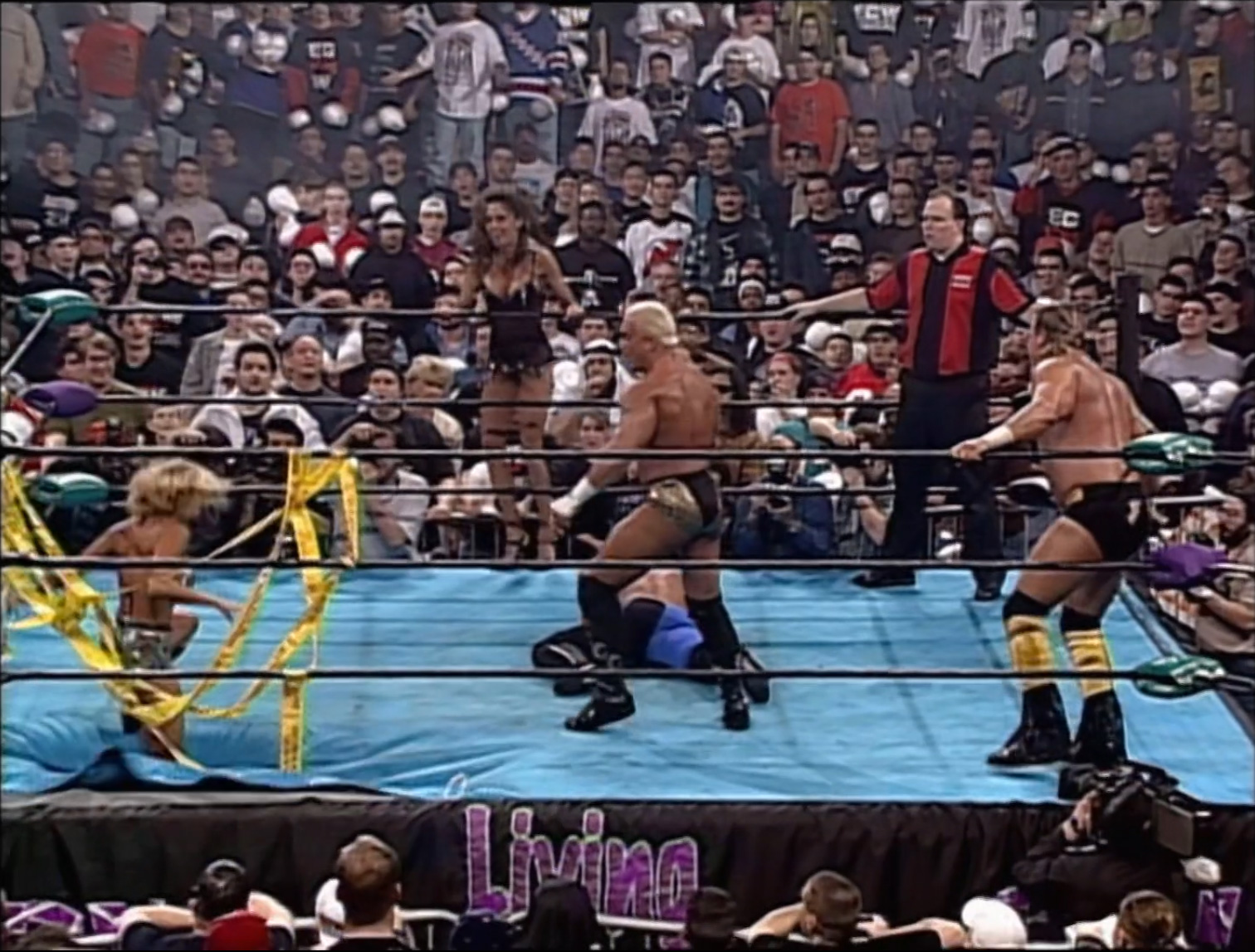 Summary: Giving the audience what they want is a guarantee that they’ll go home happy and want to spend their hard-earned money again the next time the show comes to town. I liked the swerve at the beginning, and Snow’s winning a main event match must rank right up there as a career achievement for him.

After the match, the Asbury Park faithful continue to shower the ring with Styrofoam heads while the babyfaces celebrate among them. Francine and Sunny bitterly toss the heads back but to no avail.

Conclusion: The Bigelow-Taz match is one not to be missed. While the dueling canes match was a disappointment, the dive from the upper deck in the three-way dance is quite a highlight. Also, for fans of today’s wrestling, check out Scorpio-RVD. Just be sure to avoid Furnas-Tanaka like the plague.