Are you ready to hype Chi-Town Rumble? Well, Ross and Magnum are as they detail what tonight’s show contains and add the spice of NWA World Champion “Nature Boy” Ric Flair and #1 contender Ricky “The Dragon” Steamboat being here. This episode has to be awesome, right?

By the way, Clash V is sponsored by Coors Light. Why, you ask? Because in order to survive in Cleveland, one must drink plenty of Rocky Mountain beer. Uh huh. After a commercial break, Bob Caudle interviews Steamboat with his 19-month-old son Richie. We then revisit World Championship Wrestling from 2/4 when Steamboat gave Flair a gorilla press slam and ripped his $100 shirt off. Summary: Way too long for what became a showcase match for Reed. According to Ross, he’ll face Sting at Chi-Town Rumble. He’d better up his game for that match.

After a commercial break, Flair comes to the ring with Hiro Matsuda and an entourage.

No, not that one. This one has long legs and wears evening gowns. Wait a minute! What happened to JJ Dillon? Oops. He took his credentials to the WWF to work behind the scenes. Regardless, Flair, wearing a mink coat, flaunts his lavish lifestyle and calls out Steamboat.

When Steamboat enters the ring, Flair taunts his family-man lifestyle while gloating. In rebuttal, Steamboat calls out Flair for being materialistic. When Flair tells him to “help the Mrs. with the dishes,” Steamboat nails him. As they fight, Steamboat tears Flair’s “$1500” suit jacket right off him then hits Matsuda. Next, he rips both the shirt and pants off Flair. Following that, he gives Flair a gorilla press slam followed by a back drop. To highlight the segment, he mounts the top turnbuckle, hits the flying body press, and the Cleveland faithful want to award him the title right then and there.

Taking exception, Matsuda joins Flair to double-team Steamboat. When Steamboat makes a comeback, he gives Flair a cross-corner whip that results in a Flair flip to the floor. He then follows Flair as they brawl into the crowd. After Flair heads for higher ground, Steamboat returns to the ring and puts on Flair’s clothes and sunglasses. He then tosses the tattered clothes into the crowd. Wow! What a hot segment! Summary: Showcase match for Luger who used Barry Windham’s move in anticipation of their US title match on Monday night. Match 4 for the US tag team titles: The Varsity Club (champions w/ Kevin Sullivan) versus the Fantastics Summary: The champs are ready for their test against the Road Warriors.

Match 5: Ricky “The Dragon” Steamboat versus Bob “The Cat” Bradley 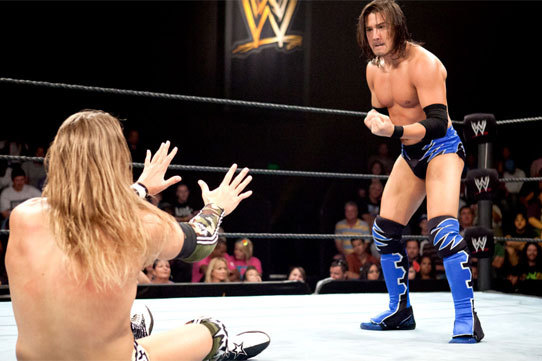 Summary: Showcase match for Steamboat who is primed and ready for Monday night.

Backstage, Caudle interviews Sting, Junkyard Dog, and Hayes. Sting’s so fired up that he can barely string a sentence together. In the meantime, Hayes “knows how to beat (the Road Warriors) and (is) fixin’ to do that.” While the supposedly highly-caffeinated babyfaces return to the dressing room for a strategy session, Sullivan, with an evil look on his face, locks them in their dressing room. How dastardly!

After the match, Sting gives Sullivan an atomic drop on the floor then nails him with a chair.

After a commercial break, the chaos continues while Ross and Magnum shill the PPV.

See you for NWA Chi-Town Rumble!