WCW Clash of the Champions XXXV

With four title matches, who will retain and who can achieve gold? Will Sting answer Dillon's ultimatum? If so, how? Let's find out!

Prior to the opening match, we revisit last Monday's Nitro when Sting rejected another unremarkable contract offer from J.J. Dillon, and the Birmingham faithful notified him what Sting wanted. 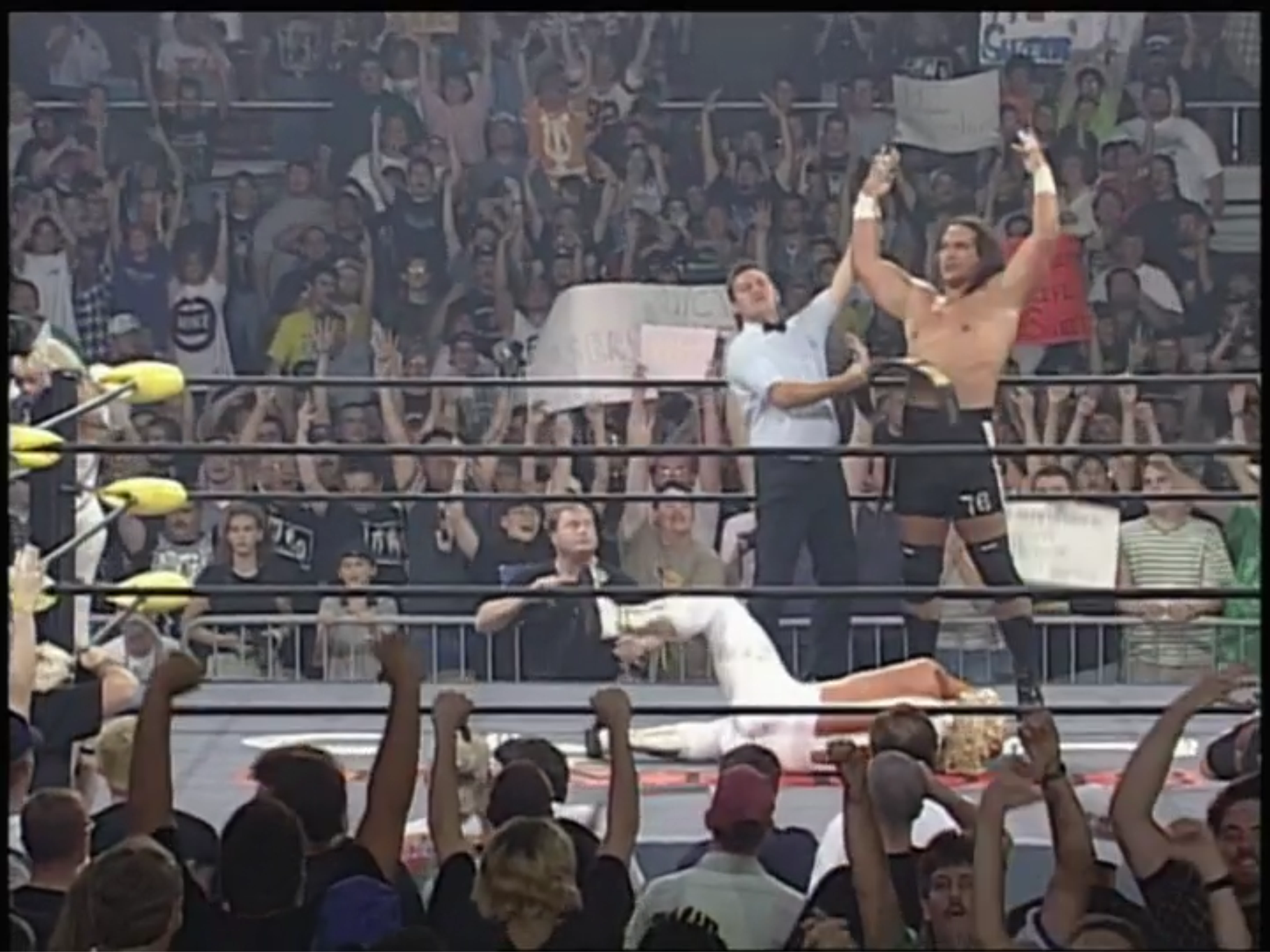 Summary: For the second time in three years, Jarrett lost a title in his hometown. As expected, he carried the match until the finish. While the match wasn't worth much, the Nashville faithful ate it up with a spoon.

After the match, Debra tries to reconcile with Mongo ("I knew you could do it all along.") However, Mongo replies "it ain't gonna be that easy" and storms off.

At the entrance, "Mean" Gene Okerlund interviews Wright. When he requests that Wright speak only in English, Wright instead verbalizes in German. Okerlund then threatens to pull the interview, and Wright cuts a promo on Dragon in English while stammering through a bad joke. 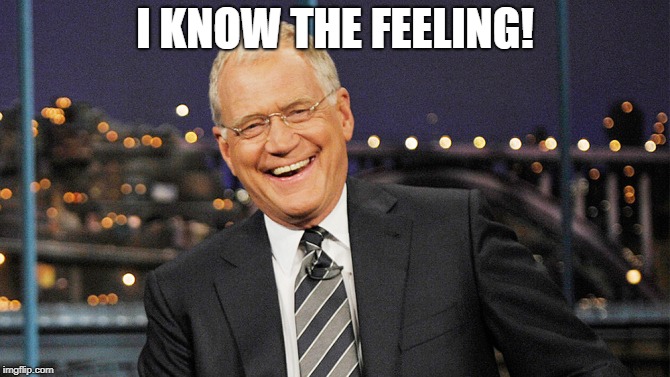 On WCW Saturday Night, hey....I already told you about this in my Nitro reflection! Watch it already!

On the set of Dinner & A Movie, Okerlund interviews Paul Gilmartin and Claude Mann. As Okerlund plugs The Jerk tomorrow night on TBS, Gilmartin states he and Claude are making "big jerk chicken." 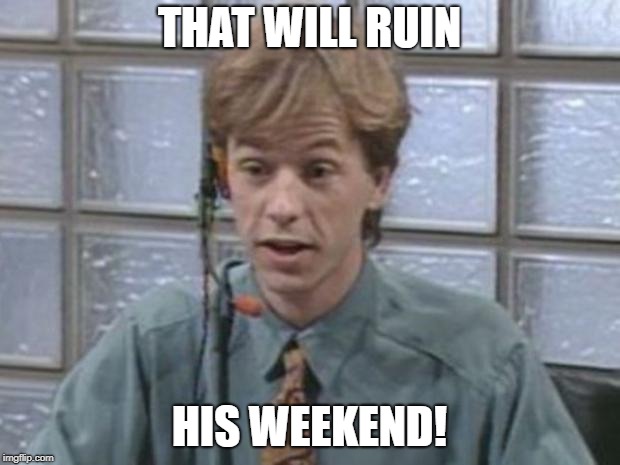 "Iron" Mike Tenay introduces a video featuring Ultimo Dragon. At this point, WCW finally corrects itself by calling him Ultimo rather than Ultimate. 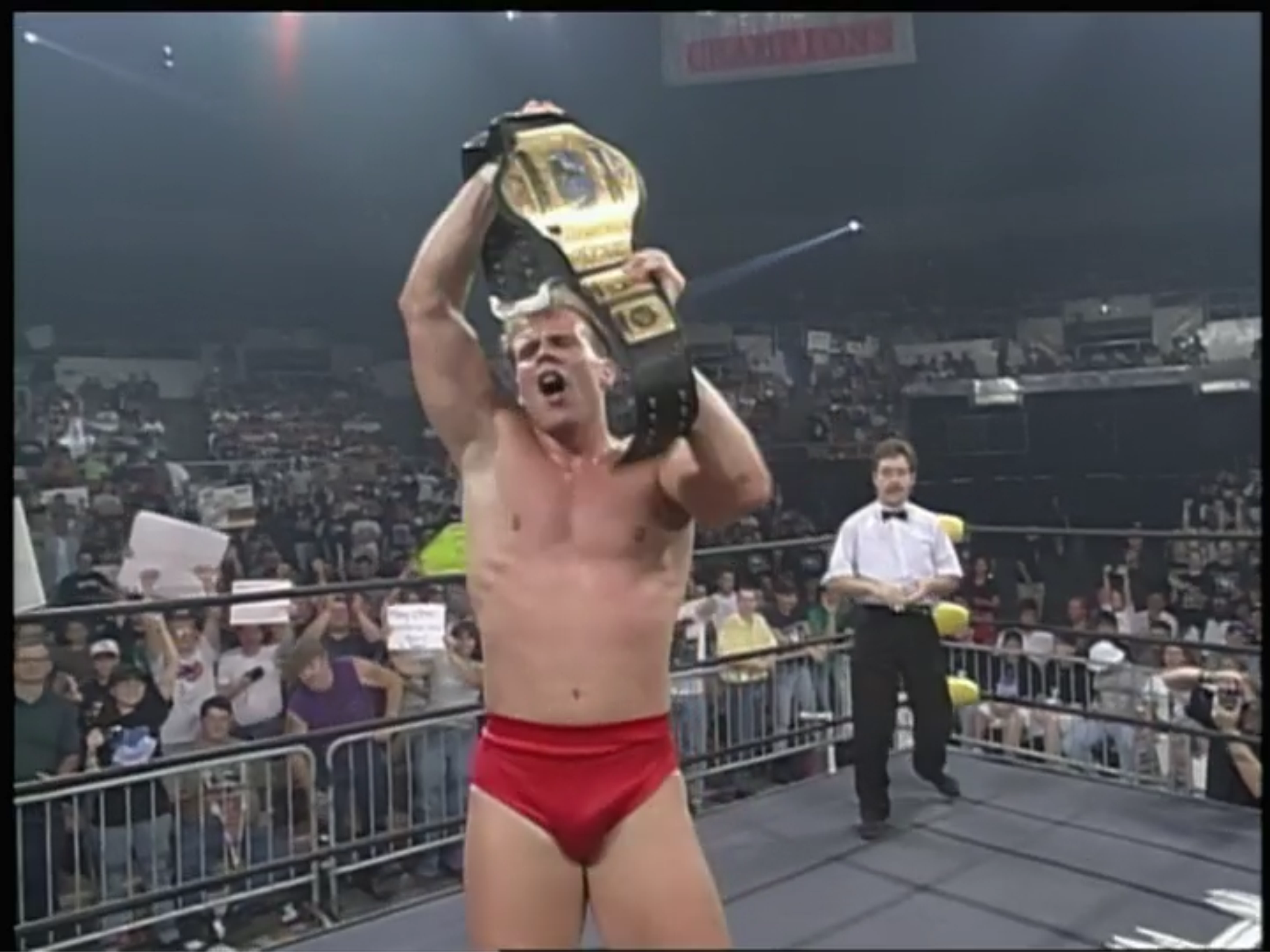 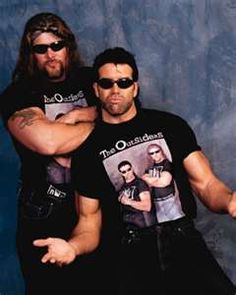 Summary: Regrettably, I must deduct ½* for the obvious botch. Otherwise, these guys busted ass to thrill the Nashville faithful. On the other hand, crowds still don't fully support babyface Jericho.

After the match, Eddie dropkicks Jericho. He then delivers a brainbuster, mounts the top turnbuckle, and hits a frog splash. It would seem that Eddie's full of Latino heat.

vAfter tags were exchanged on both sides, Psicosis delivered a superkick to Guerrera.

Summary: Spotfest, as you'd expect, but these hombres busted their ass too. Sadly, the Nashville faithful went out for popcorn.

On the set of Dinner & A Movie, Okerlund shills The Jerk tomorrow night right after Braves baseball. Mann then announces that they have "Macho Nachos, Macho Mayo, Savage garden salad, Macho gazpacho, and nWokra. To top it off, Gilmartin adds "WCW cream puffs" for DDP. Both Mann and Gilmartin then open their shirts to reveal nWo t-shirts.

Savage emerges to celebrate the new celebrity members and informs OKerlund that he's not leaving. We then revisit a previous episode of Dinner & A Movie when Savage made a surprise appearance. While an nWo cake gets its candles lit, DDP arrives, destroys the set, and delivers the Diamond Cutter to Gilmartin. 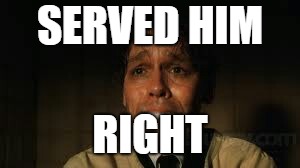 Promotional consideration paid for by the following: Slim Jim, Eagle One, and Lava soap.

Lee Marshall then delivers the 1-800-COLLECT road report from “Columbia, SC." Ain't no way in hell that WCW allowed Marshall to stay in Columbia for four days.

Summary: If Flair and Hennig are going to team together going forward, they need to communicate better. At the point that Flair distracted Anderson, the match became disjointed; thus, the finish didn't occur naturally.

In the ring, Okerlund interviews Flair and Hennig. When he asks Hennig about his status as a Horseman, Hennig says "no." Flair eagerly re-asks the question, and Hennig repeats his negative response. Maybe we'll learn more on Nitro. 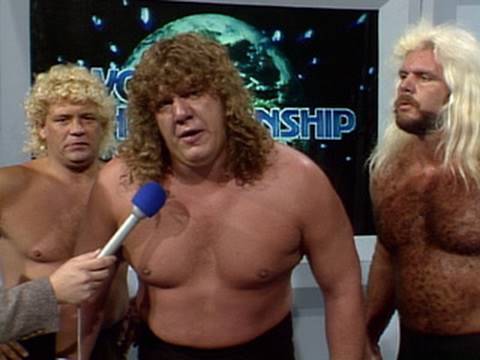 Summary: Hot main event where chicanery by the nWo allowed them to win.

After the match, paper falls from the ceiling. Hall holds one up, and it reads "nWo: the 1st year too sweet!"

Eric Bischoff leads the nWo to the ring for their first birthday celebration. As Bischoff thanks both Hall and Nash, he again requests his own show. He then demands "bigger limos and newer Learjets" from Ted Turner. His microphone deadens as the lights flicker.

Suddenly, Sting appears in the rafters holding a vulture. The following poem is read in a young boy's voice: 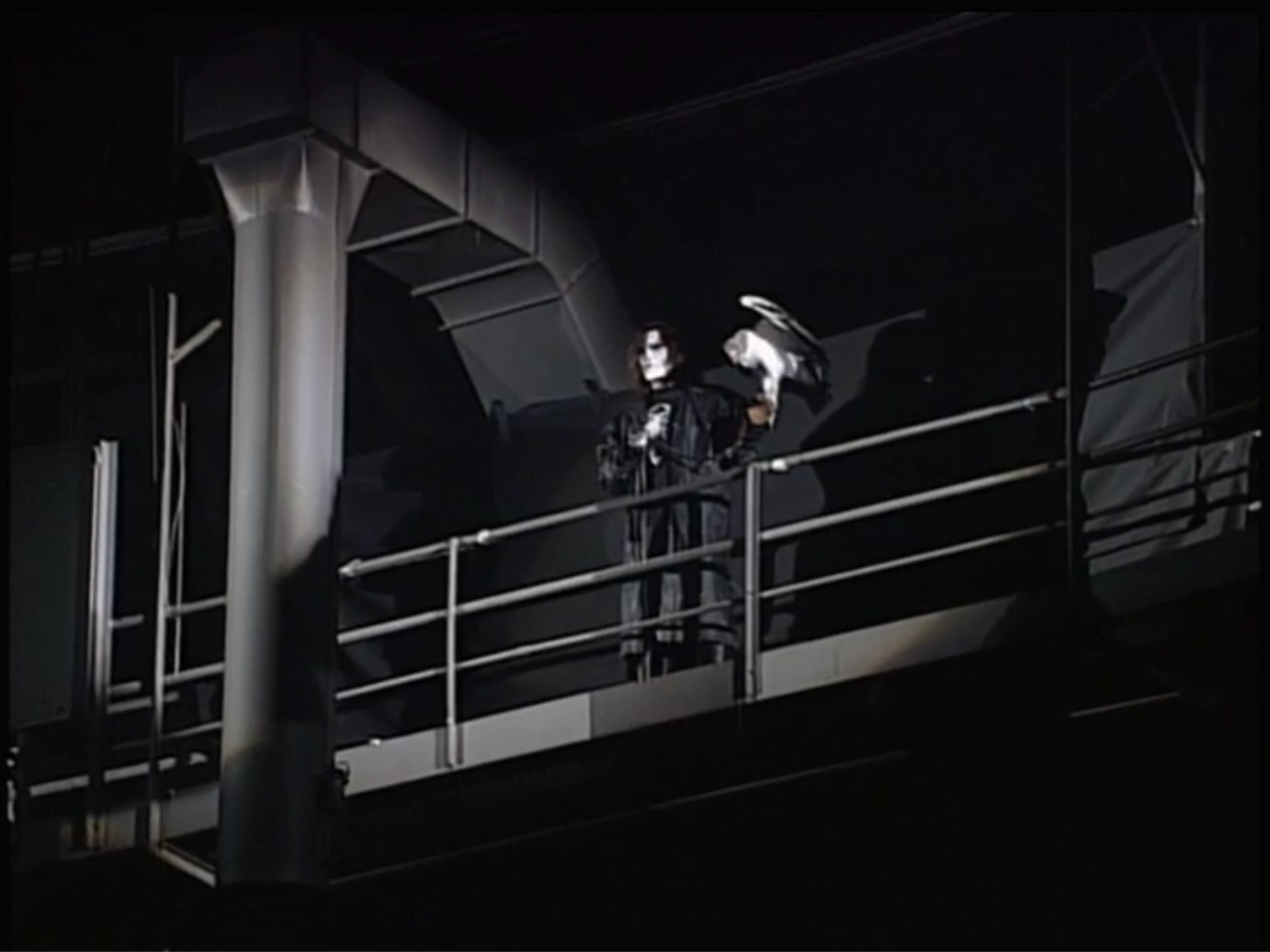 "When a man’s heart is full of deceit, it burns up, dies, and a dark shadow falls over his soul.

From the ashes of a once great man has risen a curse.

A wrong that must be righted.

We look to the skies for a vindicator.

Someone to strike fear into the black hearts of the same men who created him.

The battle between good and evil has begun.

Against an army of shadows comes a dark warrior.

The purveyor of good with the voice of silence and a mission of justice.

The lights dim again for an eternity. When they illuminate, the vulture sits atop the top rope, and the nWo stands in disbelief. Bischoff is supposed to retrieve a note from the vulture, but It's missing. With all the paper in the ring, he should have improvised. According to Meltzer, the note read "Hogan's soul." Without commentary, the show goes off the air while the nWo fear the vulture. 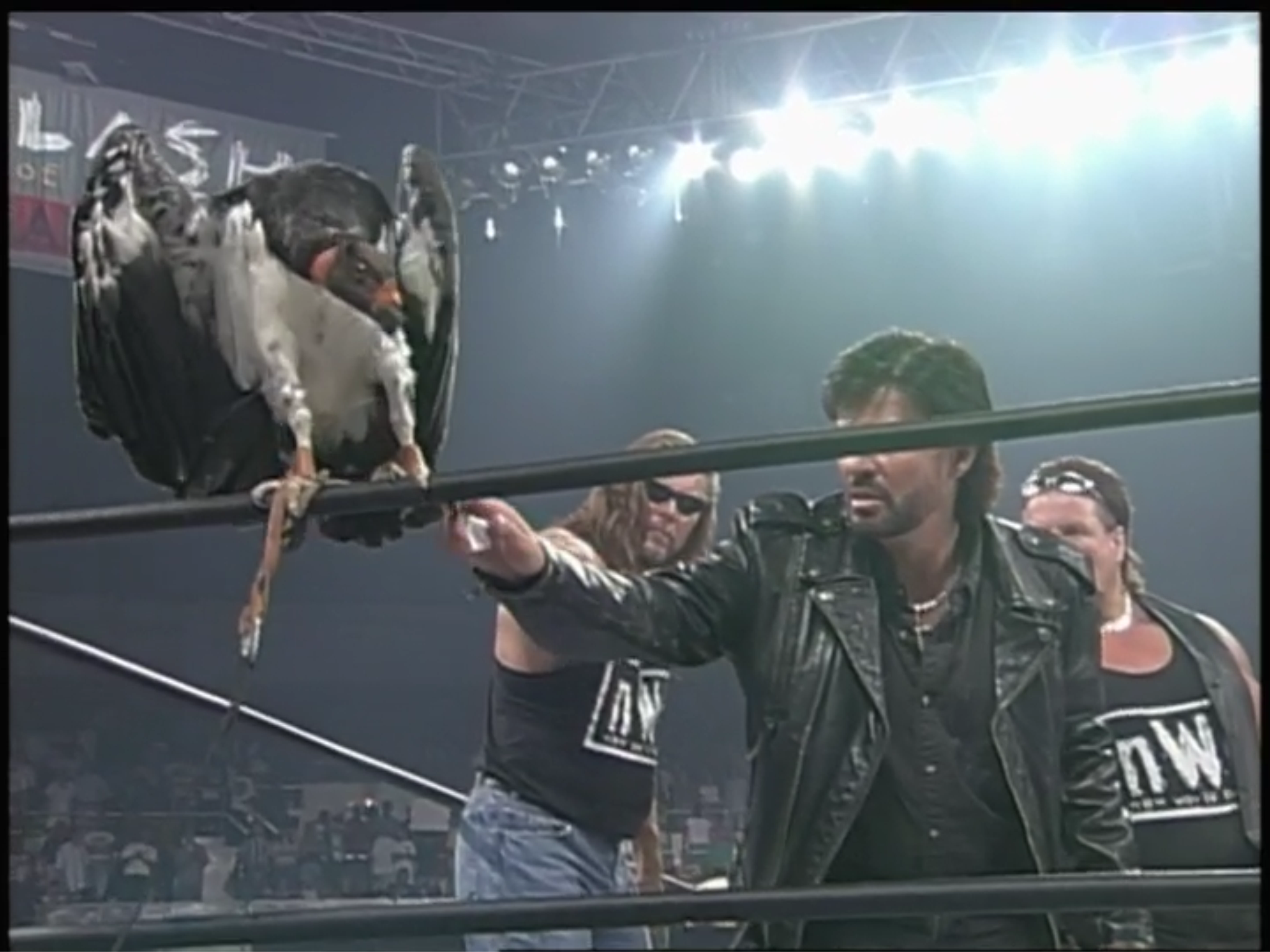 Conclusion: Welcome to the prototype for WCW Thunder. Earlier in the week, TBS executives approved a second live wrestling show albeit on TBS rather than TNT. Having said that, the Clash concept was passe, and Thunder would replace it on a regular weekly basis.

As far as the show goes, two title changes along with progression in the Sting versus now storyline make this an easy recommendation to see. Keep in mind that the show was programmed like Nitro rather than a PPV.