This is a video released by the AWA to showcase its history. Let’s see how good Verne used to have it.

Hosted by Eric Bischoff and narrated by Lee Marshall

To begin the show, an historical look at wrestling dates to the creation of man. Marshall lists numerous wrestlers who were popular in the early 20th century.

A spotlight on babyfaces highlights the Midnight Rockers to Brad Rheingans. After a brief interview segment involving Hulk Hogan and Andre the Giant, “Superfly” Jimmy Snuka fly and Verne Gagne trap Sheik Adnan Al-Kaissie in an inside cradle at WrestleRock ’86.

Next, the heels segment offers us Stan “The Lariat” Hansen beating up a fan at Super Clash along with “Pretty Boy” Doug Somers and “Playboy” Buddy Rose defeating Curt Hennig and Scott Hall for the tag team titles, the Destruction Crew’s abuse of Verne’s lawyer, Colonel DeBeers’ nasty toss of Snuka from the top turnbuckle down to the concrete floor, and DeBeers’ disgusting piledriver on the concrete floor of Snuka. How dastardly!

We cannot ignore the ugliest wrestlers. Included are a crazed Bruiser Brody, Kendo Nagasaki, and Silo Sam. While Silo Sam was tremendously tall, featuring him in the ugly section is a potshot to say the least.

Summary: The St. Paul faithful LOVED Verne and roared when he won.

After Verne retired, the “championship committee” awarded Bockwinkel the championship. 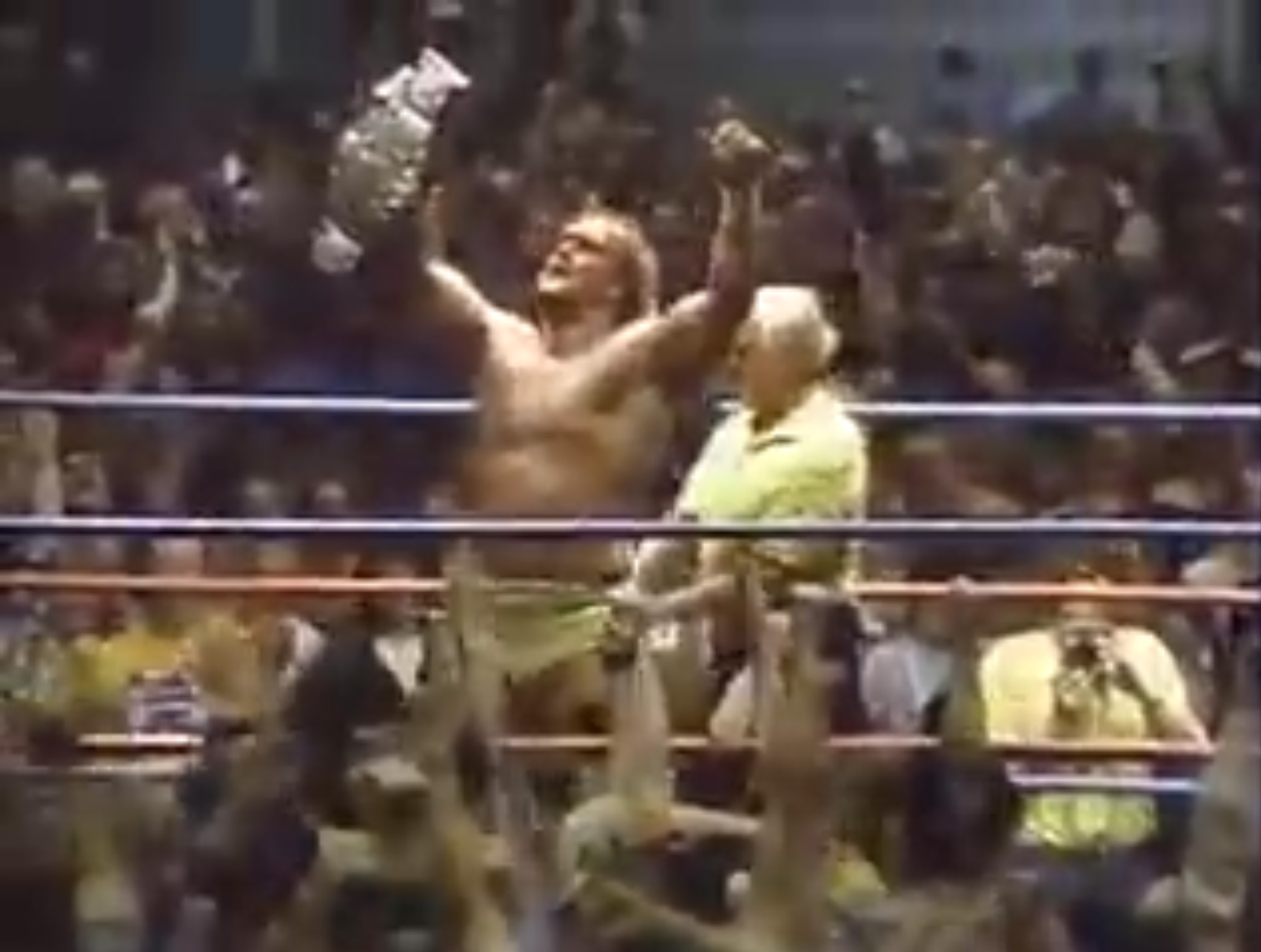 Summary: Or was it? I don’t recall Hogan ever winning the AWA World title. What happened?

The infamous “championship committee” noticed Hogan’s infraction and returned the belt to Bockwinkel.

Surprisingly, Otto Wanz upset Bockwinkel for the title on August 29, 1982 in St. Paul, yet Marshall describes Bockwinkel’s regaining the title on October 9, 1982.

Fast-forward to February 22, 1984, and Jumbo Tsuruta defeated Bockwinkel in Tokyo, Japan. It would not be the last time the AWA World title changed hands overseas. 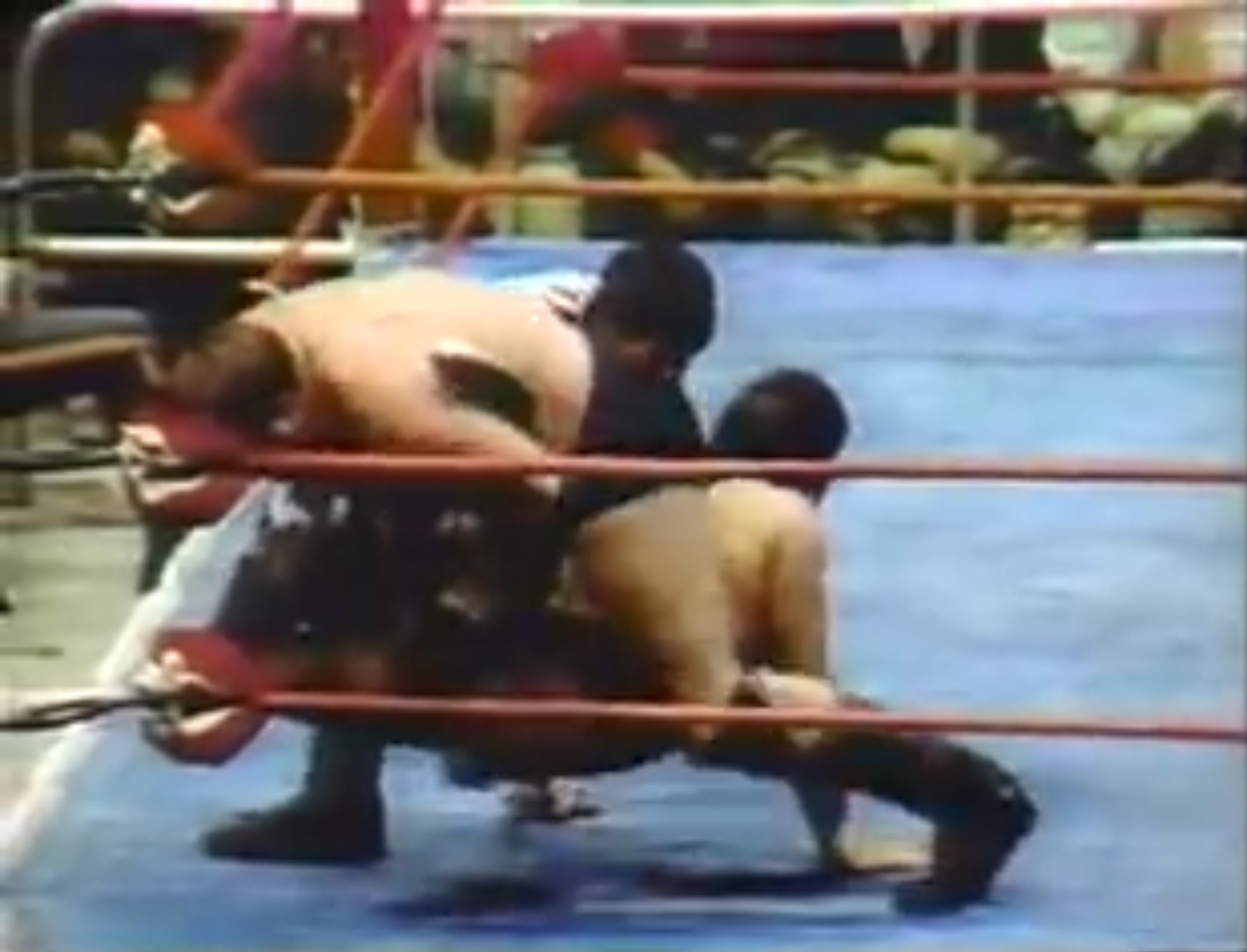 Summary: Hansen stole the title like the diabolical heel that he personified.

However, on June 28, 1986, the “championship committee” stripped Hansen of the title for “failing to appear for a title defense” and awarded the title to Bockwinkel again. What they don’t tell you is that Hansen had title obligations in All Japan, but the AWA wasn’t having any of it.

The ending to the famous yet bloody Bockwinkel-Hennig match from November 21, 1986 is shown. Afterward, we get the ending of the World title match at Super Clash II when Hennig received a roll of dimes from Larry Zbyszko and BELTED Bockwinkel. As a result, he not only turned heel but also became World champion. Despite Ray “the Crippler” Stevens’ argument and dimes all over the ring, Hennig remained champion…until May 9, 1988. Jerry “The King” Lawler defeated Henning in Memphis, TN on that day.

On January 20, 1989, the “championship committee” stripped Lawler of the title for missing several scheduled title defenses and scheduled a battle royal to crown a new champion.

Summary: I apologize to fans of the “Wild Thing,” but he didn’t win. Perhaps Uncle Herbie can help him out.

Summary: A true American hero finally becomes the champion, but for how long?

Once again, the “championship committee” ruled against the title change and returned the title to Zbyszko.

Next, we segue into the realm of tag team titles as Marshall begins with the High Flyers—Jim Brunzell and Greg Gagne. Their biggest foes were the East-West Connection comprised of Jesse “The Body” Ventura and Adrian Adonis. The High Flyers would defeat their nemeses to win the titles on June 14, 1981 in Green Bay, Wisconsin.

Summary: Thanks to Al-Kaissie’s distractions, the Sheiks stole the titles and broke many hearts that night.

The Sheiks held the titles until they encountered the Crusher and Baron Von Raschke on May 6, 1984 in Green Bay, WI. Who would challenge these true AWA legends?

Making their biggest splash to date, albeit as heels, the Road Warriors defeated the Crusher and Raschke on August 25, 1984.

Summary: Enough beef in the ring that the Wisconsin beef farmers were salivating.

Following the match, the Road Warriors face the Long Riders but the match ends in a double disqualification.

Thanks to the Fabulous Freebirds, the Road Warriors lost the titles to “Mr. Electricity” Herb Abrams Steve Regal and “Gorgeous” Jimmy Garvin on September 29, 1985.

Garvin and Regal’s title reign would last until Regal left the AWA in January for the WCWA.

Who were their successors? They were none other than Curt Hennig and Scott Hall.

Summary: A travesty of justice.

Summary: Without question, I truly need to reflect upon this match in its entirety.

After the match, Michaels launches himself at Rose while the Vegas faithful have LOST THEIR MINDS.

On January 27, 1987, the Midnight Rockers would finally get their hands on the tag team titles in St. Paul, MN by beating Rose and Somers.

Unfortunately for the Rockers, they lost the titles to Boris Zhukov and Soldat Ustinov on May 25, 1987 in Lake Tahoe, NV. Perhaps they spent too much time fishing.

Although Zhukov fled to the WWF, Somers substituted for him. That didn’t help them against Lawler and Bill Dundee on October 11, 1987 as they lost the titles.

In an effort to boost attendance, Lawler and Dundee lost the titles on October 19 and regained them on October 26.

Methinks Verne wasn’t too thrilled with these shenanigans, so he booked Lawler and Dundee against the Original Midnight Express. Much to their dismay, Lawler and Dundee lost to them on October 30, 1987 in Whitewater, WI.

Summary: For the second time, the Midnight Rockers were world champions.

Summary: Methinks the Midnight Rockers got a call from Vince, and this chicanery was booked.

Badd Company would hang onto the titles for over a year before encountering the Olympians—Ken Patera and Brad Rheingans. When heel miscommunication from Diamond Dallas Page caused Diamond to be knocked OUT COLD, Rheingans pinned Diamond to win the titles on March 25, 1989.

According to Marshall, the up-and-coming team of the Destruction Crew put Patera on the shelf, and the titles were vacated on September 18, 1989. 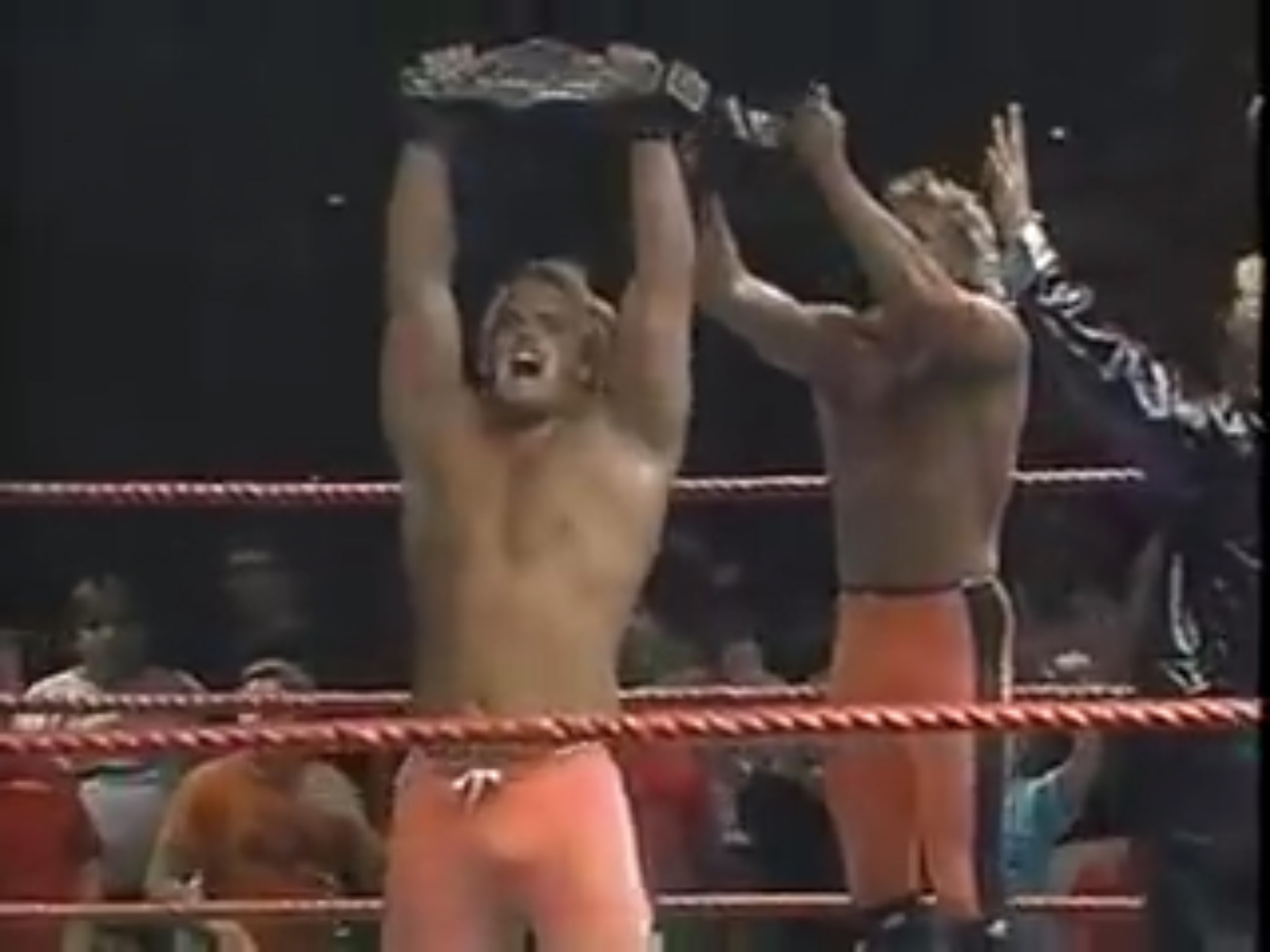 Summary: Another travesty of justice by the heels to attain glory. It was cool to see a young Rodney Anoa’i.

Beginning with Super Sunday on April 24, 1983, Marshall describes 19,000 spectators in the St. Paul Civic Center along with another 10,000 folks “next door” watching on closed-circuit.

Afterward, on April 20,1986, WrestleRock ’86 took place at the Metrodome in Minneapolis, MN. Highlights of the Road Warriors versus Michael Hayes and Jimmy Garvin are shown.

Promos include the Crusher wearing a chapeau and bowtie, Dusty Rhodes wearing a Stetson in a swimming pool, an extremely young Curt Hennig dated May 12, 1984, and a clever but snide Jesse “The Body” Ventura wearing long sideburns and beard, “Mad Dog” Vachon in his attempt to build a casket, the “Incredible” Hulk Hogan, an always perturbed Stan “The Lariat” Hansen who touted “a big, fat wife and nine kids,” the Road Warriors, and a wrestler whom I cannot name who destroys the wall before getting screamed at by Larry Nelson.

Devastating moves feature a lariat by Hansen, a back elbow by Animal, Jerry Sags’ of the Nasty Boys taking a header on the ring post (and possibly losing his front tooth), a big boot from Nord the Barbarian, a belly-to-back superplex from Paul Diamond, a Wrecking Ball from the Destruction Crew, and many others.

Conclusion: Eighty minutes that are well worth your time.

If you’re an AWA historian, then you realize the tape was created prior to Super Clash IV when Larry Zbyszko regained the AWA World title from Masa Saito on April 8, 1990. Back on February 10, 1990, Zbyszko had lost the title to Saito in Tokyo Japan.

If you’ve never seen AWA action and want to see your favorites blossom, then you owe it yourself to check it out.

If you’ve forgotten how fun the AWA was during the 80s, then put it on your calendar.

The video was a cash grab for the dying promotion that put a litany of wrestlers on the map yet let them go become legends elsewhere.

Here’s the theme to their show when they aired on ESPN.