Can Greg defeat Curt and become World champion? Will the Midnight Rockers regain the gold against the Original Midnight Express? How will Nord the Barbarian fare against a member of the Sheik’s army? Be careful around the Christmas tree, gather around, and enjoy the festivities.

Summary: Nothing impressive whatsoever. It’s 1987, if you can’t get fans to boo you, you’re not a good heel, Nick. Canada’s greatest athlete, eh?

After the match, Snow backdrops the crafty Kiniski who seeks refuge outside the ring.

Summary: Though predictable, Miceli’s costing West the match keeps the heat on Kelly no matter how boring and limited he is.

Summary: The match was clipped to almost nothing, but since Nord was the hometown hero, he got the spoils. I’ll bet Ustinov’s mother was in attendance secretly rooting for her boy. Why? Because Ustinov was a Minneapolis guy named Jim Lanning.

Summary: Nord got some revenge against his former manager.

This match was sponsored by Schmidt beer out of St. Paul. Have you tasted it? Let me know. 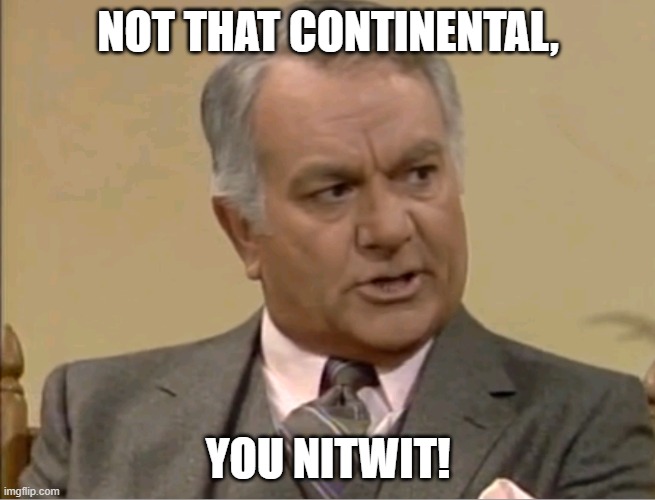 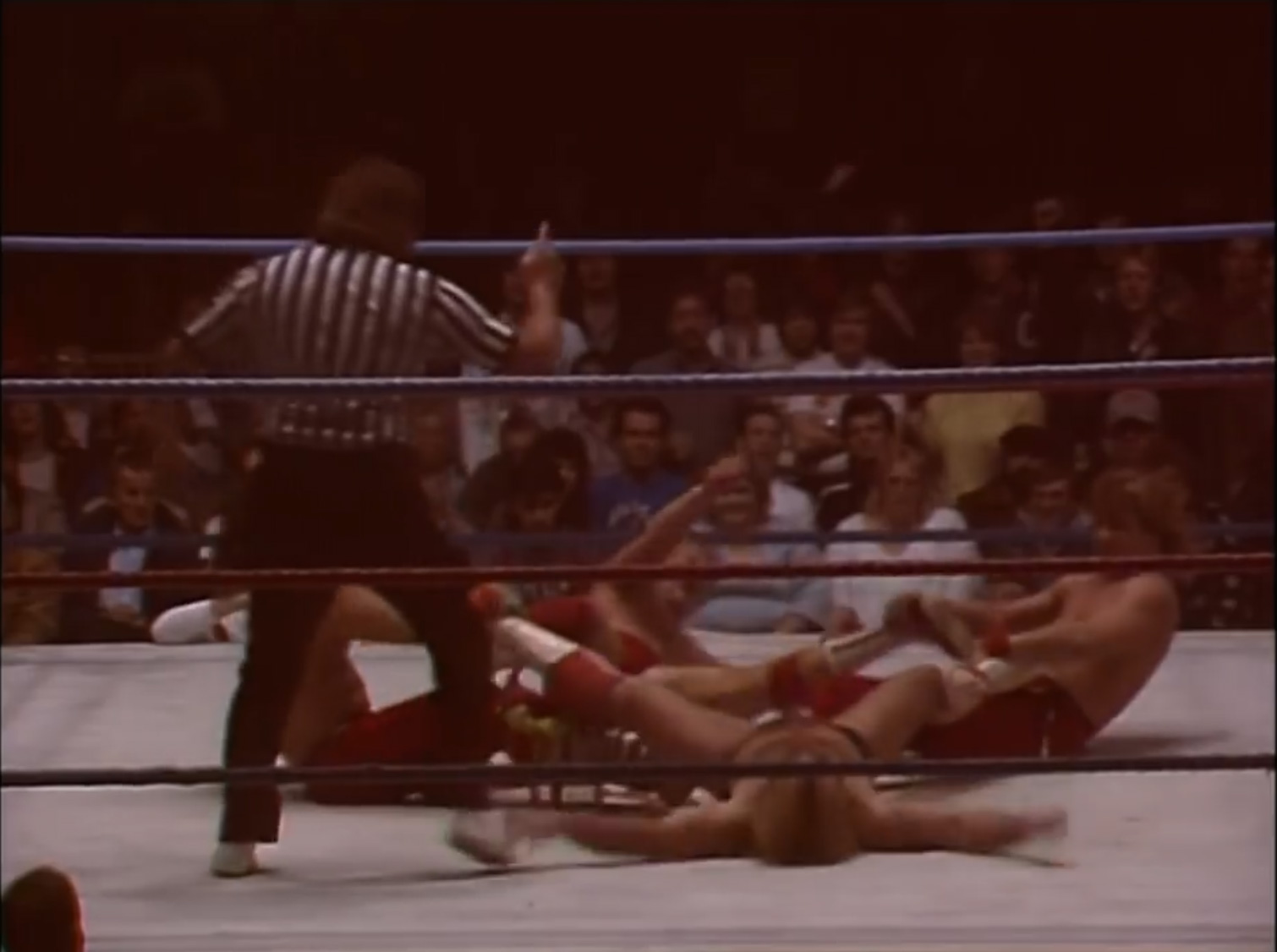 Summary: Despite the infuriating clips, this is an exciting match that begs for a rematch. Although some would say that the Midnight Rockers should have won here, building a rivalry that could infuse house show attendance is the better business move.

Summary: Unless you needed to see two overweight guys fighting over a cellular phone, this was the popcorn match.

After the match, Adonis and McDaniel brawl on the concrete floor until McDaniel obliterates both the cellular phone and DeRusha in one shot. That’s one pissed-off Native American, folks. 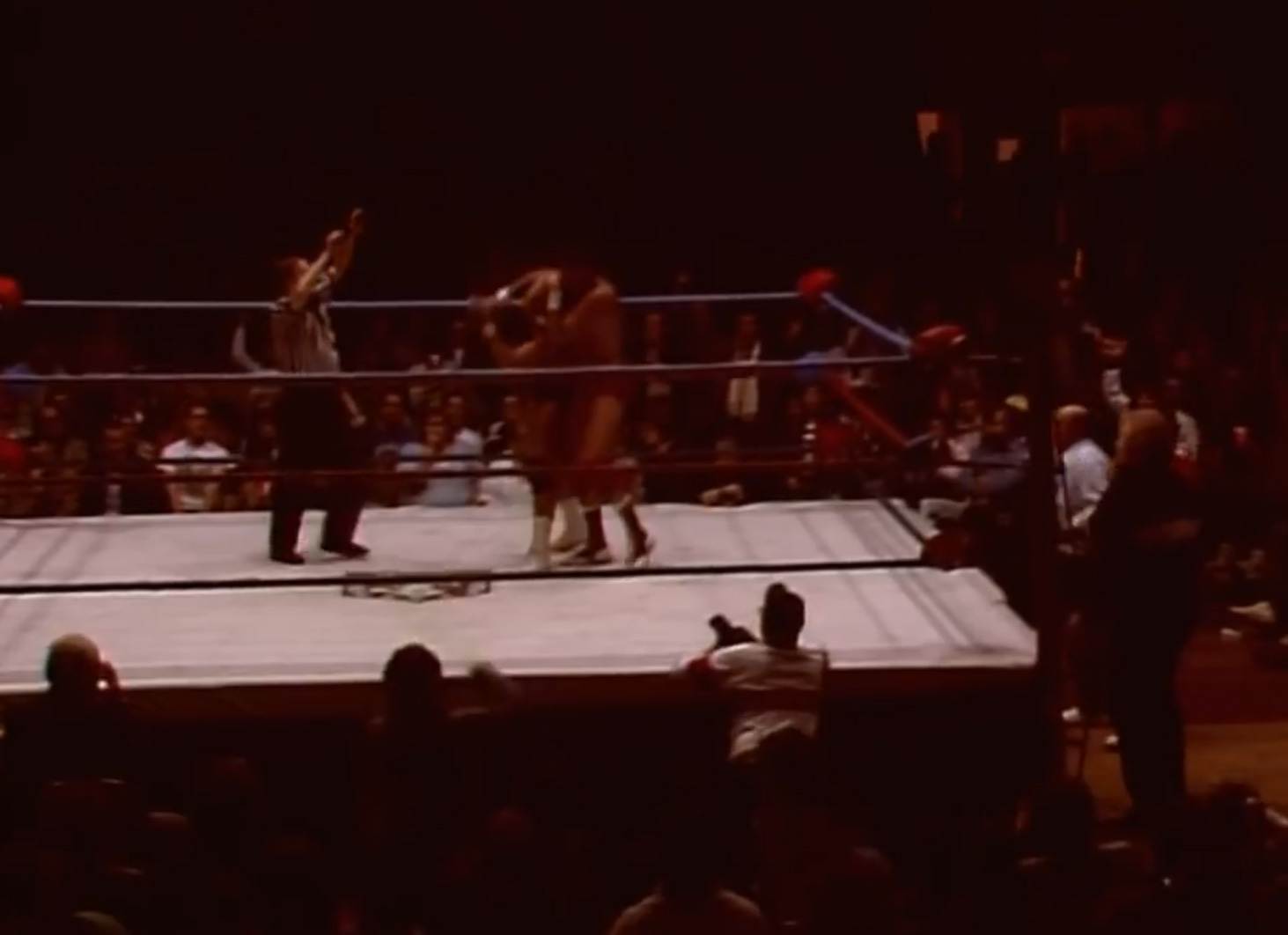 Summary: I had much higher expectations for this match; however, it became more of a father versus father and son versus son neighborhood match than a World title match.

Afterward, Verne jumps into the ring to protect his son, but Larry precludes him from doing so. Referee Marty Miller tries to intervene, but Curt slaughters him. As the Midnight Rockers storm the ring to calm things down, Curt helps his father battle a beleaguered Verne. More wrestlers spill into the ring to break up the melee, and Larry blasts Greg. While order is restored, Greg is BUSTED OPEN. 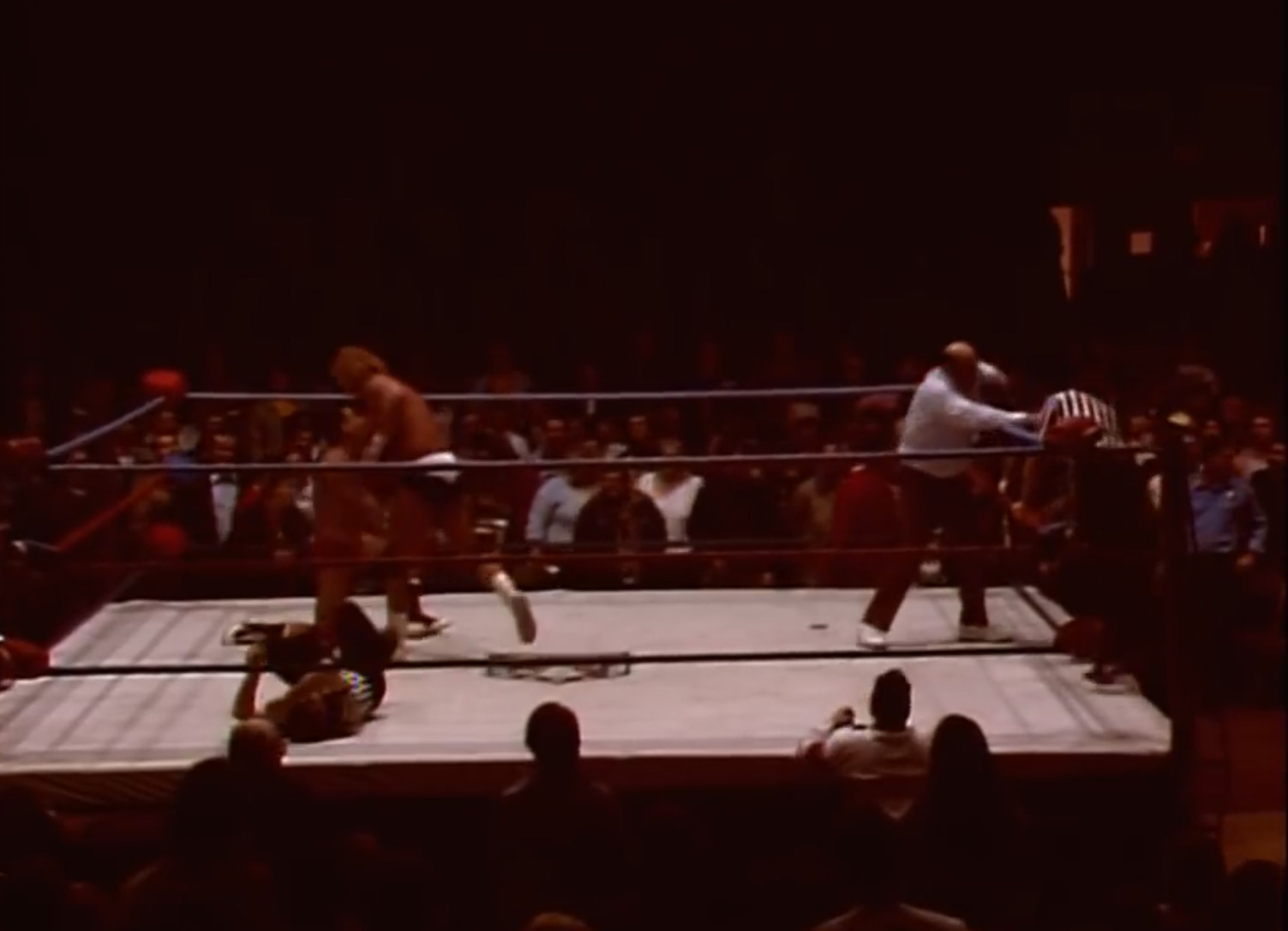 Following the show, Larry Nelson interviews the Midnight Rockers. Jannetty claims shenanigans with the thirty-minute time limit. When Michaels puts over the Midnight Express, he and Jannetty vow to regain the titles. 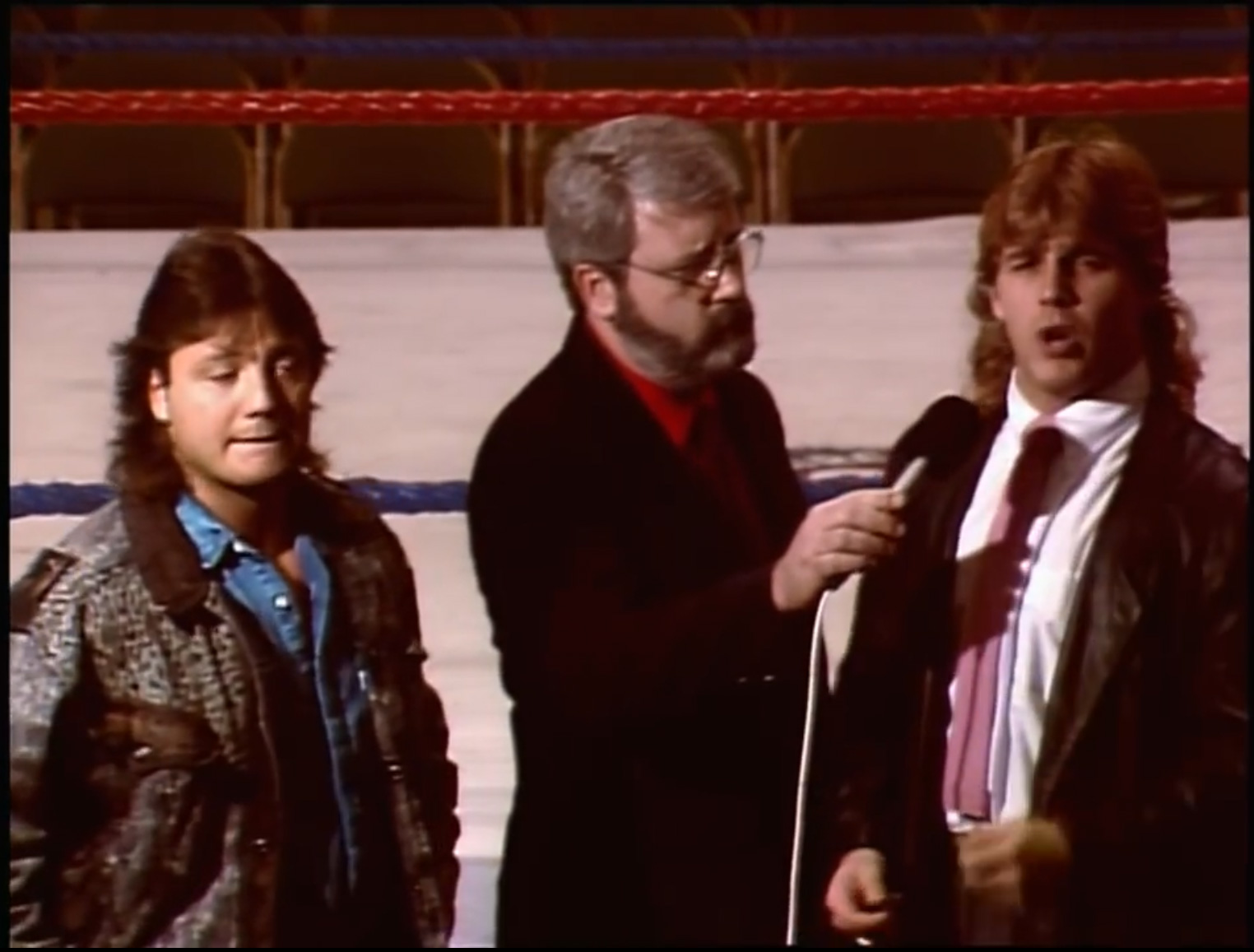 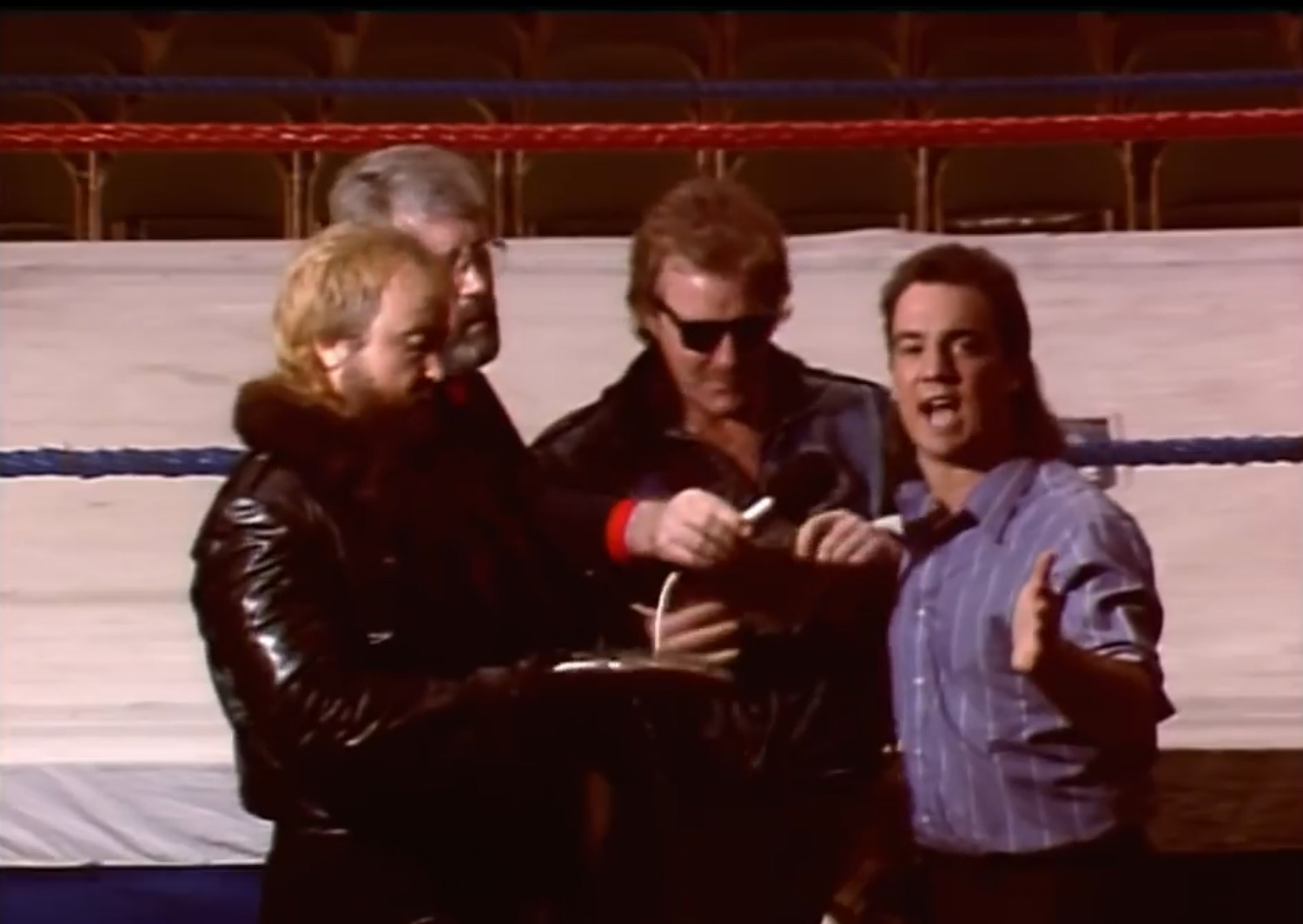 Nelson interviews Greg who wears a bandage on his forehead due to the belt shot. While Greg gripes about Larry’s interference, he wants to settle things once and for all with Curt. 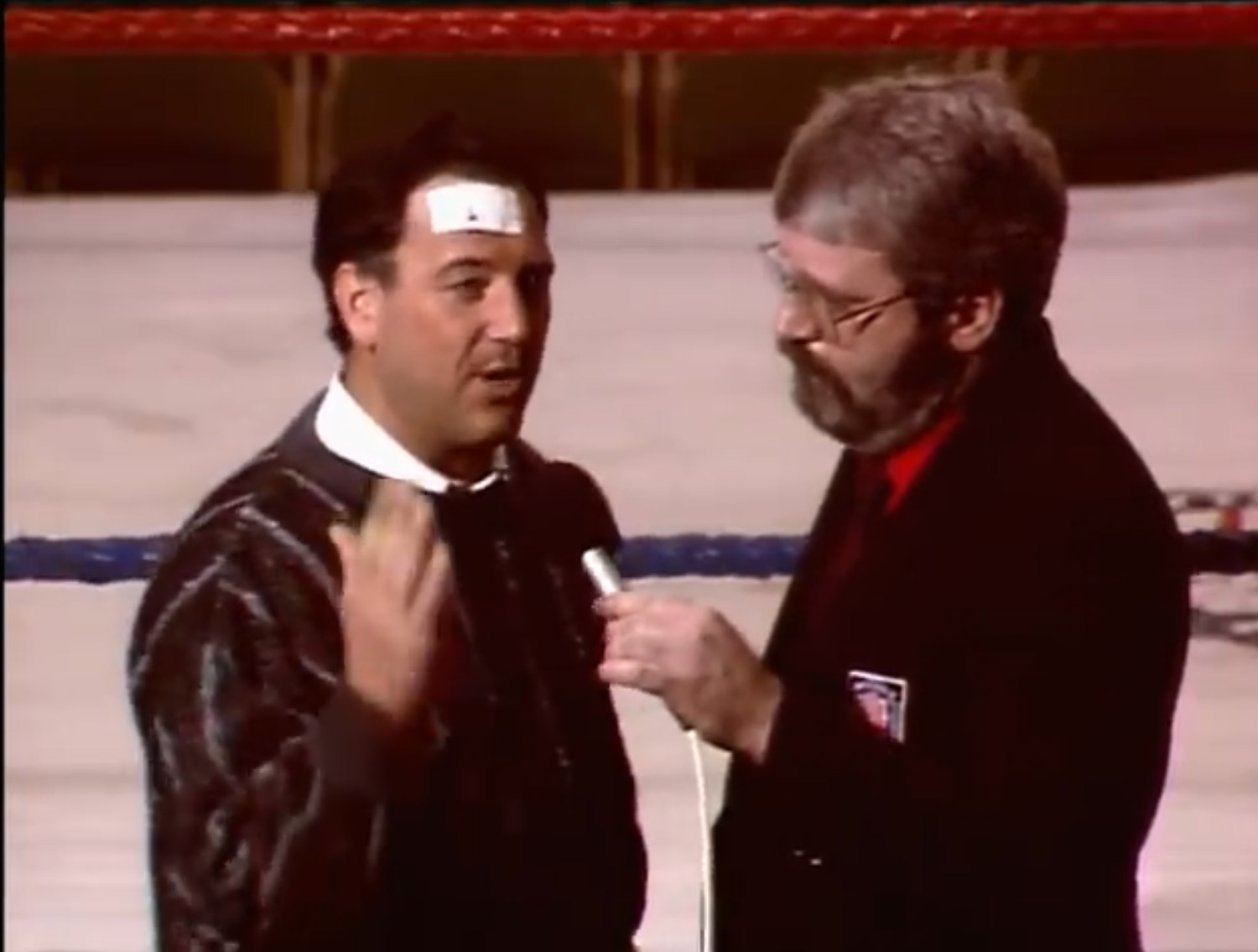 Following that, Nelson interviews a disheveled Verne who contemplates coming out of retirement to deal with the feud between the Gagnes and Hennigs. 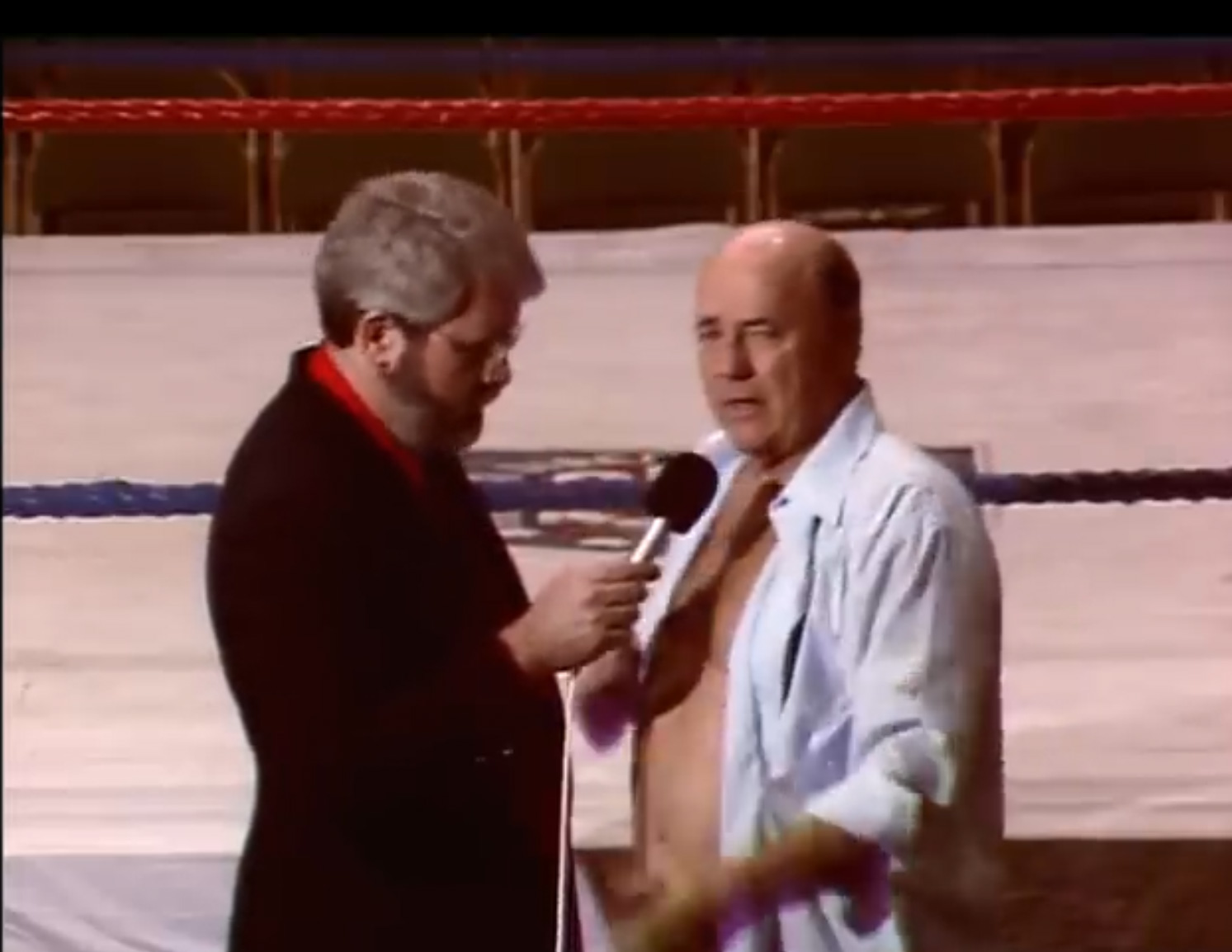 Nelson interviews the Hennigs. As Larry questions the Gagnes’ intelligence, Curt, holding a broken title belt, compares the Gagne sleeper to a “choke hold.” The notion that Greg gets another shot at the title has Larry laughing, and Curt threatens to sic his little sister on Greg. HA! Any match, anytime. 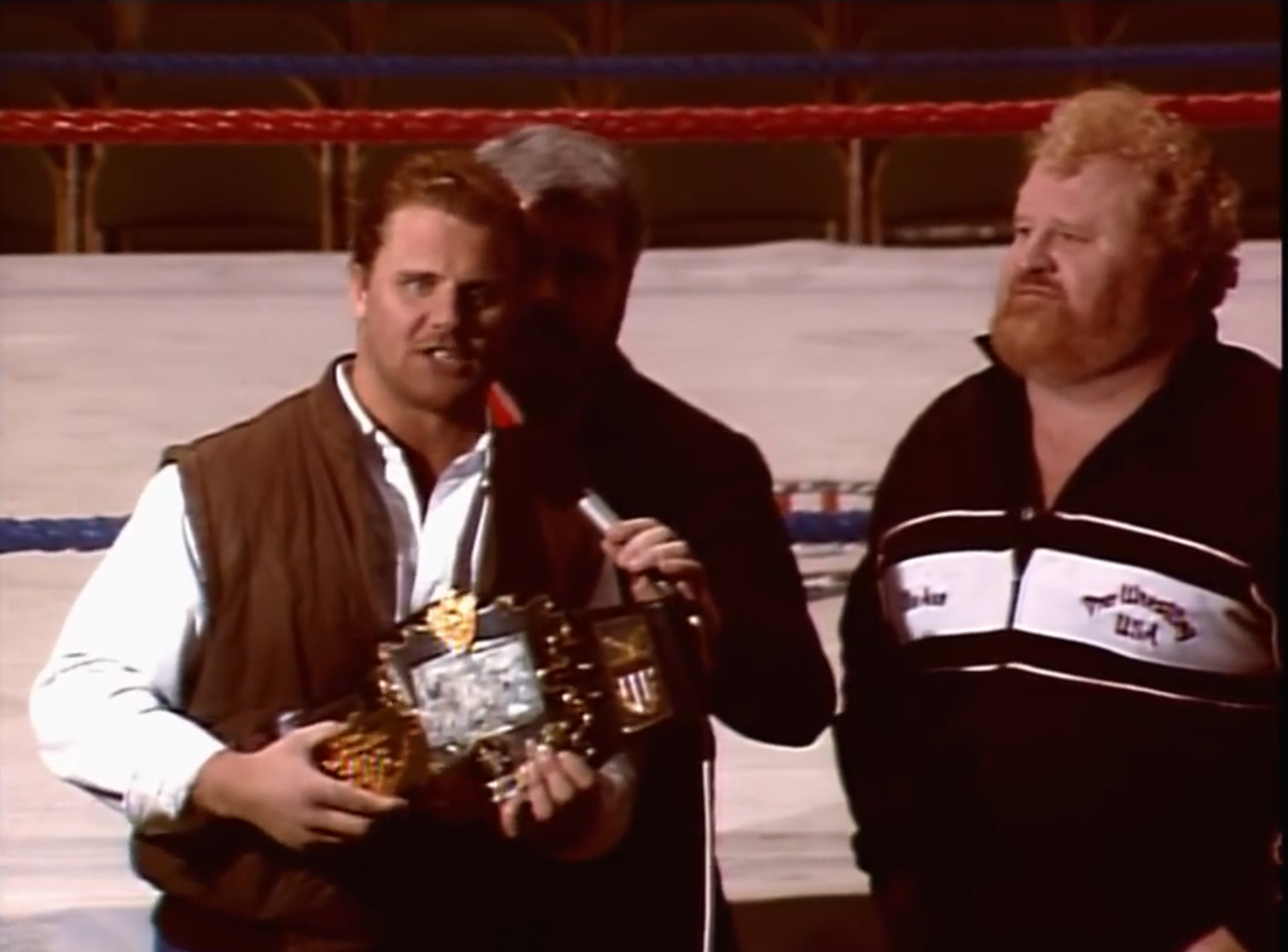 In the final interview, Nelson speaks to Adonis with Dangerously. Adonis runs down Tommy Rich, Roddy Piper, and McDaniel. A second take is shown, and Adonis buries McDaniel. 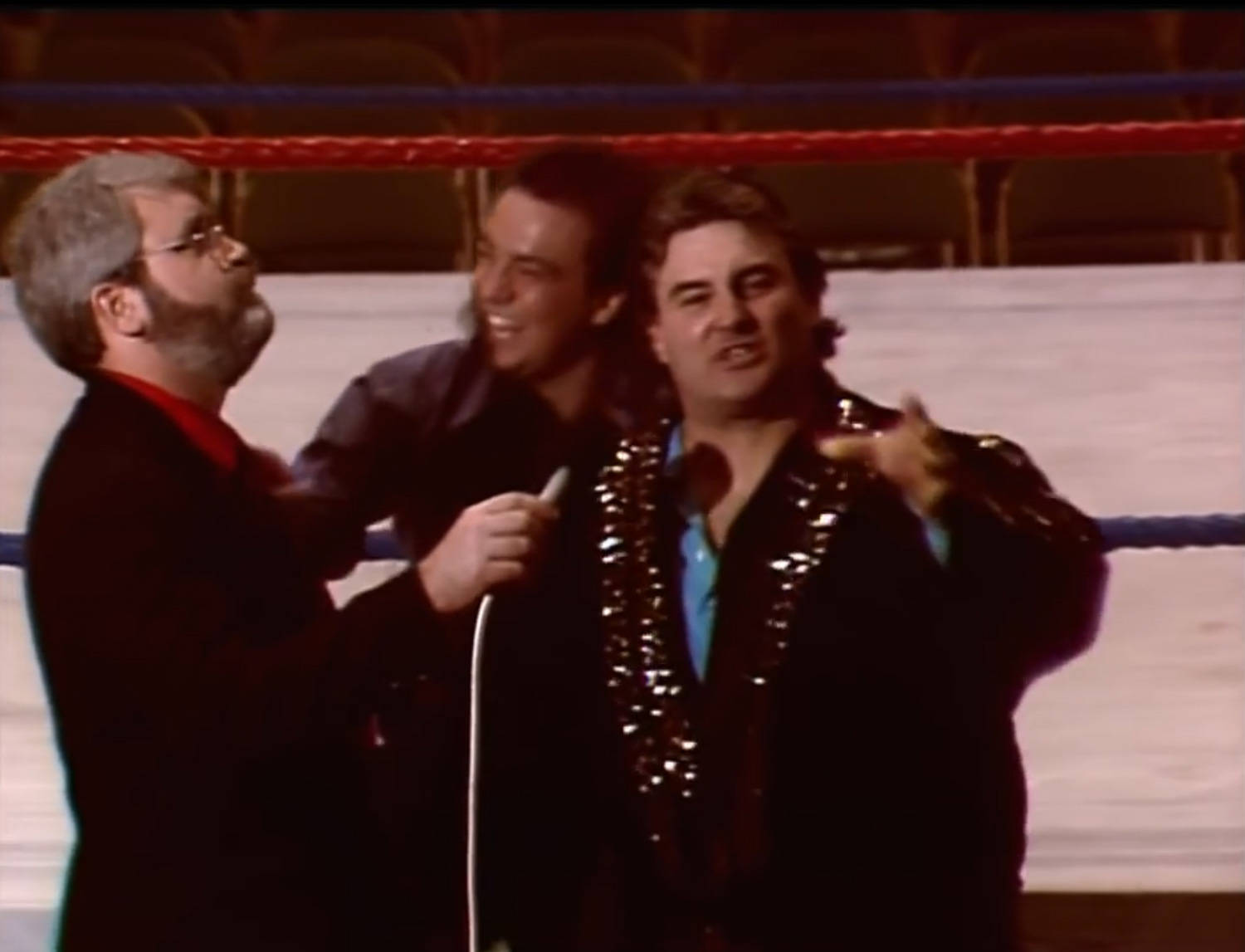 Conclusion: Production-wise, this show was AWFUL. The dimly lit arena combined with poor production values truly made this show look bush-league. In addition, the family feud between the Gagnes and Hennigs should have been completed on this supershow. Instead, Curt and Greg will continue to host diminishing crowds.

On the other hand, the returning Midnight Rockers are a breath of fresh air to a promotion in dire need of one. Hopefully, we see more and more of them in the coming episodes. As far as the Adonis-McDaniel match goes, if I wanted to see two old fat guys get into it, I’d go down to the local tavern. Nord as a babyface is intriguing; however, it’s instant heat against the vile Al-Kaissie and his army. The less said about Kiniski and Kelly the better.

Unfortunately, I cannot recommend this show as the quality of wrestlers in the AWA is truly lacking. Fingers crossed, the new year’s episode can wash the bad taste this show left behind.