This is the first supercard under the Turner umbrella as Ted Turner officially purchased Jim Crockett Promotions on 11/2.

Starrcade ’88: True Gritt will be live on PPV on Monday, December 26 at 7pm ET. Call your cable operator now!

Tony Schiavone and the “Total Package” Lex Luger are in the booth as Luger bungles his lines.

Prior to the next match, Rotunda calls Rick Steiner “stupid” while Sullivan calls him “dumb.” I bet Bo Schembechler begs to differ with them. Summary: Showcase match for the freshly heel-turned Williams. He should have dominated Stallion rather than wrestling him for fifteen minutes.

After a commercial break, Magnum T.A. reports that although Nikita Koloff quit the promotion, the Junkyard Dog returns to the NWA! This time, it’s to help Ivan Koloff destroy the Russian Assassins and Paul Jones. I don’t believe that’s the legitimate reason, but I digress. In fact, should Ivan and JYD win the tag match at Starrcade ’88, the Assassins must unmask and Jones must retire. Good luck fulfilling that stipulation.

Summary: I think these old geezers could have settled their difference over gin rummy instead of this garbage.

After the match, the Russian Assassins hit the ring to attack Koloff. Shortly after Russian Assassin #1 mounts the second turnbuckle and delivers a knee drop, JYD runs in with his chain to scatter Jones’ men.

Upon completion of a commercial break, Luger and Schiavone preview the next match.

Prior to the next match, Magnum interviews former Varsity Club member Rick Steiner who mentions his “friend”/hand puppet Alex. Steiner’s ready to beat Rotunda for the World TV title at Starrcade.

Summary: This is just a preview of what will happen at Starrcade between these four guys. Let’s move along.

After a commercial break, Luger removes his jacket yet somehow keeps his composure. Take it easy, Lex. Starrcade’s not for another nineteen days. 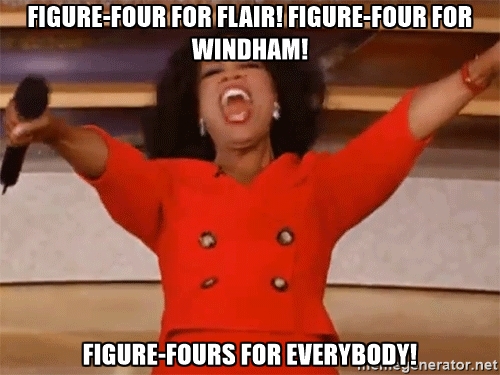 Summary: Awesome tag match that keeps you on the edge of your seat awaiting what happens next. Seek out this main event STAT.

Don’t forget to order Starrcade for Christmas this year! It may not be a new bicycle, but it’s better than a lump of coal.

Ross and Caudle then revisit the highlights from the US tag title match and the Rhodes/Animal match.

Schiavone and Luger then revisit highlights from the main event. Luger states that he is ready for his no-DQ encounter for the NWA World title at Starrcade.

Conclusion: With a great opener as well as a great main event, I wholeheartedly recommend this show to all wrestling fans. While the WWF tries to cover up its weakness in wrestling quality with pizzazz, the NWA delivers impactful and enjoyable wrestling action from beginning to end.

See you for AWA SuperClash III!